React: How Are Pokémon Go Trainers Reacting Online to the Latest Update?

Updates to Pokémon Go this weekend have seen fans of the game complaining in their thousands. Brandwatch unpicks the reaction on social

Pokémon Go’s latest update has caused uproar with gamers, less than a month since the game’s release.

It’s early days and the game hasn’t been without its faults, plagued with slow servers and bugs. Speaking at Comic-Con, Niantic CEO John Hanke apologized for some of the problems, saying they simply weren’t prepared for the levels of popularity the game has enjoyed.

The community has been fairly forgiving – perhaps caught up in a haze of nostalgia and wonder at the game’s more positive points.

But things have changed. As Sunday’s update was released and Pokémon trackers began to disappear, social sentiment towards Pokémon Go hit an all-time low since it’s original release. 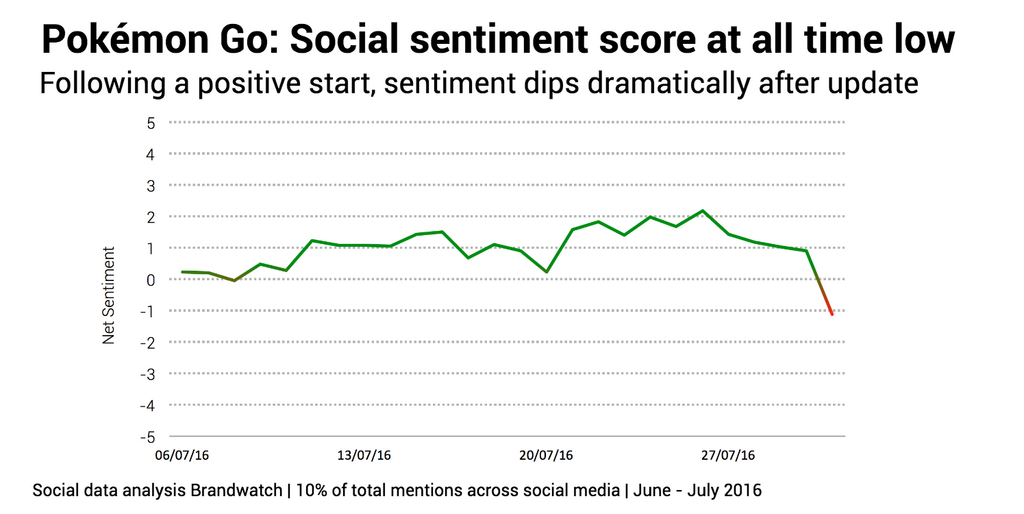 (The social sentiment score reflects the balance of mentions that are categorized by Brandwatch as most likely positive or negative across social media).

On Sunday the latest update of the game was released with a number of changes.

You can read the full list, including the minor bug fixes here, but these are the main changes being discussed. 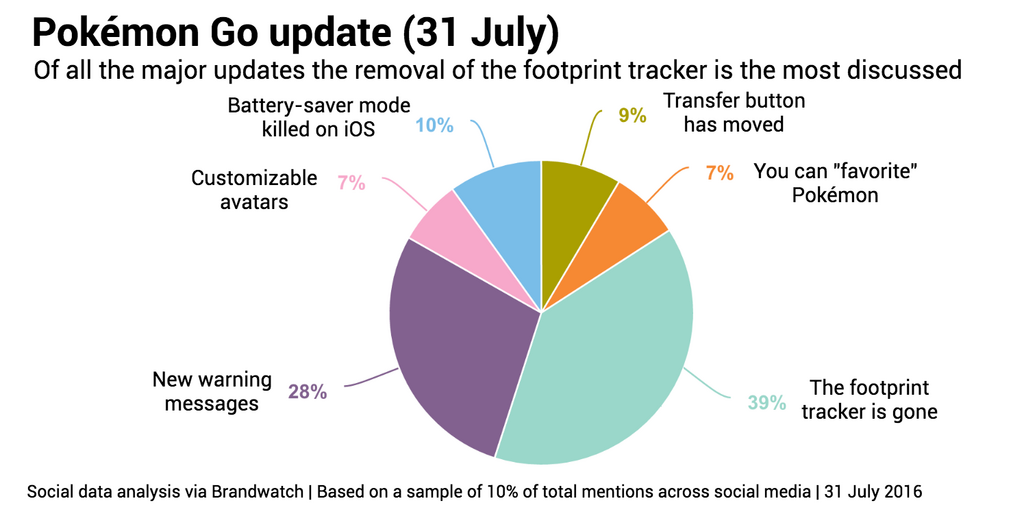 The fact that users can now “favorite” Pokémon, meaning they can’t be accidentally transferred, has gone down fairly well.

Meanwhile, being able to customize your character after the initial set up is a welcome update for many – Team Mystic had previously not been able to choose clothes that matched the color of their team.

Team Mystic is said to be the most popular team, and our data shows it gets the most support online.

Moving onto the unpopular aspects of the update, removing battery saver mode on iOS hasn’t made many people happy but of all the updates it’s the removal of the footprint tracker that has caused the most controversy.

The ability to track down and hunt Pokémon is kind of the point of the game, but players’ ability to do this effectively has become increasingly hard recently.

When you see one of Eevee’s evolutions in the wild in #PokemonGO but remember the three footstep bug still exists… pic.twitter.com/5xSREZfyLP

The so-called “three footstep bug” meant that in the “Nearby” feature Pokémon all appeared as three footsteps away despite users actively hunting them.

The number of footsteps (which represent distance) never changed. While the feature could tell you if a rare Pokémon was nearby, it became totally redundant in terms of heading in the right direction to find it, leading to a lot of frustration.

The game’s update failed to deal with the bug, instead removing all footsteps from below Pokémon that are nearby. It’s not exactly helpful and it’s annoyed a lot of players.

There haven’t just been tracking issues in the game, though.

Third party #Pokémon trackers like Pokévision, which in many ways patched up flaws with the official game, have begun to disappear. The disappearances occur just after Niantic CEO John Hanke said he “wasn’t a fan” in a recent interview with Forbes.

The online reaction towards the games’ developers has been pretty unrelenting over the last 24 hours, with r/pokemongo, a subreddit dedicated to the game, dominated by posts calling out Niantic for the changes.

But there is hope for the wildly popular game. If the footstep tracker is fixed and users can hunt Pokémon without walking for miles in the wrong direction, we’re pretty sure the reaction will die down.

After all, what Pokémon Go has already achieved is incredible, and there’s still plenty of fun to be had.

Are you a journalist looking to cover our data? Email us [email protected] for more information.