“I Was So Productive Today” and Other Lies We Tell Ourselves

The Brandwatch React team searched for people humble bragging about being productive to see if we could spot some patterns. Turns out there are a few.

When I first pitched the idea for this blog post to our React editress, Gemma, I thought I was going to uncover the secret to staying productive at work during the holidays, a time we all know our outputs go the way of the dodo.

Instead, I dived into Brandwatch only to discover we’re all just lying to ourselves and each other about what productivity truly is.

A whole lot of nothing

Before I started looking at when we’re most productive and what makes us so, I took a quick look at when we’re least likely to be doing much.

We all know as we head into December and the holidays our productivity is in danger of slowing down, but actually, it’s those hot summer months of June and July that really take a dip. We’re too busy sunning our hot dog legs at the beach to do much of anything else, I suppose. 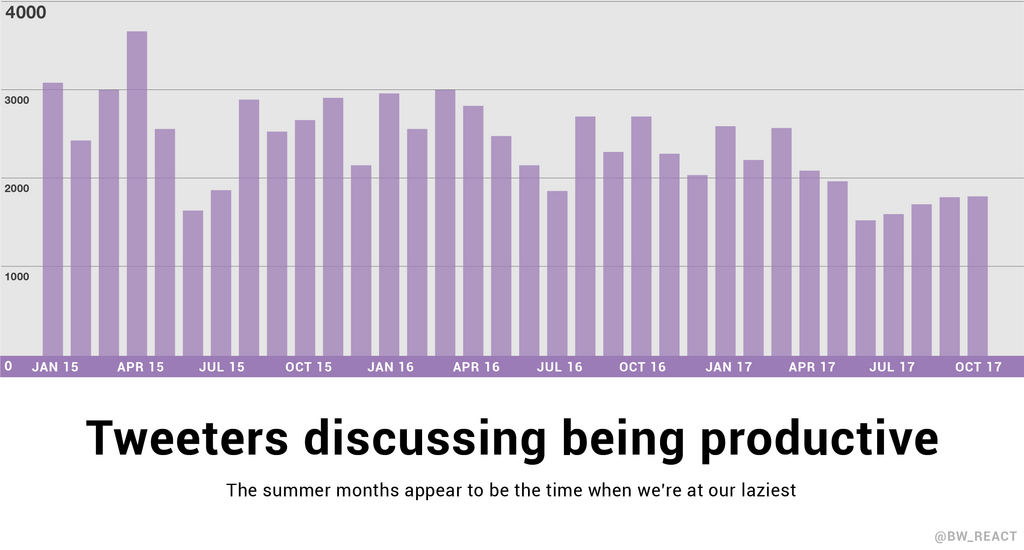 Something should be said for Sunday, though.

Perhaps a name change to “day of production” is in order, because according to my data, it’s a fairly productive day of the week – even when we know it’s one of our most hungover days.

For all I know, we’re just giving ourselves some hefty pats on the back for making it out of bed and getting our Domino’s in 30 minutes or less. 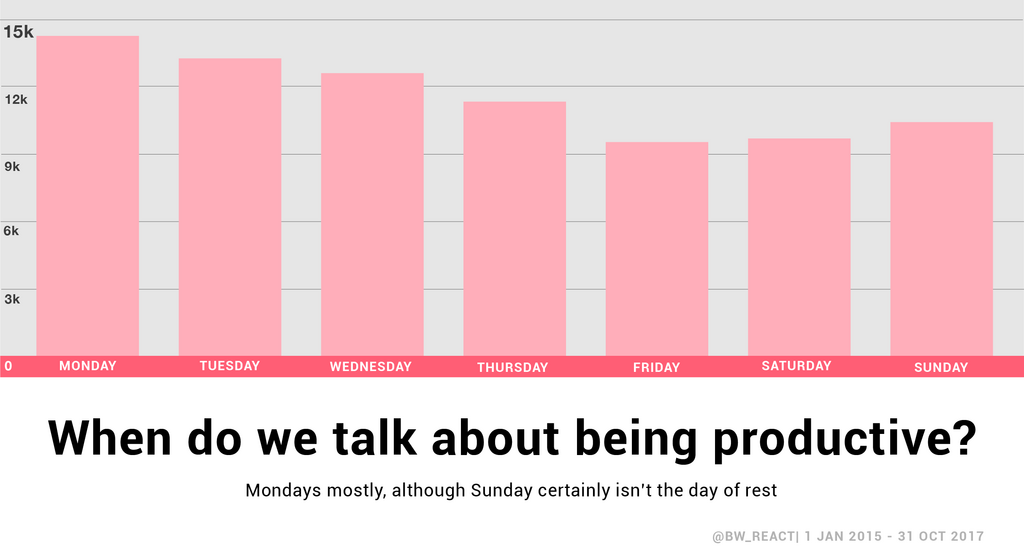 So when are we actually productive?

It looks like it’s usually at the beginning of something. Front of the week looks pretty up there, with Monday taking the crown for most productive day. And then you have January, when we’re all trying to prove once and for all we can stick to our New Year’s resolutions and keep up with our emails. Though according to the graph above, those goals have usually gone kaput come summer.

An interesting point of note is a jump in March and April. Something to do with tax season, maybe?

So I got an idea of when we’re not producing much for society and roughly when we are, and then I wanted to go deeper.

Looking at mentions of “I’ve been productive” or “I have done loads” (and similar terms), I didn’t find anything too shocking initially. 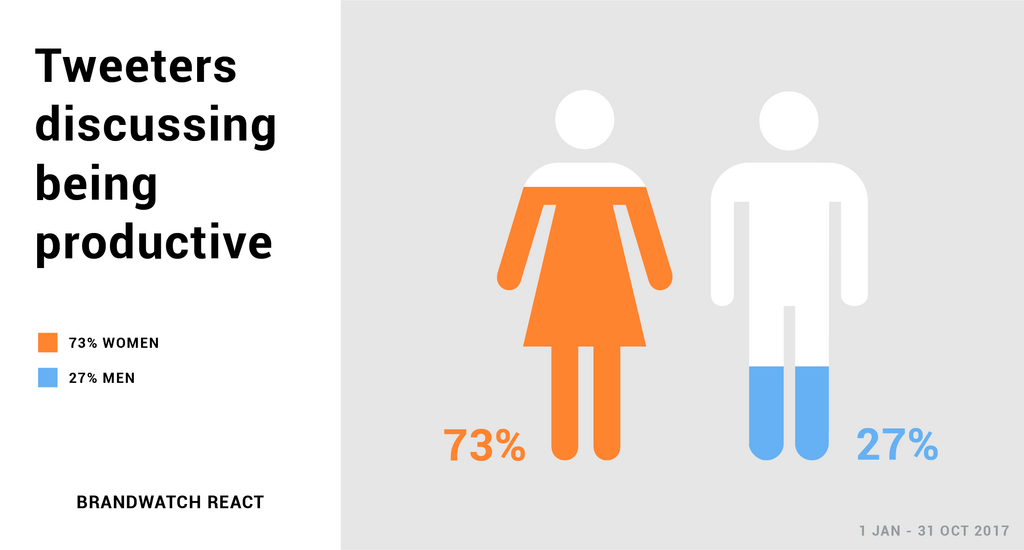 Diving into mentions, I discovered a quandary. Everyone is congratulating themselves on being productive but nobody is actually saying exactly what they did. We may never know. One thing I can suss from the data is the majority of producers are surprised it happened at all. And as many more need a nap.

I've been so productive today I could honestly scream in shock

Alright I’ve been hella productive today. I deserve a nap.

If you made your bed and didn’t tweet about it, did it actually happen?

But I’m still stuck. What has everyone done that’s so productive? I’m trying to find some inspiration here, after all.

I took a look at the topics cloud to see if I could find some more clues. And there it was, staring me in the face. 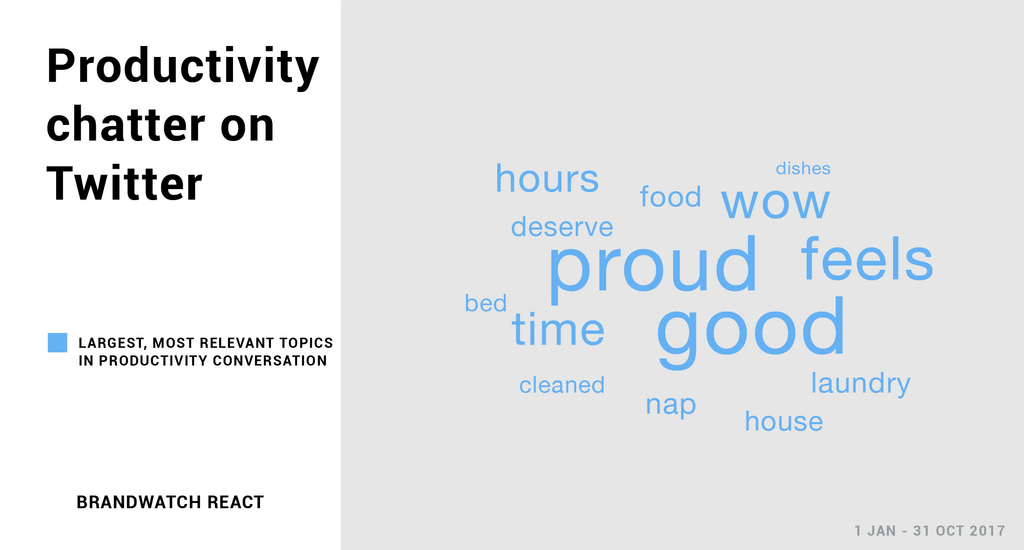 “House”, “cleaned”, “bed”, “laundry”, “dishes”, “food”. The social media definition of productivity appears to be getting chores done and life admin taken care of. It’s not about what you put out. It’s about what you put away – your clean laundry.

The lies we tell.

I’m not satisfied. I wanted to go on a social journey that would lead me to the secret to staying productive when the sun goes down at 4pm. Instead I’m coming to a sad realization.

We don’t even know what productivity is anymore.

And worse than that is this little insight I found: Sometimes our surprising spurts of ‘productivity’ are simply a reaction to not having something else to do, like check our Facebook.

Im turning my phone off and imma be productive today, get shit done for once

It used to be that social media was a distraction from being productive. Now it appears to be the other way around. Productivity is merely a side effect of not having access to social media or our phones.

I’m glad we see chores, basically getting the bare minimum of cleanliness and organization out the way, as worthy of the “productive” label, though. At least we’ll still have satisfaction in ourselves and our outputs when the robots take our jobs.