React: Why Public Transport is a Treasure Trove of Tweet Inspiration

Brandwatch analyzes tweets coming from public transport passengers, finding that if you're looking for tweet inspiration you should just jump on a bus.

The boundaries of ‘proper behaviour’ and the unspoken guidelines for social situations are among those I find most perplexing.

Humans are weird, but I’ve found that the most unusual snippets into the true human self tend to surface when we collect a cluster of humans together and place them in an uncomfortably stuffy environment.

Public transport is a funny world within a funny world in which the consistent caveats of behaviour that dominate our relationships, work and home life go totally out of the window.

This discounted and environmentally friendly form of travel provides a rich sensory experience with an abundance of characters to encounter and emotions to experience. In short, it provides excellent material for a Twitter rant.

Suddenly, a daily commute can turn into an epicentre of social media activity, and our research incorporates 65,000 mentions from a one month period of people talking about what happens on their journeys. 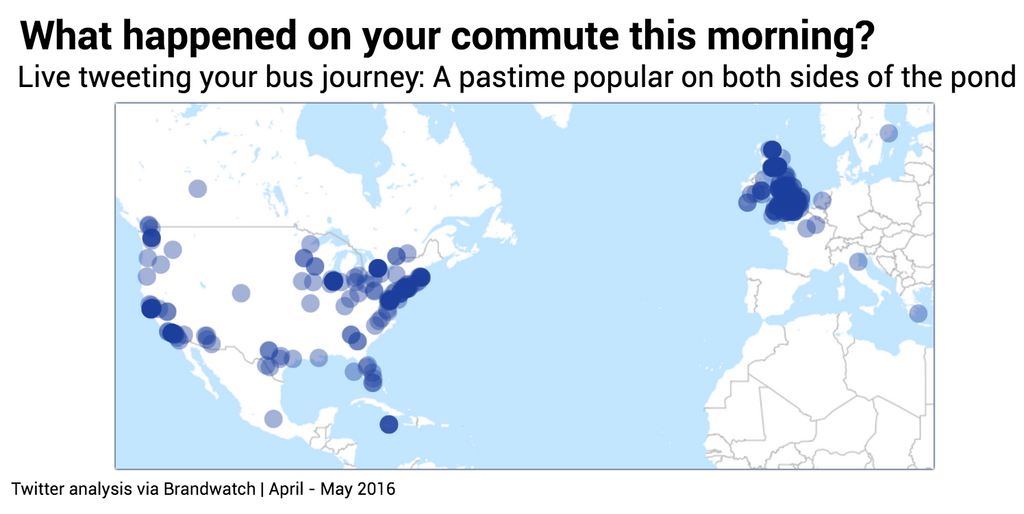 Geo-tagged tweets show that strong patterns of tweeting on trains, buses and subways are a universal occurrence for American and British tweeters. Click here for UK only data

One of those patterns is the streak of mischief and spite that public transport can bring out in people.

“On the subway today…”

Upon taking your seat on a bus, you enter a realm unlike any other. Being on public transport involves a dangerous concoction of being alone whilst simultaneously being observed.

It might seem like everyone else is looking out the window, but you are being watched. And probably live streamed.

Some lady on the train is clipping her nails and not even picking up her cut nails ?

It would be fair to say that we are at our most judgmental during our commutes, as the data shows that even seemingly innocent acts such as eating or reading appear more frequently than more unhygienic public transport activities like coughing and sneezing.

Try to avoid choosing the wrong clothes or smelling bad if you want to escape being blasted on Twitter.

It is unsurprising that, aside from humans doing fairly normal things like eating and wearing clothes, we also come across a huge amount of befuddling behaviour making an appearance on subway carriages and alike.

I bet you can’t count on hands and feet the amount of times you’ve heard stories starting with ‘on the bus today’ – be they confusing, brave or downright ridiculous.

This guy on the bus has a Python in his coat …. WTFFF ?

An old man sitting next to me on the subway literally just blew snot onto my leg, which is more or less an apt summary of my week.

On public transport the regular becomes irregular to the point that the simplest of things like eating or breathing become totally unacceptable.

Man sitting next to me on the train has crutches, a newspaper, a coffee and two bags. One personal item per person, pal. #LIRR #commuterlife

Riding on public transport is none of our favourite pastimes. The most confusing social parameters combined with a heightened right to judge is a recipe for disaster – but it doesn’t half provide some cracking content.

Seen a guy on the bus give up his seat for a girl, she didnt say thank you or even acknowledge dude. He made her get up & took his seat back

Guy sat next to me on the bus. He smelled like vodka and farts. When he stood up, I saw he’d shat himself. #FML

So why not throw caution to the wind with these rules? Put your stinky feet up on the chair or start an argument with a stranger – because in this odd place called public transport, you’ll probably end up on Twitter anyway.

The bald guy sitting next to me on the bus smells like hair care products. Life never ceases to be a mystery.

You’re safest on the bus

Interestingly, mentions of the subway within our research showed that they were nearly as high as train mentions despite often weaker internet signal. The tube, Britain’s version of the subway, had the lowest number of tweets, while buses also had a fairly low number compared to subways and trains.

Talking about Britain, we also looked at 8000 mentions worth of UK only data, in particular to see what their famous tube system looks like when people are complaining about their fellow passengers.

It turns out their tastes fit in with our overall data, only eating and a poor choice of clothes seems like a far bigger deal than other deviant behaviour on public transport. If we look at the overall data from tubes, buses and trains in the UK, it’s eating and smelling that people are most chatty about on Twitter. We also took a look at tweeting patterns throughout the day finding that UK based tweeters are most likely to complain about their fellow passengers during peak travel times. It’s not all bad

You’ll find some real characters on public transport, from the weird to the wonderful. To the unsung heroes making those tough commutes just a little bit brighter, we’re really glad you exist.

There’s a lady on the train who is drawing in charcoal for passengers. It’s really, rather awesome. pic.twitter.com/OFHMqYXHh5

Faith in humanity: Man on the subway takes the shirt off his back to give freezing homeless man something to wear. pic.twitter.com/cBa0yJuuf2