The Brandwatch React team have identified the most influential Republicans on Twitter. Find out which Republicans topped the list.

The fight for the White House has been a vicious one so far, and there are few places the battle has been played more emotively than on social media.

From Trump’s brash manner to Clinton’s sassier approach, the pair have pulled no punches online and have continually interrupted each other on Twitter.

Candidate chatter aside, one of the most dramatic parts of this election has been in-fighting within parties. The Democratic convention saw widespread protest as disillusioned Sanders supporters caused disruption. Meanwhile, the Republican party has been split by divisive candidate Donald Trump with several high profile Republicans condemning his campaign.

With cracks appearing in both parties, the Brandwatch React team decided to take a look at the most influential people within political conversations online, focusing this week on the Republicans, finding that there’s a wide breadth of opinion making big waves in the Twitter debate.

Hillary Clinton is a ____: The Internet Speaks

The Brandwatch React team used Audiences to search for Twitter handles that self-identified as Republican or conservative who had tweeted election-related terms in the last three months. For example, an account that included “tcot” or “GOP” in their bio who had tweeted the word “election” recently would be included in the wider list. We did not search for terms relating to individual candidates so the list is not disproportionately made up of Trump supporters.

Based on these accounts’ interactions with others (the more influential the better), they were each assigned an influence score. In this article, we’ll list the top 20 most influential Republicans on Twitter.

Follower counts and account names were correct at the time of writing.

The interesting thing about this list is that it’s not necessarily the political heavyweights that are topping the charts. By looking at non-candidate specific mentions in bios and tweets and simply looking for allegiance to the GOP or conservatism, we found a number of really influential characters who might not all be mainstream media icons but are influential in online circles instead.

The top five accounts we found give a good idea of the breadth of different accounts in our dataset – an organization, a politician, a media professional, a Trump supporter and a Trump hater.

@AppSame is a “Conservative Political Marketing Firm helping to bring America back to its greatness” and boasts 1.11m followers.

Everyone of you are Hero's @DallasPD
God Bless All of You pic.twitter.com/N70eujrXjq

The account is deeply involved in political conversations as a brief scroll down their timeline will demonstrate.

She tweets stories of patriotism and inspiration as well as news articles relating to the Presidential race.

Hillary Campaign Gives an Answer for Her Coughing Attacks and 'Medical Episode': She Has Pneumonia https://t.co/lKDZXE15Pu

Dude! Chuck tweets about cars and religious messages. He’s also not a fan of Trump.

I’ve been a Conservative since I was born, A Conservative I’ll be til the day I die. pic.twitter.com/rJ6fT5mZh0

As senior editor of the Conservative Review, Malkin is an expected addition to the list. She generates some serious engagement with her tweets.

Flashback: Hillary spreading her pneumonia germs to a little girl & lying to press about her health. #GetAwayFromHer https://t.co/cy6Y7aVeov

@ChristiChat has an impressive number of followers and is a big supporter of #TrumpPence2016. Her poetry is impeccable.

You can call us a name
But you can't stop won't stop!
supporters of #TrumpTrain

Carly Fiorina is listed in the top ten as well as the official GOP account. The fact that they’re listed alongside much less widely known individuals gives a sense of the power of lesser-known personalities on Twitter to make a splash in the political conversation. 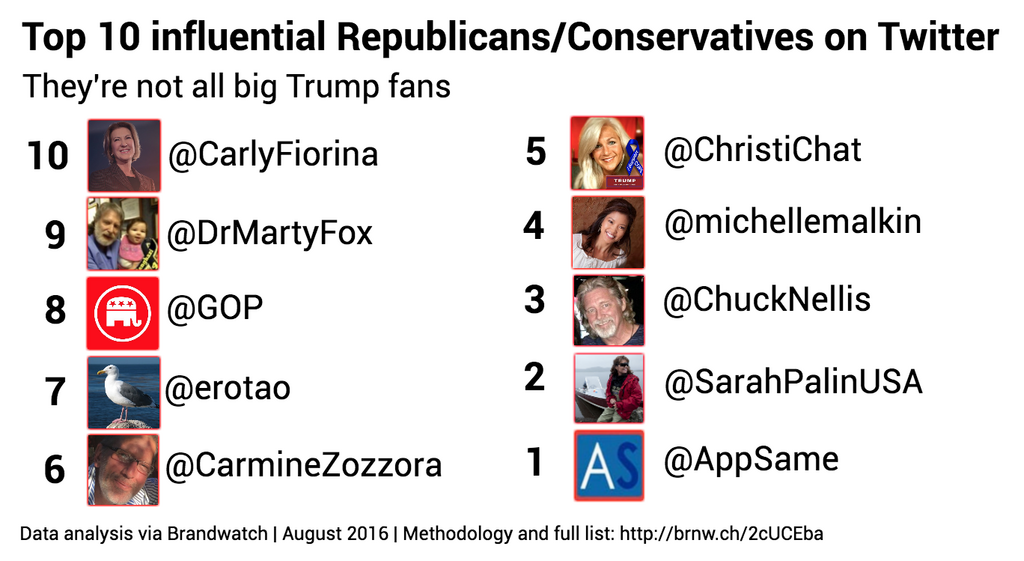 You’ll notice how close together influence scores are; there’s really not much between many of the accounts.

In the world of Twitter, it’s possible for anyone to have an influence over the political debate of the day.