@RealDonaldTrump vs. @POTUS: The Curious Habits of The Tweeting President

The Brandwatch React team examined the data surrounding @RealDonaldTrump vs. @POTUS to see how Trump uses his Twitter accounts differently.

It’s not uncommon for social media users to use their accounts in subtly different ways.

My LinkedIn’s for work stuff. My Facebook’s for embarrassing college pictures. My Twitter’s a sometimes awkward mix of the two.

But having two separate accounts on the same network can be more of a challenge. Kind of like having a public facing Facebook account your mum and dad can see and one that’s for your debaucherous party activity. It’s easy to get them mixed up when posting.

I’m guessing this is part of President Donald Trump’s daily struggle. With two Twitter accounts (@realdonaldtrump and @POTUS), it must be difficult to decide what’s going to go on each.

There’s a lot of crossover in the topics covered, but they seem to have different purposes. @POTUS is generally a bit more vanilla.

The double Twitter identity intrigued the Brandwatch React team. It’s something we’ve examined before but now we’ve got months of data to play with.

How has President Trump been using his Twitter accounts?

You might have expected that Trump would give up on his old @realdonaldtrump account in favor of tweeting to the people through @POTUS.

That’s definitely not the case.

In fact, he’s more likely to be tweeting from @realdonaldtrump than @POTUS most of the time. 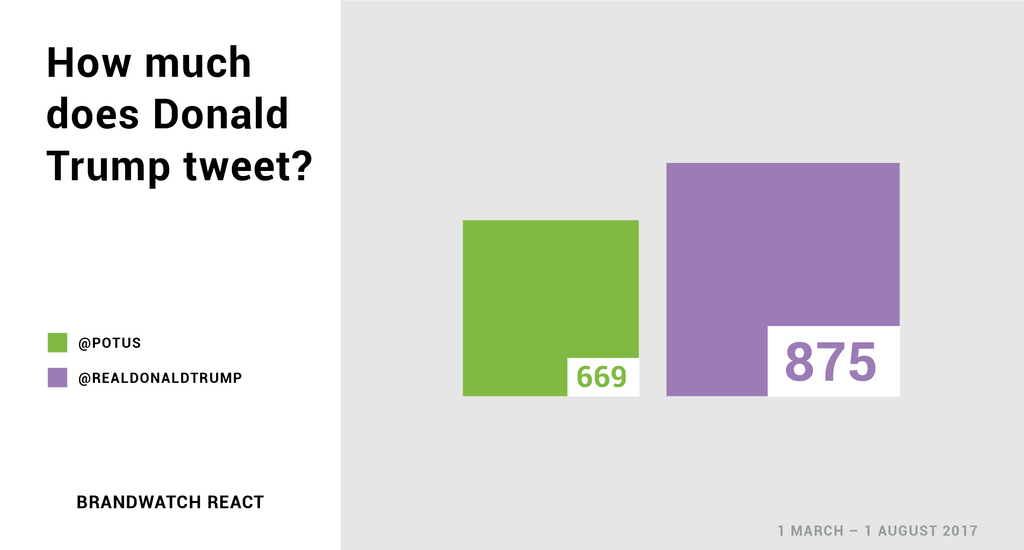 Misplaced Bets: “If Donald Trump Becomes President I Will _____” 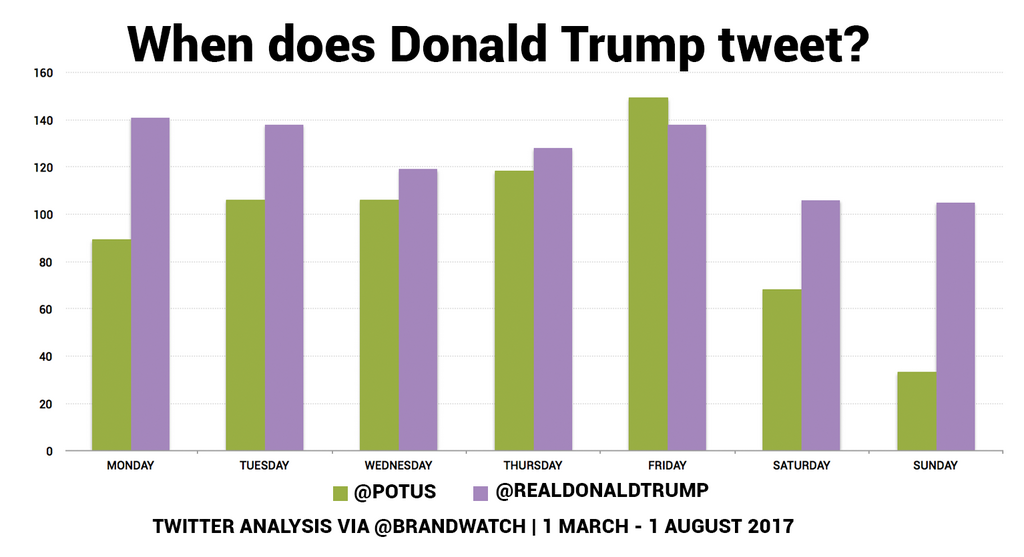 Looking at the time of the day presents stranger differences.

@realdonaldtrump is way more likely to tweet in the early hours of the day (6 – 9am, generally). Meanwhile, @POTUS tweets peak during the working day (11-5pm). Perhaps this explains why the tone of @realdonaldtrump tweets can be a little more…interesting? 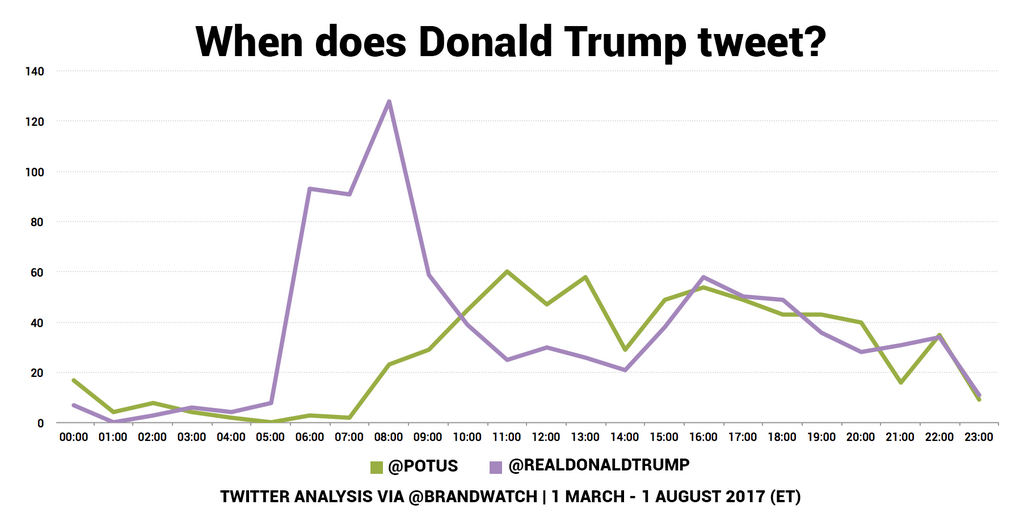 It’s perhaps comforting to note that Trump uses his work account in working hours, although that hasn’t stopped a number of late night tweets from the Presidential account.

How much is the President emphasizing his tweets with an exclamation point? 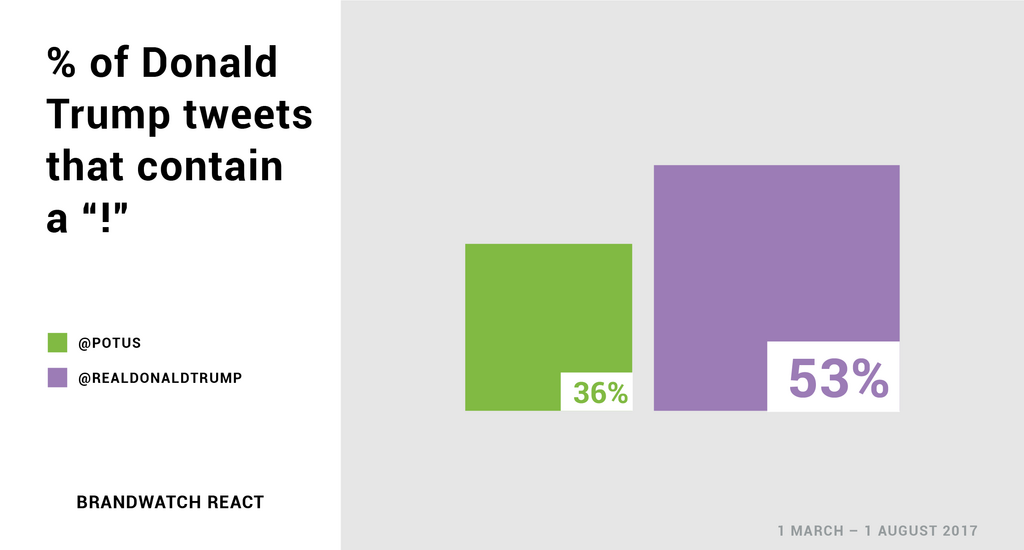 In fact, these numbers are surprisingly similar to a smaller scale study we did earlier this year (looking at around 10 days of Trump tweets).

Whatever life has thrown at Donald Trump, his use of the exclamation point has remained steady, it seems.

@Realdonaldtrump has significantly more followers than @POTUS (35 million compared to 19.7 million at the time of writing), so maybe a few retweets going the other way would spread Trump’s messages more effectively.

The official and the personal

The scope of each Twitter account feels a little unclear of late. Let’s assume that @POTUS is meant for “official business” while @realdonaldtrump is Trump’s personal outlet.

It kind of makes sense when it comes to things like his Weekly Address, that is regularly promoted using @POTUS. Meanwhile, the famous “covfefe” incident and Trump’s light hearted comment surrounding it occurred on @realdonaldtrump.

Who can figure out the true meaning of "covfefe" ??? Enjoy!

There’s certainly a blurring of the line between personal and official, however.

For example, Trump’s announcement on disallowing transgender soldiers to serve in the military came from @realdonaldtrump and the issue hasn’t had any discussion on @POTUS.

….Transgender individuals to serve in any capacity in the U.S. Military. Our military must be focused on decisive and overwhelming…..

Where should one go for Trump’s official line on key topics?

Well, it seems following both is a good idea.

Are you a journalist looking to cover our data? Email us at [email protected] with any requests or questions.