React: Sanders Comes Out on Top in First Head to Head #DemDebate

Hillary Clinton and Bernie Sanders squared off on Thursday night in the fifth Democratic debate.

It wasn’t the first time the presidential hopefuls went head to head this week as they met on Monday at the Iowa Caucus.

Monday’s vote resulted in a near tie with Clinton edging ahead, marginally. That night O’Malley suspended his campaign, so then there were two.

The debate was sanctioned mere days before the actual event which meant the moderators and candidates had to scramble to prepare. Predictably, a heated debate ensued.

The moderators’ opened the debate by highlighting that this debate was not about talking points but about the difference between the candidates on these points.

The debate opened with a heated debate on healthcare and education.

The differences between the candidates certainly became appartment during this exchange; one advocating fee free across the board while the other was adamant that it was not a realistic proposal. This led onto a heated debate on political contributions that focused on the candidates’ opposing views on the subject, including Clinton’s accusation of an “artful smear” on behalf of the Sanders campaign. This topic amassed over 4,000 tweets in relation to the candidates.

Albeit, this was shadowed in comparison to what was the topic of the night – foreign policy. 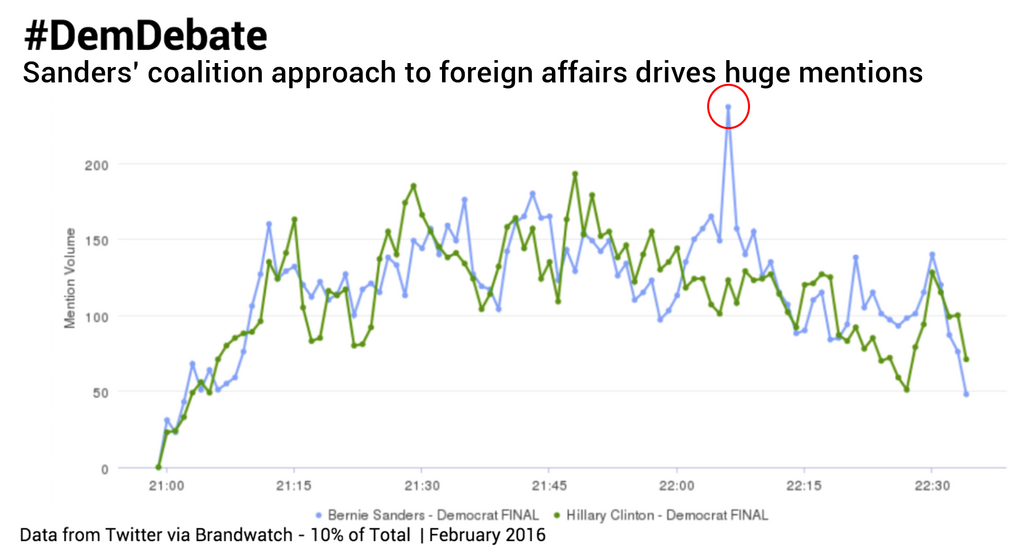 The discussion on foreign affairs accumulated over 14,000 mentions on Twitter during the debate, and is also responsible for the biggest spike in mentions of the night.

This came when Sanders was asked specifically about what his foreign policy strategy would be as President – “The United States cannot do it alone. We cannot be the policemen of the world.” Interestingly, even though the topic of marijuana was not introduced on stage it contributed to 17% of the overall conversation on social.

One of the most heated moments of the night came when the discussion unfolded on whether or not Clinton could be labeled as a ‘progressive’ candidate.

The former Secretary of State denied Sanders’ claims that she resided on the establishment end of the spectrum and used her position as woman, and the only woman in history to win the Iowa caucus, to drive this point home.

#DemDebate: As it stands @BernieSanders (48%) is getting more support from the female audience than @HillaryClintonpic.twitter.com/0soUq5Q4g0

This is somewhat ironic as Bernie Sanders could boast a stronger female support on social during the course of the debate.

We also took a look at the hashtags used most frequently for these candidates.

Hashtags play no role in forecasting the results of a debate, or race, but it is interesting to note that #FeelTheBern was by far the most popular on social during the deliberations.

Both politicians performed well during the debate despite their opposing views on many grounds. That being said, Sanders inched ahead and ended with a positive sentiment score of 66%.

There was a feeling of mutual respect as the debate drew to a close, with both candidates commending each other and respecting each other’s view.

Although, one of the moments of the night definitely went to Bernie Sanders when he declared that “On any given day we are 100% better than any Republican candidate”.

If you have debate fever then never fear because the Republicans will take the stage on Saturday in what will be the final debate before the New Hampshire Primary.

In the meantime, track your favorite candidates’ progress with our live data viz.