A Fortnight with the 45th: Social Media Reacts to President Trump

Donald Trump has been the 45th president for just over two weeks, and he's been busy. We've looked at how social media reacts to Trump across the world

Donald Trump has been the 45th president of the United States for just over two weeks. For our staff, it feels like much, much longer.

We haven’t stopped covering Trump since he first announced his candidacy. Now, after an eventful two weeks worth of news, it’s clear our analysts aren’t getting a break anytime soon.

We decided to check out how social media reacts to Trump – using Brandwatch, we analyzed the conversations surrounding all of the administration’s decisions so far, including declarations, memoranda, executive orders, appointments, nominees, and bills.

We also looked at how the rest of the world is reacting to Trump and what his old supporters are feeling now.

Alright, let’s jump into the facts.

The many, many decisions

We looked at a 25% sample of the conversations and news about all the executive orders and declarations made at the time of writing.

With the speed of change occurring in Washington since the inauguration, conversations tended to shift in focus as more news came in. For instance, conversations about Trump’s advancements of pipeline constructions have become less popular with time.

Of note, one of Trump’s decisions has had some staying power. Even after more than a week since it’s creation, Trump’s executive order regarding the temporary halting of refugees and immigrants from select countries is still the most popular decision discussed online.

Social media reacts to Trump around the world

With each new action coming out of Washington, the global implications of these decisions continue to grow.

According to millions of data points across the web, no continent but Antartica is staying silent about these decisions.

The United Kingdom, Canada, Australia, and India are among the most vocal countries involved in the conversations.

Unsurprisingly, individuals outside of the US most discussed the executive orders about immigration and the advancement of the wall on the southern US border.

Both executive orders have great international consequences, and thus sparked thousands of conversations from other countries. 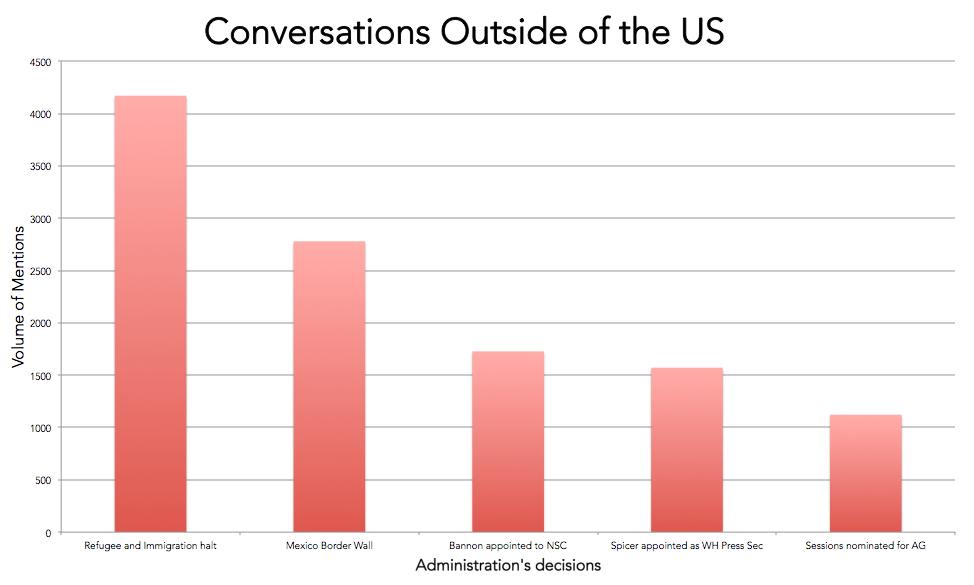 The voice of his voters

Over 60 million US citizens voted for Donald Trump. How are these people feeling now?

We built a Query to listen to self-declared Trump-voters reaching out to the President’s official social media pages.

Interestingly, the topic analysis below shows that among Trump’s 60 million voters, there are currently a lot of mixed feelings. 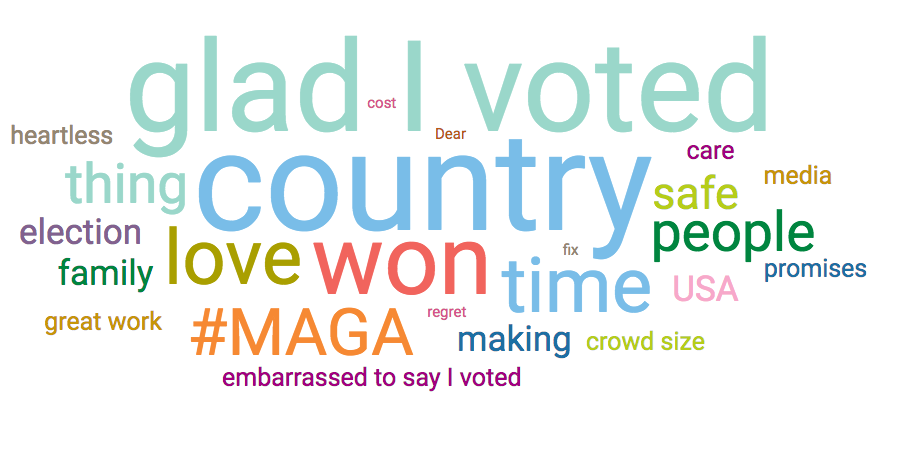 Most of these topics fall into two pools of post-inauguration reactions: those who were glad they voted for Trump, and those who regretted it. Evidently, two of the biggest topics from voters are “glad I voted” and “embarrassed to say I voted”.

Some reactions included pleas for him to stop focusing on the “crowd size” of his inauguration. Additionally, others praised him for keeping Americans “safe”.

Many more fortnights to come

We’re not even close to done with our Trump data.

Follow coverage of the Trump conversation here, and look out for more research these next four years.

Are you a journalist looking to cover our data? We have plenty more. Email us at [email protected] for more information.