It’s an opportunity for Apple fans (and haters) to find out what’s next from the tech giant and what products are likely to be added to birthday present lists this year.

This #AppleEvent was no different. The hashtag garnered over 120k mentions yesterday and saw mention spikes of well over 1k per minute during the event itself. 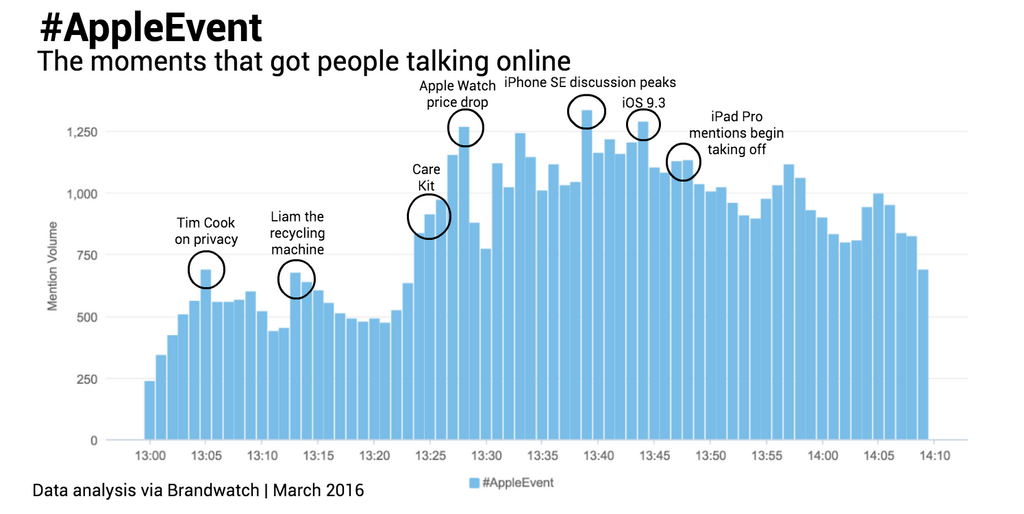 While Tim Cook took to the stage we monitored the conversation, and this is what we found.

The likes and dislikes

A great way to see how social media is reacting is to take a look at sentiment score.

Luckily for Apple, this stayed above 0 throughout the event, suggesting that those tweeting positively about the event massively outweighed those who didn’t like what they saw.

Looking at the key moments during an event and how sentiment-categorized mentions correspond, as well as looking at the key topics within the mentions, we can get some idea of how successfully features and products are going down online. 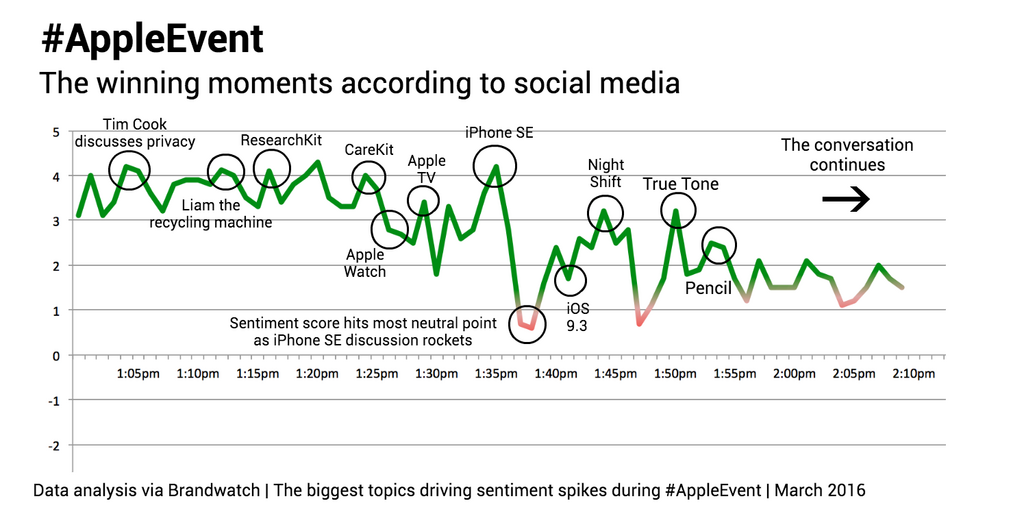 The most mentioned point of the event was at 1:39, as social media discussed the iPhone SE announcement.

This was also the most neutral point in terms of sentiment throughout the duration, as the pros and cons were discussed.

Meanwhile, ResearchKit definitely drove the highest concentration of positive sentiment in a minute, with significant spikes where it was the largest discussed topic at 1:17 and 1:21.

What will fly off the shelves?

The iPhone SE clearly made its mark on social.

Mentions of the 4 inch phone alongside #AppleEvent hit 20,085 on the day and drove the bigger mention spikes during the announcement than any other product. 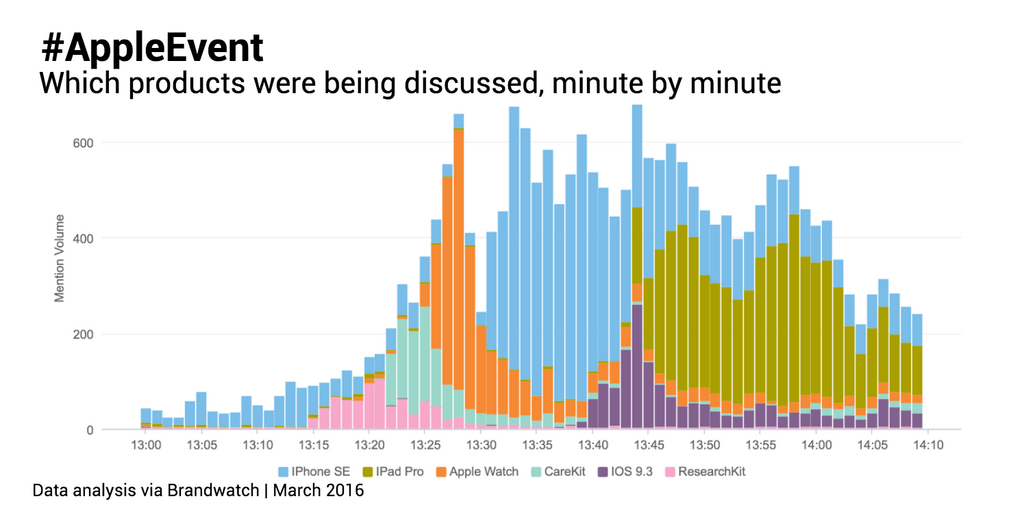 We took a look at the most emotive responses to the different products talked about during #AppleEvent by removing neutral posts and looking at sentiment-categorized mentions only.

Here’s what we found. 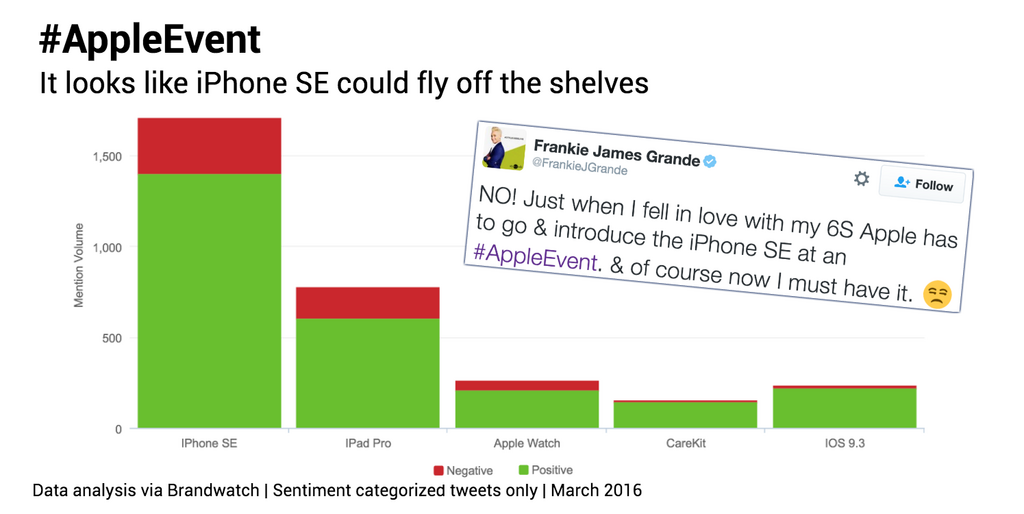 Of all the products bought up, the iPad Pro got the worst negative/positive mention ratio and only half the reaction the iPhone SE received with just over 10k tweets.

This might be surprising given how much time was dedicated to the product during the event.

The iPhone SE announcement was the big winner of the day.

iPhone SE could be a hit with the ladies

Male authors made up 70% of the gender categorized #AppleEvent conversation so we can’t draw strict conclusions about which products appealed more to which gender.

However, taking a look at the numbers, the iPhone SE was the most talked about product by female authors while males were most chatty about the iPad Pro. 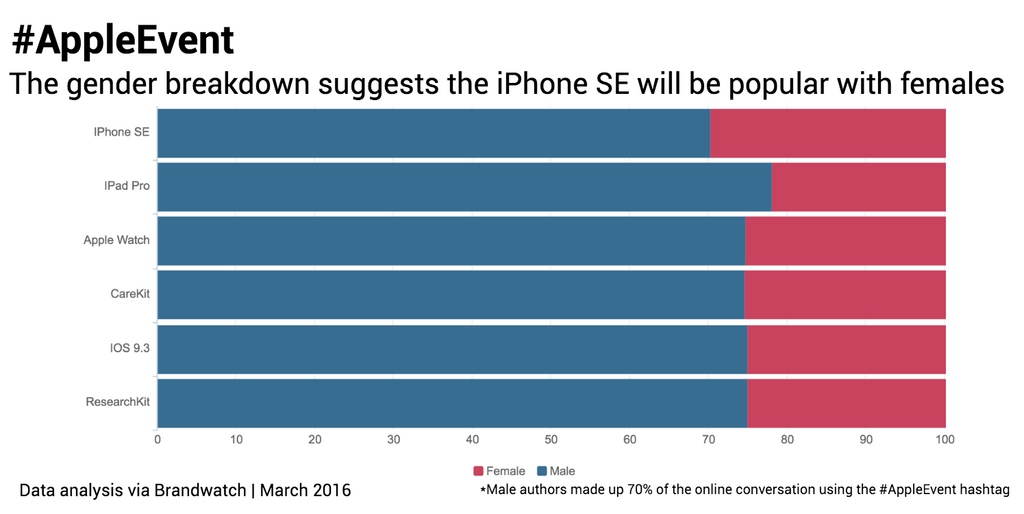 What did you think of this #AppleEvent? Let us know @BW_React