React: Social’s Take on The Golden Globes in Four Charts

Marking the beginning of the awards season, the Globes have always been hailed as the ‘award show to watch’.

This year, all eyes were on the nominees, celebrities and outspoken host, Ricky Gervais.

Red carpet coverage got the online audience warmed up as tweeters channeled their inner fashion police – the couch edition.

Jennifer Lawrence wowed, with The Joy actress being referenced in almost 1,000 of the 10,000 red carpet mentions.

Having previously hosted three Golden Globes ceremonies, the pressure was on for Ricky Gervais to perform.

He certainly made an impact in his opening monologue, a controversial celebrity target practice that didn’t go down well with everybody.

Nobody was safe, from remarks on Caitlyn Jenner to Sean Penn, this speech was not for the easily offended.

Here are the uncomfortable jokes Ricky Gervais made in his Golden Globes opening monologue https://t.co/WTjRdiMeRt

We don’t know if it was the slightly out-dated jokes or the fact he is a hosting veteran, but something worked for Gervais.

At the close of the show his online positive sentiment stood at an impressive 78%.

#GoldenGlobes: Despite all the jokes, Ricky Gervais seems to be pleasing the online audience pic.twitter.com/kinLZnNpd1

The big winner from the night was The Revenant. Leonardo DiCaprio’s latest movie was nominated for, and won, two categories.

DiCaprio’s win of Best Performance by an Actor in a Motion Picture was well deserved, especially seeing as the actor slept overnight in a bear’s carcass.

More importantly though, could there be an Oscar on the horizon for Leo?

Following his win, the word “Oscar” together with “Leonardo DiCaprio” produced over 7k mentions in the Golden Globes chatter.

The ‘Best Comedy/Musical’ category came under fire when the Martian claimed the globe, pipping to the post both Trainwreck and Spy – a perfect example of the sometimes controversial decisions of the HFPA.

#GoldenGlobes: There were some unhappy tweeters following the Martian’s win in the best comedy category pic.twitter.com/0wOlcUZMLR

Lady Gaga had not only the honor of winning the award for Best Actress in a Miniseries, but also gets the red ribbon for driving social conversation.

The singer-turned-actress humbly accepted her award (after clearing her path to the stage) and created a 12k peak in mentions in the process. 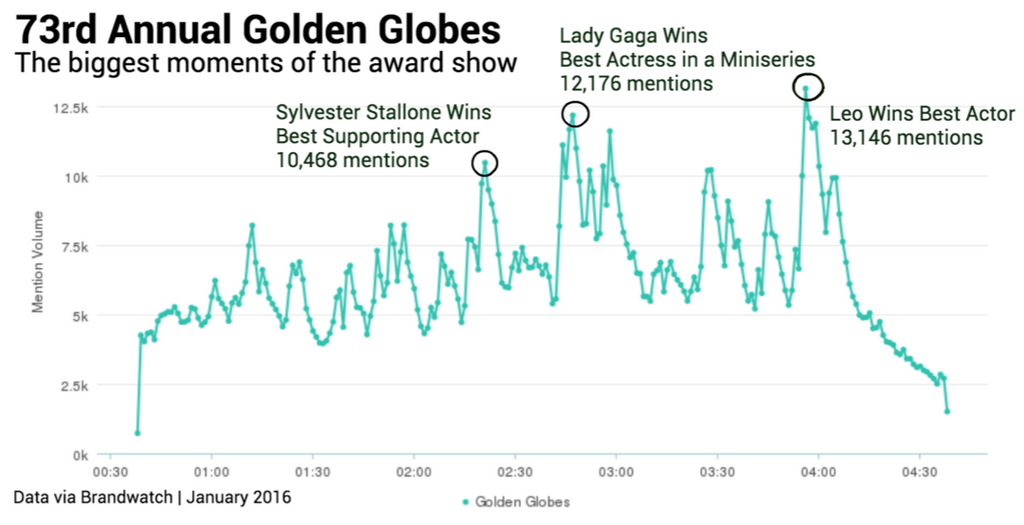 You can find a full list of the nominees and winners here.

Arguably, the best and worst moments of the night came from this year’s presenters, who each tried to out-do each other in the funny stakes.

Jamie Foxx set the bar high with a well timed Steve Harvey impression, receiving 1,239 mentions in one minute. It’s the joke that keeps on giving. 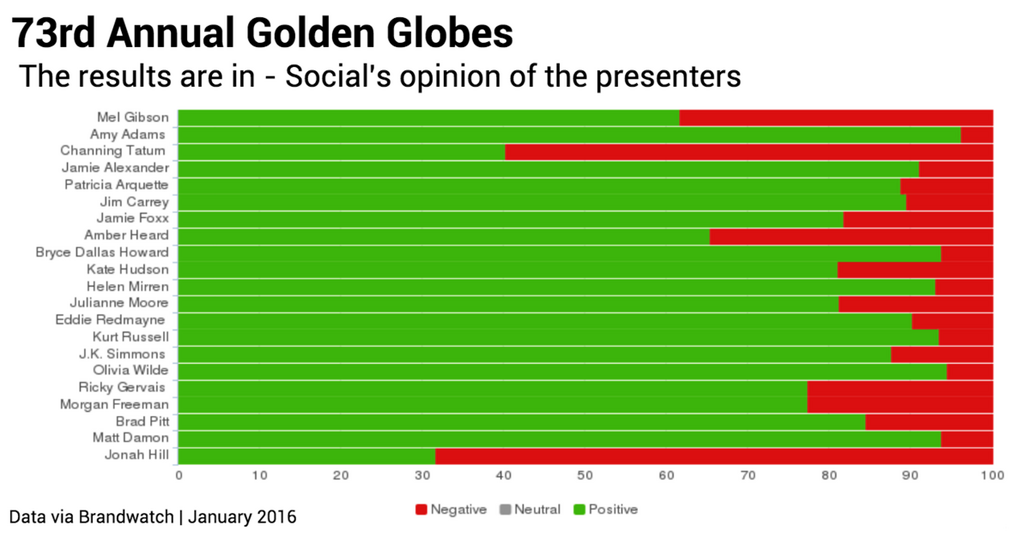 On the other end of the scale, Channing Tatum and Jonah Hill failed to impress with their appearance on stage.

While most people were shocked and appalled with the current state of Channing Tatum’s hair, the duo were dubbed “the worst” and “disappointing”. Probably a performance to forget.