The Brandwatch React team analyzes the hype surrounding the desperately awaited return of the Pumpkin Spice Latte this Fall.

It’s like Christmas has come early, though that’s a whole other story.

The return of the Pumpkin Spice Latte to Starbucks is being celebrated on social media in a big way.

The announcement was made on 1 September and it saw a spike in tweets talking about Starbucks alongside “pumpkin” or “PSL” or mentioning @therealPSL of over 15k. 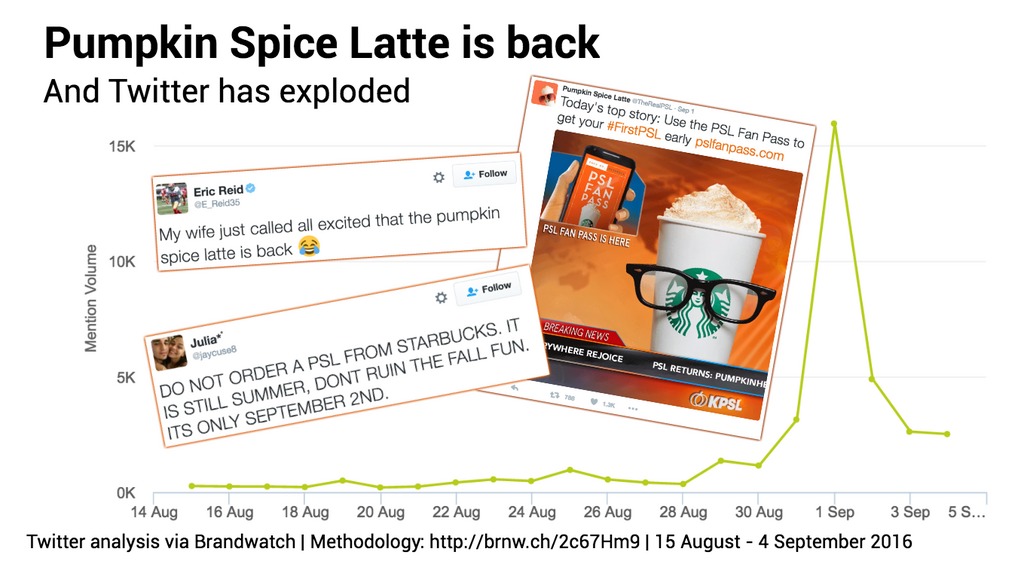 Overall between 15 August and 4 September we found 37,233 mentions of the hotly anticipated beverage.

We should note that the pumpkin spice flavor is available in multiple establishments but we focused solely on Starbucks for this post. The beverage has now been served by Starbucks for 13 years, with the coffee giant reportedly selling 200 million cups of that drink alone.

With such an enormous amount of conversation surrounding #PSL, the Brandwatch React team took a dive into the data to see what delicious insights could be found.

While many are more than willing for their tastebuds to be reunited with the flavors of fall, others are questioning the timing.

There’s been quite a backlash.

It says something about the power of Starbucks that people claim the addition of a pumpkin flavored beverage to the menu is enough to summon the beginning of a new season.

I don’t care what the calendar says , pumpkin spice latte is out at Starbucks which means it’s fall people?????

Regardless of your view on when fall starts, Starbucks says it starts now, and that the Pumpkin Spice Latte will become “part of your autumn routine.”

There’s definitely a bit of a stereotype surrounding Pumpkin Spice Latte fans and it jumped out in the data.

Not only was “white girls” one of the top mentioned phrases surrounding the hot beverage, the majority of tweeters talking about the announcement were female. 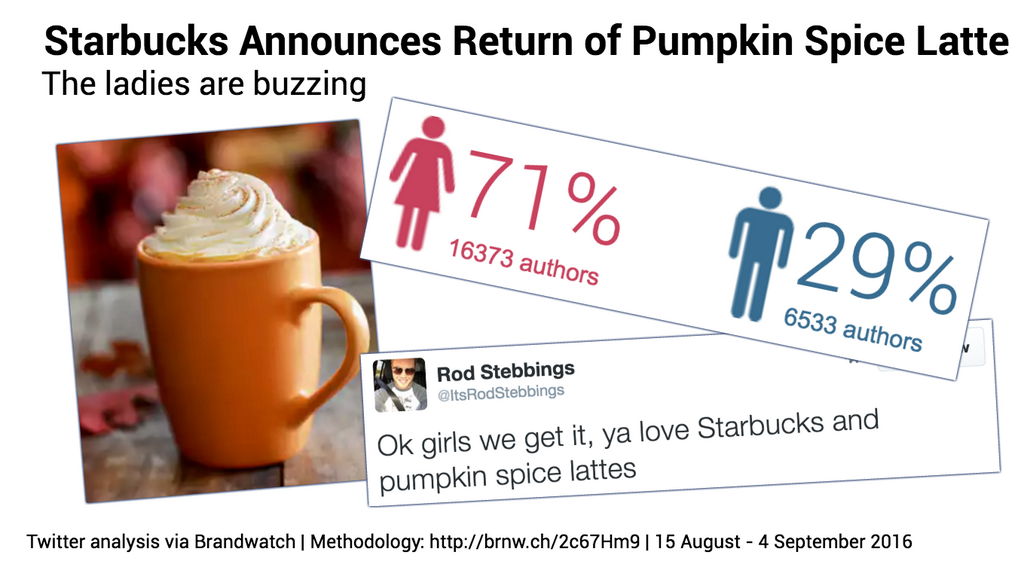 The balance isn’t as tilted towards female authors as many people make out, though.

How most girls will act now that #PumpkinSpice has begun. #PSL #Starbucks #HereWeGo #PumpkinSpiceIsntThatGreat pic.twitter.com/oDbIBne1YB

Zooming in on the USA for some location data, it was the people of LA that generated the most discussion surrounding the drink while Chicago was the city talking about it second most.

Our geo-tagged mentions map can give you an idea of how many people are keen to get themselves down to Starbucks. 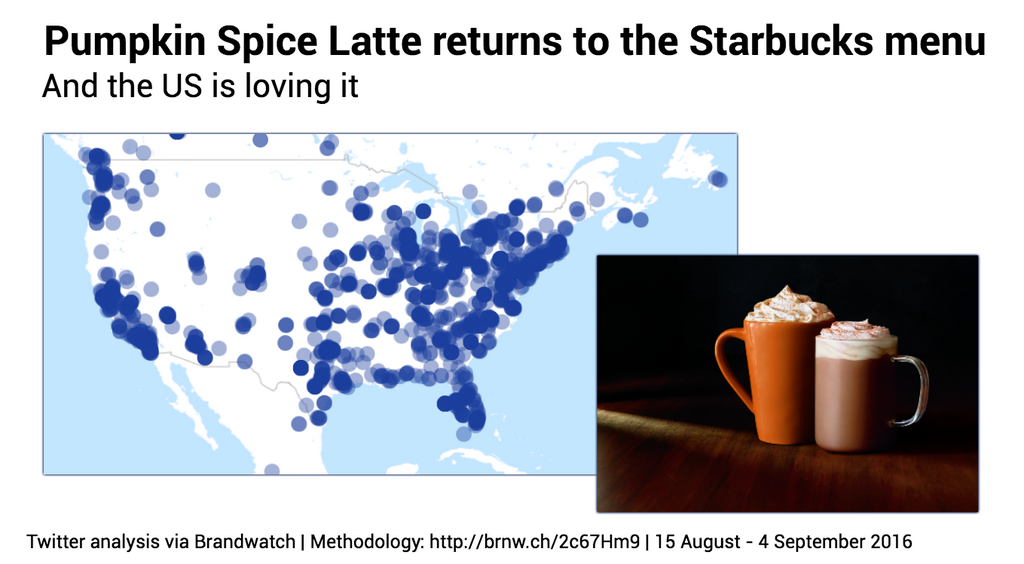 Starbucks is a hugely powerful brand capable of infiltrating our very dreams, so it’s not really a surprise that they are able to generate the epic amount of hype surrounding what is essentially a tasty but not exactly history-changing hot drink.

The quirky Twitter account for the #PSL has an impressive 113k followers (and will likely gain a whole lot more in the coming weeks). It successfully stirred the hype pot a week before the official announcement having not tweeted since last year.

TheRealPSL also has a successful Instagram account that’s generating thousands of likes and comments. But it’s not just about their owned channels.

The PSL announcement has been discussed by @people, @TIME and @BusinessInsider to name an influential few and it trended on Twitter. Even if it does attract haters, the announcement of the Pumpkin Spiced Latte is a major event in the coffee calendar and journalists and tweeters are more than happy to spread the word.