React: The 15 Hottest Game Releases of This Summer

August is traditionally slow in the video gaming industry.

With the consumer-heavy holidays of Thanksgiving and Christmas far away, the hot summer months face a lack of gaming releases as people are busy making the most of the fine weather (hopefully) outside.

July brought the E3 convention, where announcements of games in early development dominated the headlines.

Back then Xbox took first place. In August, the Gamescom convention in Cologne drew thousands of attendees on a slightly less press-centric premise.

The majority of those games, though, won’t be released until the fall.

We’ve looked at 15 of the most popular games released this month, and analyzed 118,048 tweets, Facebook posts and blog comments about them.

Our research showed that the game with the biggest social media buzz was Madden NFL 16.

While it was only released on August 26, it still managed to receive 25,694 mentions.

This shouldn’t come as a surprise – when we analyzed the biggest social media gaming franchises of all time, Madden came very close to the top.

Selling more than 100 million copies worldwide, it’s one of the biggest franchises in gaming.

One of the only brands that can challenge the broad appeal of Madden is from a totally different space – movies.

Disney has been wiggling its way into the gaming space for over a decade. It has now found its place with the digital-toy-crossover platform Disney Infinity, which released its third installment on August 30th.

Like Madden, Disney Infinity 3.0 still received a lot of social buzz despite coming out late in the month, with 21,330 in total.

The addition of Star Wars and Marvel characters to the Disney interactive universe took up a lot of the conversation.

Falling further behind is Xbox’s mega-brand Gears of War, which received a re-release this week. The ‘Ultimate Edition’ received 13,521 mentions in total. 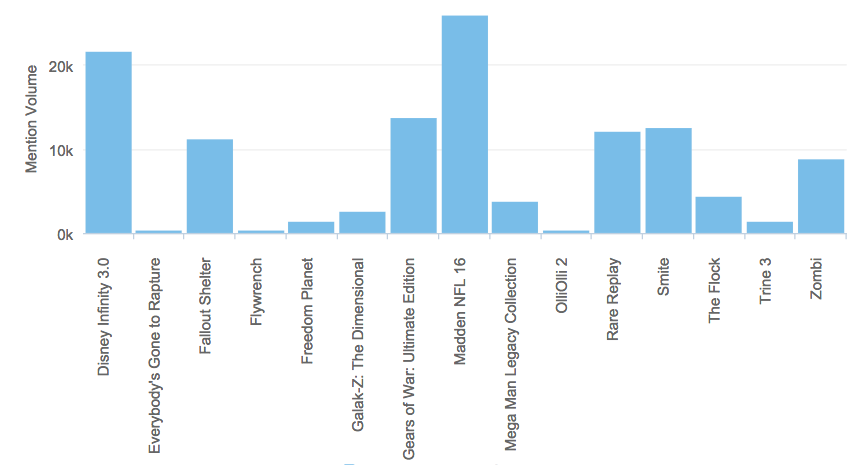 You’ll notice that every game on this list so far has been a re-release or an iterative update.

This is the nature of summer game releases, and less talked about games follow the same trend.

Smite, Rare Replay and Fallout Shelter took notable third, fourth and fifth places respectively. All of them are based on existed IPs or have been available – in some early form – for months.

Little talked about games from indie developers still have a place on our list.

If you’ve got an issue…

In addition to polling the most buzzworthy games, we’ve also analyzed them for sentiment.

We can draw real-time feedback from these tweets and Facebook posts to uncover real-time pain points that standard reviews don’t.

Fallout Shelter, an app for iOS and Android devices with a thriving online Reddit community behind it, has a larger proportion of negative mentions.

36.6% of the mentions about the vault-simulator were negative, and keywords that have emerged are ‘uninstall’ and ‘issue’.

The game currently has an ‘average or mixed’ Metacritic score.

With a negative sentiment of 48%, Mega Man Legacy Collection is the most hated game release of August 2015. We found mentions concering controller input lag, framerate issues and part of the early games’ charm being lost in the transition to modern consoles.

While August was a slow month, our research still presents some old truisms along with interesting discoveries.

More games are slated to release in September, not least Metal Gear Solid V on September 1, a series which polarizes thousands of gamers every time a new game is released.