The first Presidential debate will go down in history as a key evening in the 2016 US presidential election.

It was the first time the candidates met face-to-face to debate the important issues, and the first opportunity voters had to compare them side-by-side.

Both spoke passionately about their credentials for the job and their very different visions for America’s future, but what moments jumped out on social media?

The Brandwatch React team broke down around 6 million mentions of the debate to find out.

Hype grew for the debates throughout the day and both candidates posted teaser tweets ahead of the debate, sending mentions rocketing.

My team of deplorables will be managing my Twitter account for this evenings debate. Tune in!#DebateNight #TrumpPence16

The debate was so full of tweetable soundbites social media had to scramble to keep up and while the live audience was told to be quiet, no one was holding back on Twitter.

The React team tweeted some of the key quotes in the early stages, but then what seemed like a considerable mention spike in the early minutes was later an insignificant bump. At one moment in the debate Trump received over 30k mentions in a single minute.

#DebateNight: "I call it Trumped-up trickle down economics" was accompanied by a spike of 7k Clinton related tweets in a single minute: pic.twitter.com/NuENpX8bqY

Here are a few of the key moments that caught social’s attention during the debate. 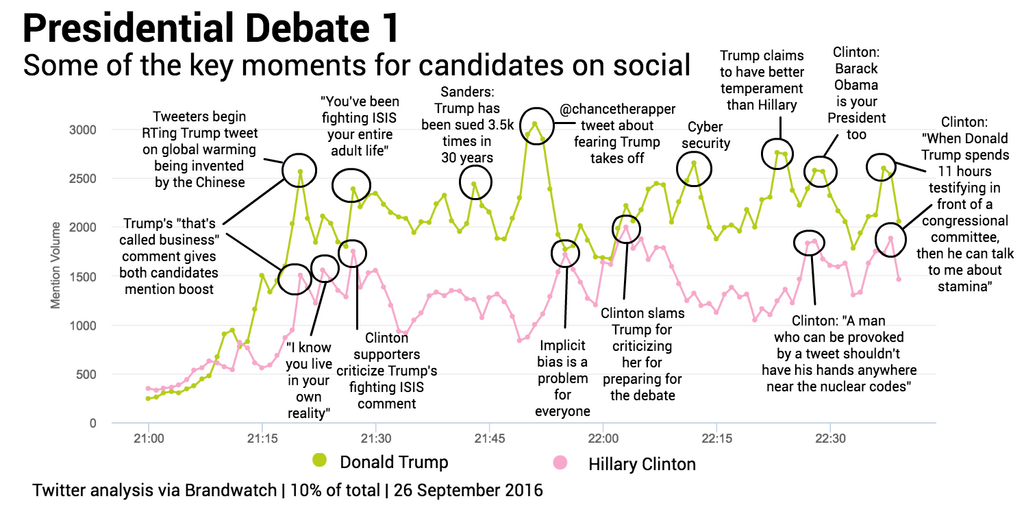 Clinton’s Twitter account did a good job of getting her in-debate quotes out there and retweeted, meaning fairly lengthy quotes made it into the top mentioned phrases.

"When Donald Trump spends 11 hours testifying in front of a congressional committee, he can talk to me about stamina." —Hillary #debatenight

This is the simple fact about @HillaryClinton: she is a typical politician – all talk, no action. #Debates2016

Examining the topics, we found taxes were an enormous part of the conversation and with Trump refusing to disclose his tax returns until Clinton revealed her alleged 30k deleted emails it was the subject of fiery exchanges on the stage. Foreign affairs was another hot topic debated intensely by the candidates and on social media.

Fact-checking was a huge part of the conversation, and pointing out errors in candidates’ statements was a central part of the debate on and off stage. The Clinton campaign stung Donald Trump by retweeting a tweet from 2012 that took off in the early moments, earning them 77k retweets.

"I never said that." —Donald Trump, who said that. #debatenight https://t.co/6T8qV2HCbL

Mentions wise, Trump made up around 60% of the Twitter candidate mentions. This isn’t unusual – he’s consistently generated more mentions than his opponents throughout the race. Looking at location made no difference – he received more mentions than Hillary in every single state. 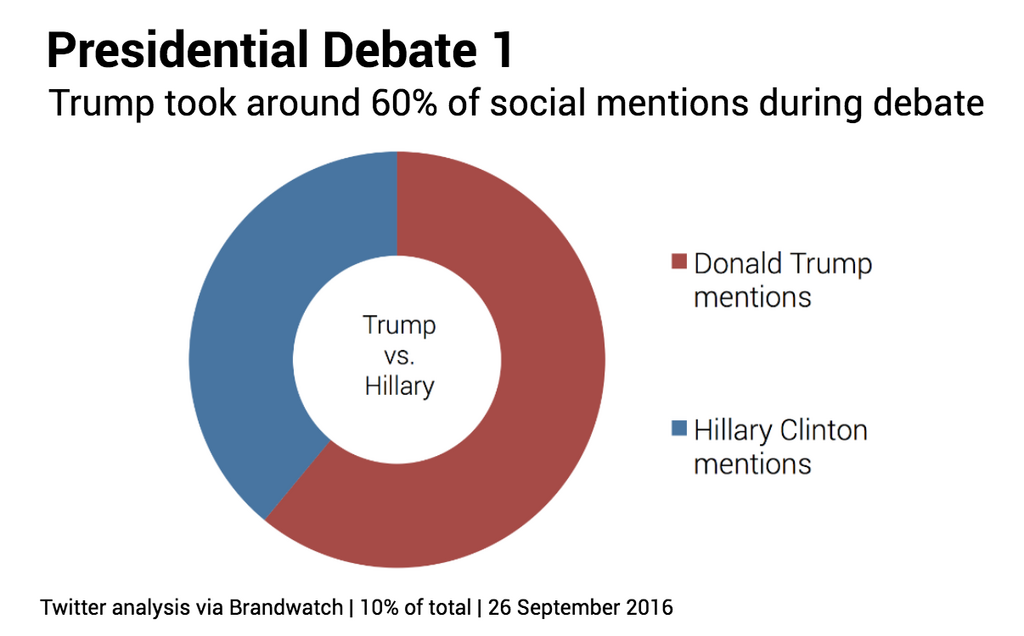 Both of their official Twitter accounts were at the top of the “most mentioned” list, and they both generated over 800,000,000 impressions each during the debate.

Breaking the candidate mentions down by gender, both candidates were being discussed by female authors at a higher rate than males with Clinton generating slightly more female mentions overall.

Volumes may have seen Trump generating the most tweets, but looking deeper at the mentions the story of the most successful candidate is different.

Breaking down mentions of each candidate categorized as positive or negative, it looks like Clinton clinched it. 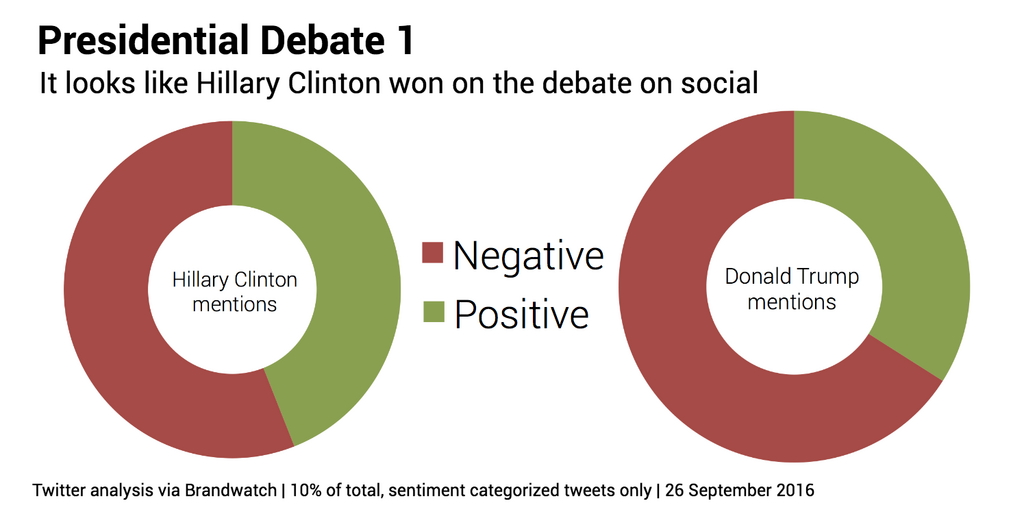