We've got all the data on #GBBO - including a hot tip on who's going to win.

Summer in Britain brings two certainties; endless conversations about the weather, and that Mary Berry will appear on TV wearing a Zara blazer that will immediately sell out.

That’s right – Great British Bake Off is back, bringing with it an onslaught of think-pieces about the usage of beetroot in cakes (is a beetroot gateau one hipster step too far?) and fury about the staple of the GBBO workbench, the KitchenAid, being replaced by the Kenwood KMix.

Of course, here in the Brandwatch offices we are keeping a close eye on all things Bake Off.

Combining our love of social data with baking, we have been using Brandwatch Analytics to scan the internet for all mentions of our TV favorite to see if we can find out a little bit more about how the public are talking about the show after just one episode.

Last night saw the show premiere with ‘Cake Week’ – and the internet went mad for it.

#GBBO: You’re typing at about 300 tweets per minute, in total. pic.twitter.com/lt94MoAUva

As we tweeted above, in the build up we were seeing around 300 tweets per minute.

During the show that rose to over 1,000 GBBO related tweets per minute. That’s a lot of insight waiting to be unlocked.

Which of the twelve homebakers are proving (see what we did there?) to be early favorites, and which are bombing like the gin and tonic cake that lacked enough gin for Mary Berry?

Which of our hosts are driving the most conversation on Twitter?

And what can we learn about us, watching along at home?

Well, no spoilers, but we don’t much like the addition of beetroot into a sponge.

A host of influencers sang her praises, including Fearne Cotton, who compared her hair to a ‘perfect meringue’.

Which contestants got the most attention?

If you were, like us, endlessly refreshing your Twitter timeline throughout the show, you’d have noticed that bearded baker Stu was receiving quite the share of conversation.

Here’s how the mentions played out, minute by minute:

In fact, Stu – who was the first cook to leave the show – has been talked about online almost twice the amount of the next most tweet-worthy contestant, Dorret.

The viewing public could absolutely not handle the addition of beetroot in Stu’s black forest gateau. 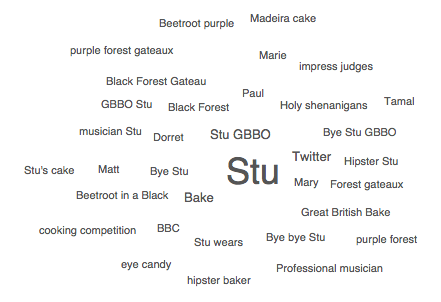 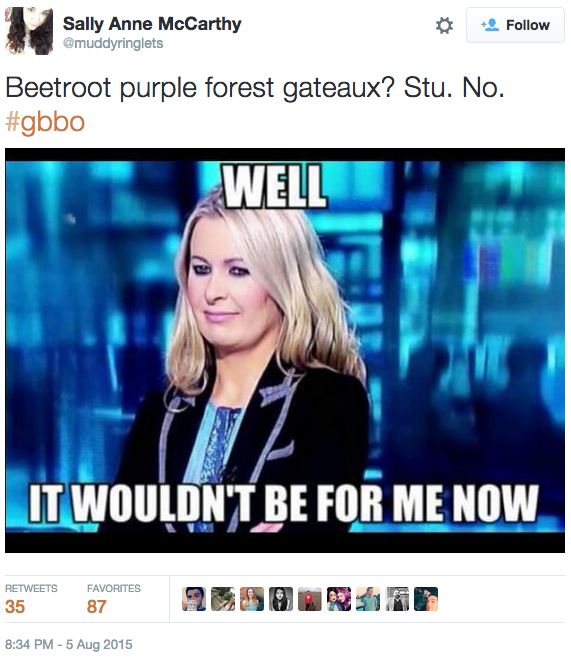 In fact, we’ve counted nearly 2,500 mentions of ‘beetroot’ in relation to GBBO.

Being so subversive in your first challenge is clearly not the way to go. Bakers, take note.

The great fear of any baker, not least one cooking in front of the cameras on GBBO, is the soggy bottom.

The Hollywood-ism was mentioned thousands of times throughout the show, and sadly, Dorret’s cake collapsed during the Black Forest challenge – leaving her the first contestant to be called out on it. 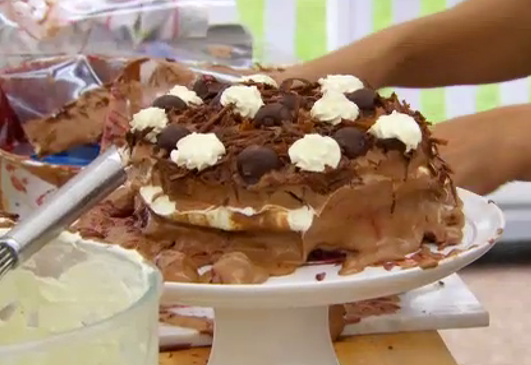 What can we learn about the viewership of GBBO from the social data we’ve been tracking?

It seems that the bulk of the cake-conversations are authored by women – 71% of the tweets we analyzed, in fact.

The most impactful tweeters watching the show were @BBCOne, who’ve tweeted 114 times, the show’s dedicated Twitter account @BritishBakeOff, who posted 254 times, with @RadioTimes and supermarket behemoth @Tesco closely behind.

It’s not just household names who have an impact, though.

Some superfans with large followings have been doing their bit to promote the show.

Who is going to win?

So, we all tweeted our way through the show, expressing joy at Mary’s pink blazer and despair when Dorret’s cake collapsed.

But how many have already expressed an early gamble on who might win the show?

After sifting through +30,000 media posts, we built a Query to track all tweets stating “I think/want [x] to win” about each contestant.

It’s early days, but it appears we already have a favorite. Off to the bookies we go.

Will he keep his lead? Will there be more soggy bottoms on show? And will Mary ever taste a cake with enough alcohol in it for her?

We’ve got a lot more data, so get in touch on the email address below if you’d like to see them, and we’ll be tweeting out social data from @BW_React every week. In the meantime, we’re off to buy some Battenberg.

To use these charts in your article, please contact [email protected]. Full data and methodology available.