Social Calls Out Sexism: Our Latest Data on the Olympics

The Brandwatch React team takes a look at the latest social data on the Olympics, taking a look at one campaign aiming to tackle sexist coverage.

The Olympics is going strong, and so is the social data.

Between the 5th and 18th August we found 19.9 million mentions of the Olympics online – it’s one huge discussion.

Rio 2016 has seen a lot of conversation surrounding the ways female athletes are discussed by reporters and news outlets and we found around 40k mentions of “sexism” or “sexist” since the games began. We decided to take a look at the data surrounding one particular campaign aiming to tackle it.

Strict rules mean companies need to tread carefully around using the Olympics as a marketing tool, but one brand has gone above and beyond with a campaign that calls out sexist coverage of female athletes’ achievements.

Dove’s campaign to change the narrative that frequently surrounds females in sport has taken off during the Olympic Games, and it has successfully called out various media outlets for their comments that stray away from athletic ability and towards appearances and clothing.

Encouraging audiences to directly respond to perpetrators of sexist coverage, the campaign has seen a huge response online (we found 35k mentions of it since the beginning of the Olympics).

The top mentioned terms used around the campaign are overwhelmingly supportive of its message.

The campaign has seen thousands of mentions nearly every day, and there have been various hours spiking throughout the Games as influential tweeters got on board. The campaign has had a lot of love, notably from Emma Watson on Twitter which saw mentions of the campaign sore on August 12th.

The Olympics are definitely having a motivational effect on social media. Within a 10% sample of all mentions, we found over 17k mentions of “inspirational” (and related terms).

Once again a girl has inspired a billion people! So proud! Salute to u & ur hard work?? #SakshiMalik #Rio2016 #ind pic.twitter.com/Bmi8uVPXxe

If you were hoping the gym will be quiet this weekend you might be disappointed. In fact, the fitness industry is banking on it.

Women in particular are being inspired by what they’ve seen at the Olympics this year. Looking at gender-categorized authors, we found more men than women talking about the Games online. But, when we looked specifically at mentions of “inspir-” and “motivat-” (‘-‘ representing variations of the end of the word), we found women were out-mentioning men. Gymnastics and swimming continue to dominate as the top two mentioned sports in the Olympics conversation, while tennis, soccer and badminton have also attracted thousands of mentions.

Breaking it down percentage-wise by gender, men are out-mentioning women massively when it comes to boxing, golf and basketball while women are more likely to discuss gymnastics and swimming more than men. Diving appears to be the most balanced of the top ten when it comes to gender-categorized mentions. 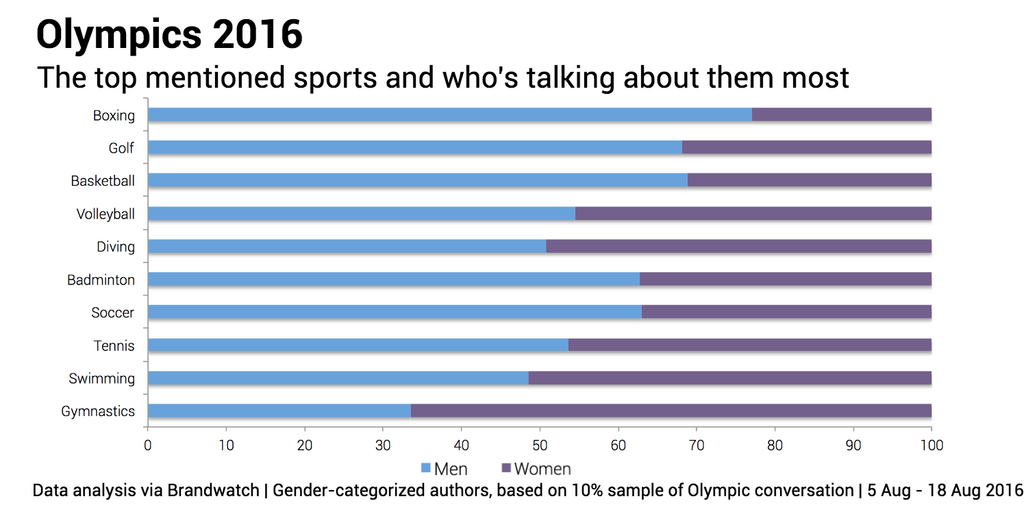