The Brandwatch React team have identified the most influential Democrats on Twitter. Find out which Democrats topped the list.

Social media has played a huge role in the Presidential Election, and millions have taken to Twitter to make their views known.

But who are the people being heard the loudest amid all the noise?

Recently we took a look at the most influential Republicans on Twitter, and now it’s the Democrats’ turn.

The Brandwatch React team have identified the most influential Republicans on Twitter. Find out which Republicans topped the list.

The Brandwatch React team used Audiences to search for Twitter users that self-identified as Democrats who had tweeted election-related terms in the last three months.

For example, an account that included “democrat” or “dems” in their bio who had tweeted the word “election” recently would be included in the wider list. We did not search for terms relating to individual candidates so the list is not disproportionately made up of Clinton supporters.

Based on these accounts’ interactions with others (the more influential the better), they were each assigned an influence score. In this article, we’ll list the top 20 most influential Democrats on Twitter.

Follower counts and account names were correct at the time of writing.

Unlike the Republican/conservative list, most of the top ten Democratic accounts were political heavyweights and well-known figures. 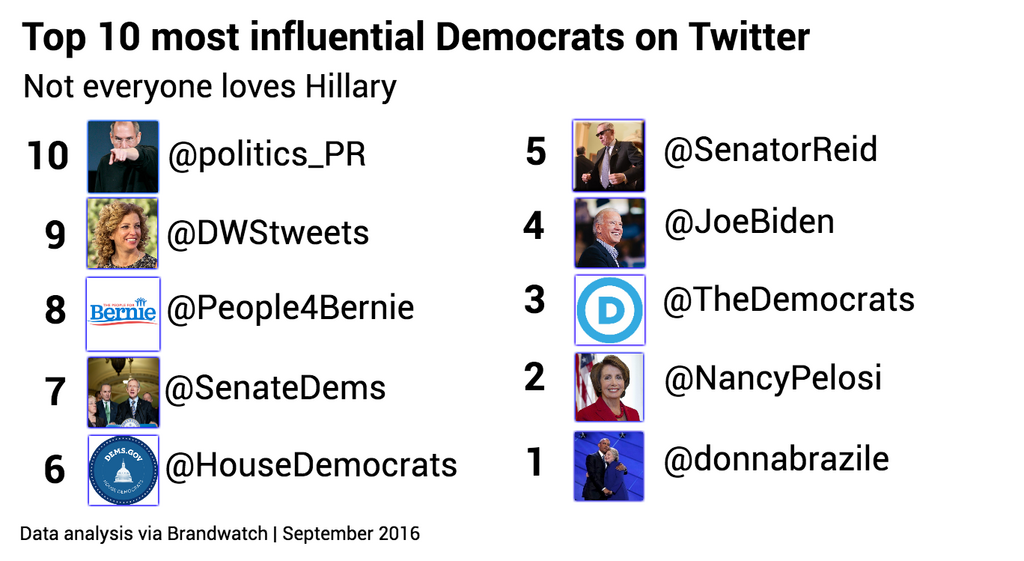 Now you’ve seen the top ten, you can take a look at our full list of twenty – and the tweeters get a little more eclectic as the list goes on.

Like we said before, there are plenty of organizational and official political accounts and not a huge number of tweeters that are influential in their own right, but you’ll definitely find a few in this list.

When we compared Clinton and Trump’s accounts we found Trump was in the lead by one point with a score of 95 and he continues to generate more mentions than his Democratic opponent.

Don’t be fooled, though – these accounts still have influence scores lowly tweeters can only dream of.

From authors to politicians to organizations, influential Democrats come in all forms and they all make a difference to the overall elections conversation.