Brandwatch analyzes tweets using the terms "Theresa May is a _____".

On Wednesday July 13, Theresa May will become the UK’s new Prime Minister.

That is, if there isn’t another tumultuous plot twist that has come to be expected in Britain’s chaotic political landscape.

Amid a vote to leave the EU, various high profile resignations and so much drama journalists’ hands are falling off from typing too fast, Theresa May has stood her ground and become the final remaining candidate for the Conservative party leadership and, by extension, the UK’s new Prime Minister.

The news became clear when Andrea Leadsom withdrew her campaign on Monday after causing controversy over the weekend. 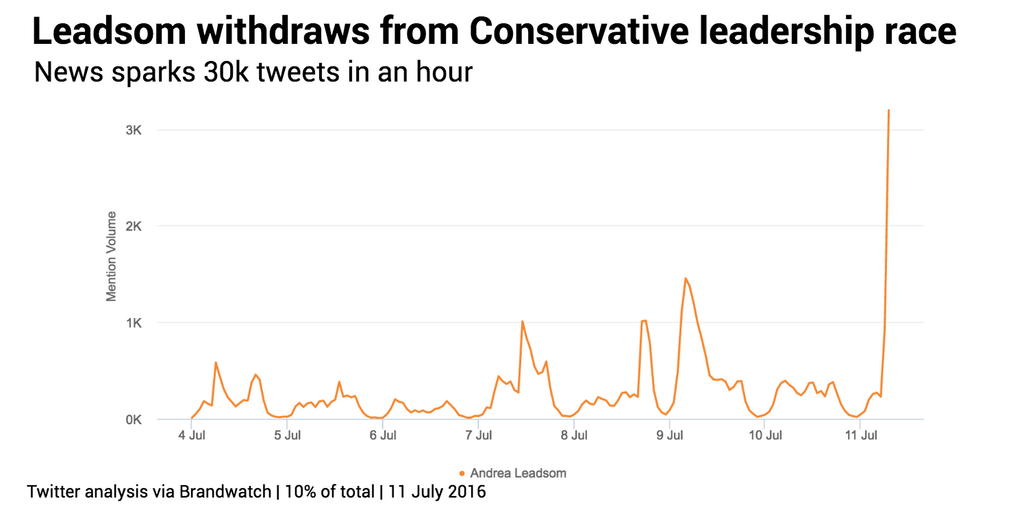 Twitter has been alight with political conversation ever since #Brexit, but what can we take from it?

Warning: Tensions are running high as people passionately debate whether May is the right person to lead our country in a time of enormous political upheaval.

That’s not an excuse for personal attacks, but be aware that there may be some bad language in the paragraphs ahead.

Making sense of it all

Amid all the chaos, we decided to take a zoomed in view on the data, building Queries around a specific phrase: “Theresa May is a(n) ____”.

Prepared for a lot of nasty words and wondering whether her supporters would outweigh the haters, we gathered a week’s worth of Twitter data (just over 1,000 mentions) between 5th and 11th July. 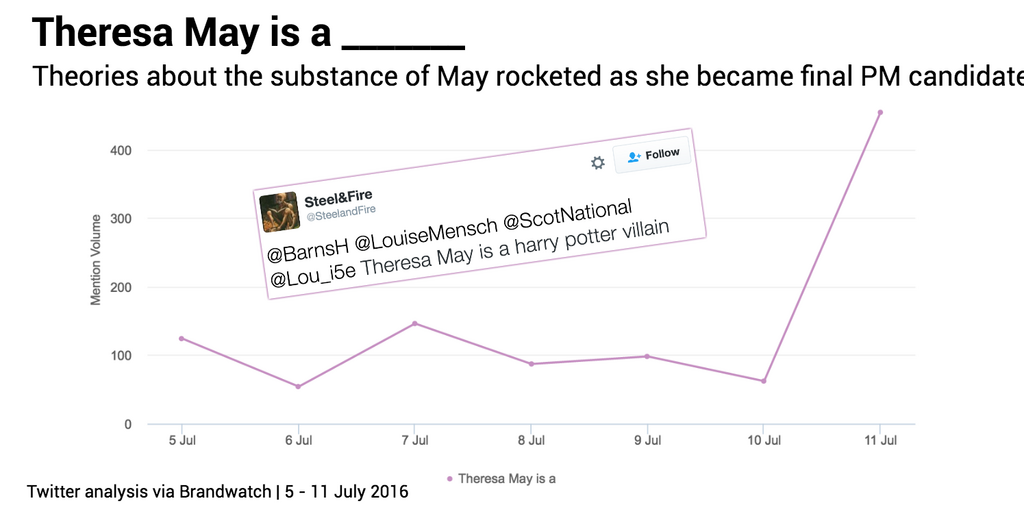 Twitter often has a fairly heavy left wing bias, so this data doesn’t necessarily offer wide breadth of opinion on May.

It does, however, give some insight into views that are shared by large groups of people and the highly skilled use of metaphor and hyperbole by many commenters.

We selected groups of phrases based on their frequency in the dataset. Using a topic cloud, we identified the terms being used most, grouped them and analyzed them as broken down in this post.

We searched the mentions for tweeters using words like “great,” “strong” or “safe” to describe May and she certainly does some have support on Twitter.

We found around 19 positive mentions of this kind of the politician.

@AndreaLeadsomPM can we trust her? No we can’t. @TheresaMay2016 is a safe pair of hands and can be trusted.

#TheresaMay is a person of integrity and purpose. Will be a great Prime Minister in very difficult circumstances. @TheresaMay2016#TM4PM

“A safe pair of hands” was a heavily used term, particularly around her ability to handle EU negotiations, but it’s often contested by other users.

The “Theresa May is a safe pair of hands” myth https://t.co/sx8i9F1hcc

When Ken Clarke was caught on camera describing May as “a bloody difficult woman” a week ago he was unaware of the weight his comments would have.

We found 46 mentions of “bloody difficult woman” in our research – most of those occurring on 5th July when the Ken Clarke news broke.

It turned into something of a viral sensation with many people seeing it as a compliment.

And the fact Theresa May is a #BloodyDifficultWoman is why I want her as next PM. Merkel won’t be able to bully her around like Dave

Saying that, not everyone used the term in a positive way.

Theresa May IS a bloody difficult woman, if by that you mean she hates migrants & refugees

It’s not a phrase one of her top competitors Michael Gove had an equivalent for in his top mentioned terms.

Gender has played a huge and widely criticized role in the coverage of the Tory leadership race.

From prolonged focus on the female candidates’ appearances and attire to sexist comments online it’s not been an easy ride.

Meanwhile, Leadsom’s comments suggesting that being a mother made her a better candidate resulted in widespread criticism and she was forced to apologize to her opponent.

Looking specifically at mentions of May we found a lot of misogynistic terms directed at her.

Whether May should be considered a “feminist icon” has also been up for debate, with the term popping up in our topic cloud of frequently mentioned phrases.

Me when media claims Theresa May is a feminist victory just because she’s a woman pic.twitter.com/PXvIuDlZVQ

“theresa may is a feminist icon!!!” pic.twitter.com/ivQFSTAMBV

Politicians are often called liars and hypocrites and often rightly so.

We compared May’s mentions of “liar,” “lying” or “hypocrite” with Andrea Leadsom’s and found she actually came out much better.

May got about a third of the angry “liar”/”hypocrite” mentions Leadsom did.

Theresa May is genuinely evil and Andrea Leadsom is a clueless liar. Give me strength.

May’s political competence has also been called into question, with “failed Home Secretary” coming up as a top mentioned set of words.

Theresa May is a failed Home Secretary and a bad choice for PM https://t.co/QXJQyFud03

A creature of myth?

While being a lying difficult woman might be bad enough, many believe May could be a creature of legend.

There were 14 mentions of “Theresa May is a (occasional extra word) witch” with this one being the least burning.

theresa may is an evil witch pass it on

What is Theresa May?

The Twitter data reveals mixed feelings, characteristic of the uncertainty in the wider world.

What’s clear is that there is a lot of skepticism and that’s something May will have to deal with both online and off.

Are you a journalist looking to cover our data? Email us [email protected] for more information.