React: Trump Knocked Off Perch By Carson In Third Debate

For all the Trump haters out there, three was most definitely the magic number.

Last night’s debate saw a serious shake up in the balance of power, or balance of popularity in this case, as the race leader, Mr Donald Trump was well and truly knocked off his perch.

The days leading up to the third GOP Presidential debate gave some insight as what was to come – mainly driven by the fact that Ben Carson snuck ahead of Trump in Iowa and later became the lead in the national polls (26%).

This was a shock to everyone, including Trump. While the lead still stood within the margin of error of 6% it was still a significant moment for all of the Republican candidates and the party as a whole.

A tale of two pies

In the moments preceding the debate, we took a look at a comparative share of voice for the candidates which painted an indicative picture of the race at the time.

Trump had dominated in terms of both media coverage and hype.

Trump fared relatively well during the debate, despite forgetting his stance on the H1B visa, and managing to avoid grossly insulting anyone. All in all, he failed to shine.

On the other hand, the Ted Cruz camp will be very happy with the senator’s performance in Wednesday’s debate.

Capitalizing on his favorable position going into the debate, Cruz came out sounding like the voice of reason but, everything is relative.

The pinnacle moment for Cruz was when he called out the CNBC debate moderators for pitting the Republican candidates against each other instead of asking debate-worthy questions. 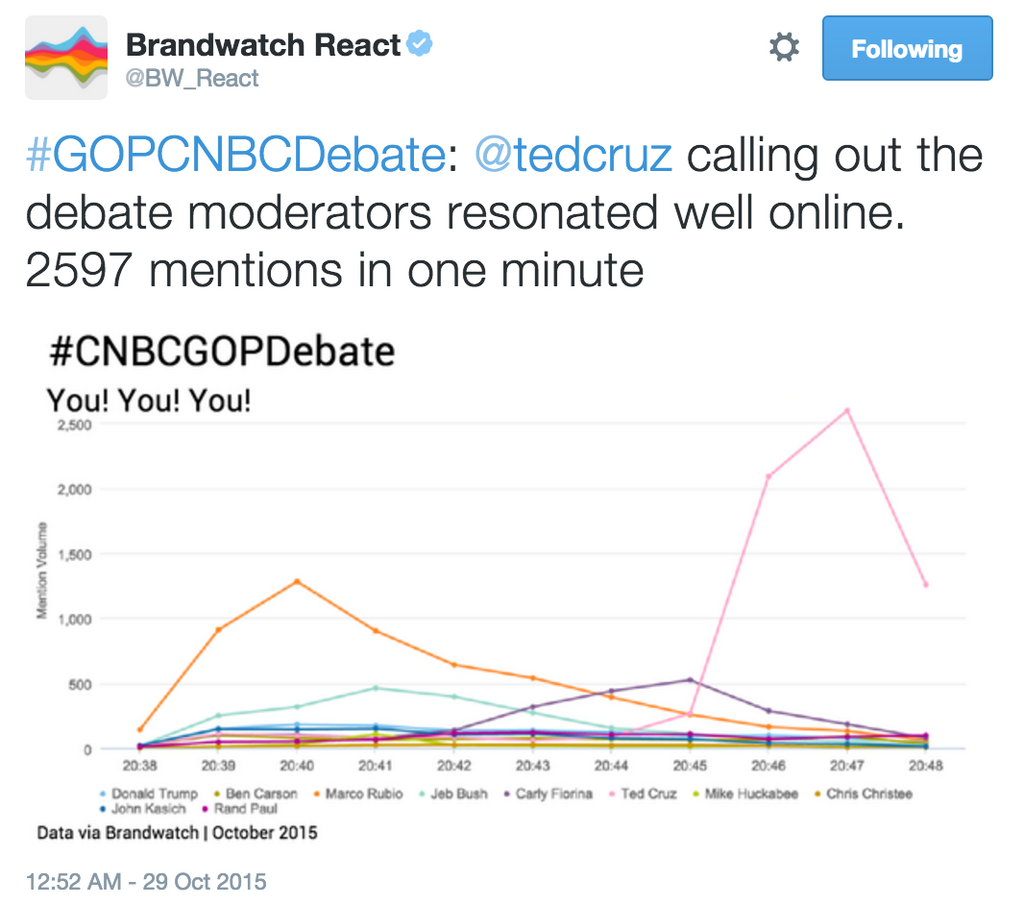 Side by side the charts say a lot. 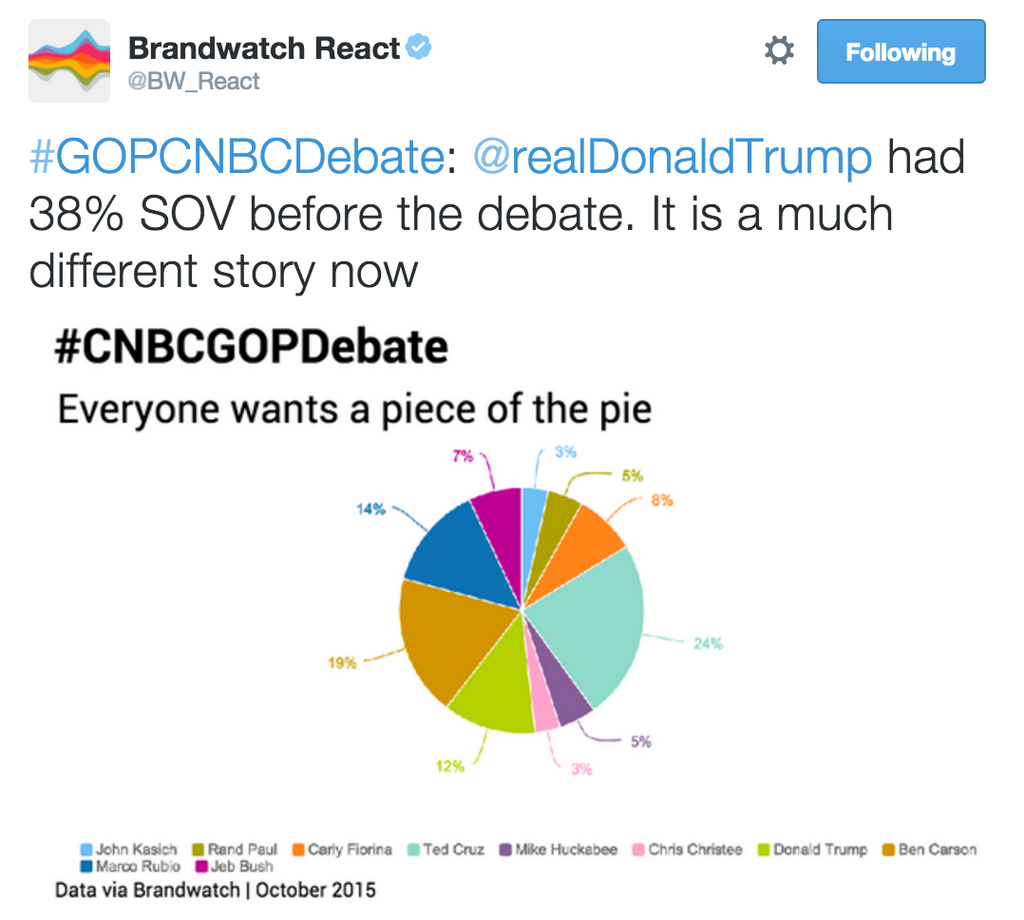 If the GOP handed out medals after every event, Ben Carson would have the gold around his neck right now. One can only imagine that the former neurosurgeon was feeling somewhat smug entering Wednesday’s affair as would anyone having been the subject of many of Trump’s attacks, 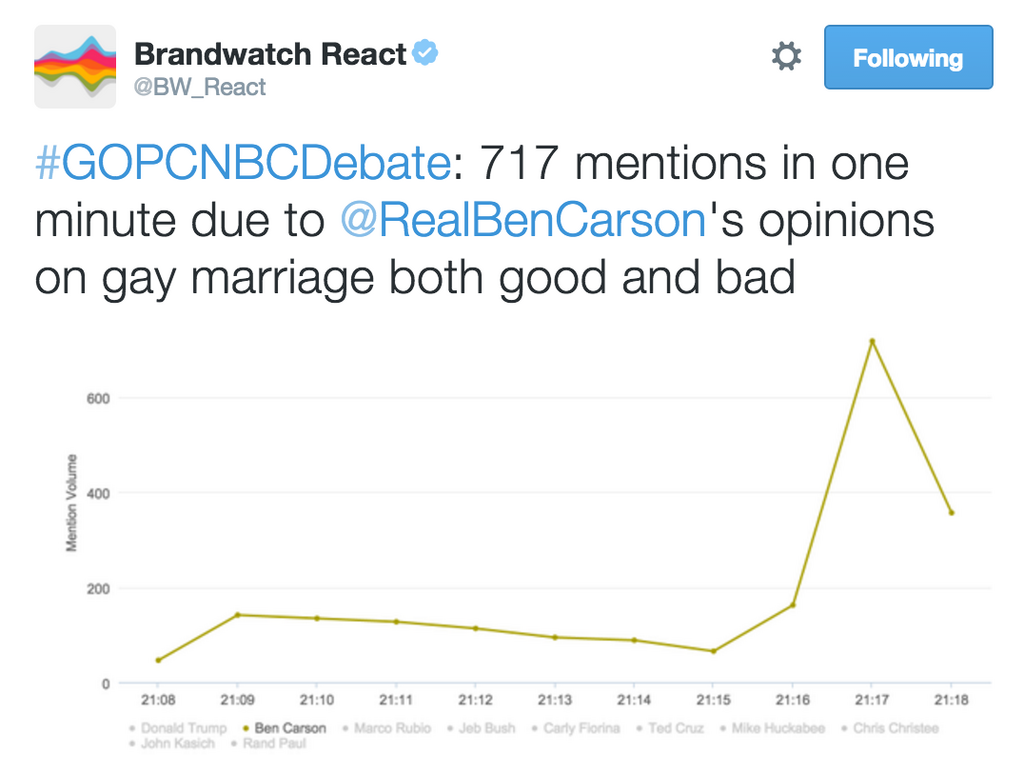 The battle continues for the two leading candidates; Carson is leading in Iowa, a state where Trump has focused his campaign efforts, deploying 13 campaign staffers and a network of volunteers. In fact, Trump has the largest Republican presence in the state. Candidates, voters and onlookers alike are all acutely aware that in order to succeed in the Iowa caucus candidates must appeal to the religious vote. One would think that this automatically poises Ben Carson as a favorite due to the evidentially unpredictable nature of the Republican race, a sure thing is something candidates can only dream of. Trump’s inability to remember his religious beliefs isn’t going to win any favors with evangelical or presbyterian voters.

The rest of the pack

This debate was important for all of the candidates, not just the leaders. The need to perform was wholly pertinent for candidates such as Rand Paul and Jeb Bush, who have so far failed to wow on stage or in the polls. Despite Bush garnering more raw online mentions (46,856) than Fiorina, neither Bush nor Paul made much ground. Carly Fiorina shared a similar plight, the former CEO had a stand-out performance in the last debate yet that success failed to reflect in the polls the weeks following. Yet again, Fiorina came across well and defended herself adequately against questions of her efficacy as HP CEO.

Taking the data into account, Fiorina spoke for the longest, 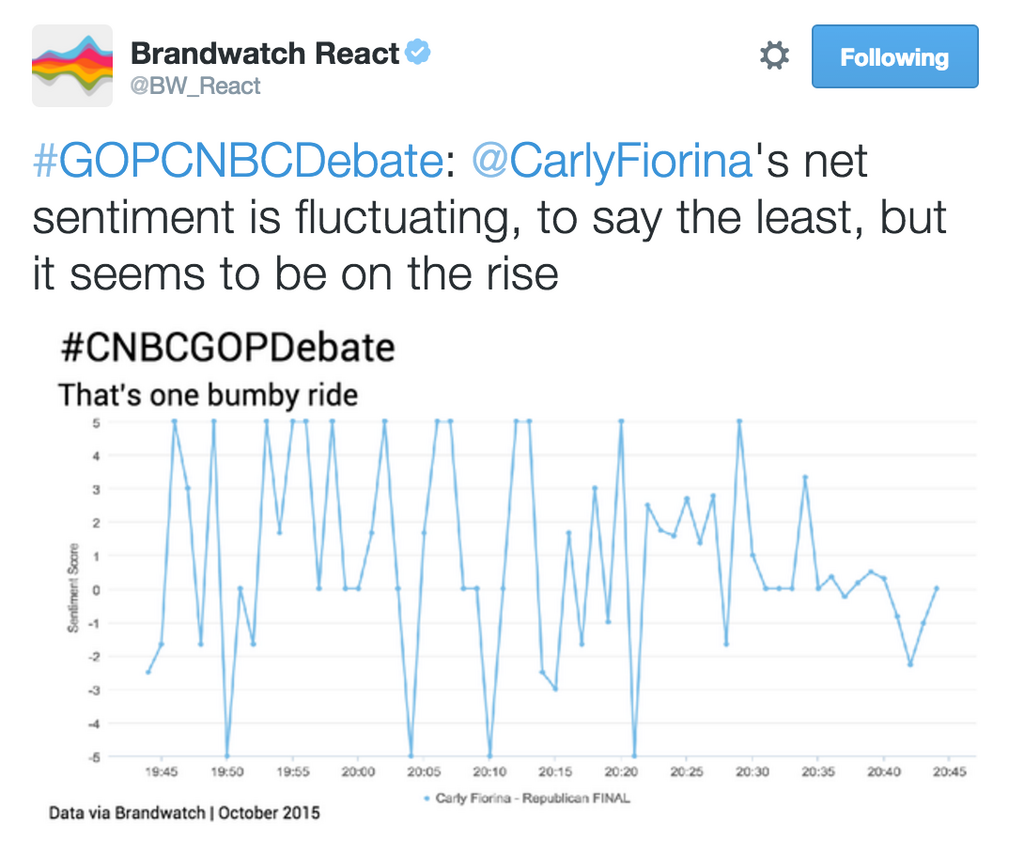 One of the most notable moments of the debate came when senator Marco Rubio called out the Democrats and the mainstream media, comparing the latter to “the ultimate super-pac”. We don’t know if this had a direct impact on his sentiment score but Rubio finished on a high with 61% positive online sentiment. 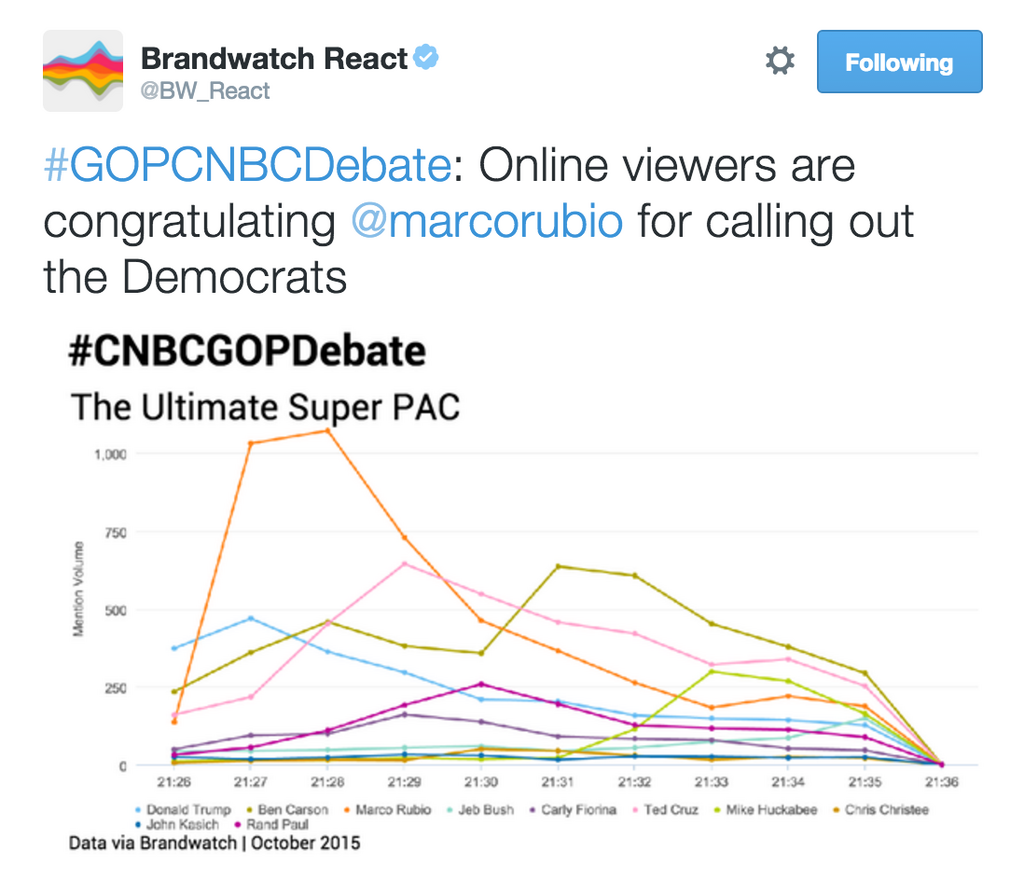 Huckabee had a good debate and came out close to the top in the sentiment polls although he let a few people scratching their heads when he compared the American government to the runaway blimp in Maryland. Best not to ask.

He came out of the gate attacking the rest of the GOP field instead of answering the question on hand – “What is your biggest weakness and what are you doing to address it?”.

Later on he again zoned in on Trump and Carson by bringing the applicability of their fiscal plans into play.

The next GOP debate takes place in November. We can only imagine what will happen between now and then but one thing is certain, things just got interesting.