The Brandwatch React team have been experimenting with Twitter threads. Here we share our results and the reasons we love the new phenomenon.

So much has been written about Twitter threads of late that it’s as if a new social media platform with many thousands of users has hit the internet by surprise, ripe for thinkpieces on their merits and downfalls.

Politico calls them “the compelling, incendiary literary form of the Trump era”. Deadspin says, in one of the cleanest excerpts from this critical article, they’re “like being on a soapbox and having 10 megaphones lined up single-file in front of your mouth.” Also that those who converse within Twitter threads are “fart sniffers”.

In a more sympathetic analysis, The Verge likens Twitter Threads to poetry.

Despite their admittedly numerous limitations, I personally think Twitter threads are brilliant.

They enable the writer to string together a whole narrative – one that spans an emotive five minutes or a carefully curated year. You can tell a story with a couple of words, no doubt, but a Twitter thread gives you the space to say so much more, with so much illustration and deliberate pacing.

All without directing your readers’ attention away from the platform, with the loading times, pop-ups and other distractions on a site that so often send them heading for the close button. (I’ll get to the problems with that, but first the good things).

Twitter threads aren’t exactly new, but there’s been a huge amount of hype around them lately.

Along with Google Trends data, we searched for mentions of Twitter threads on Twitter over the last few months. There’s been an obvious increase in commentary surrounding them, as well as retweets and threads themselves. 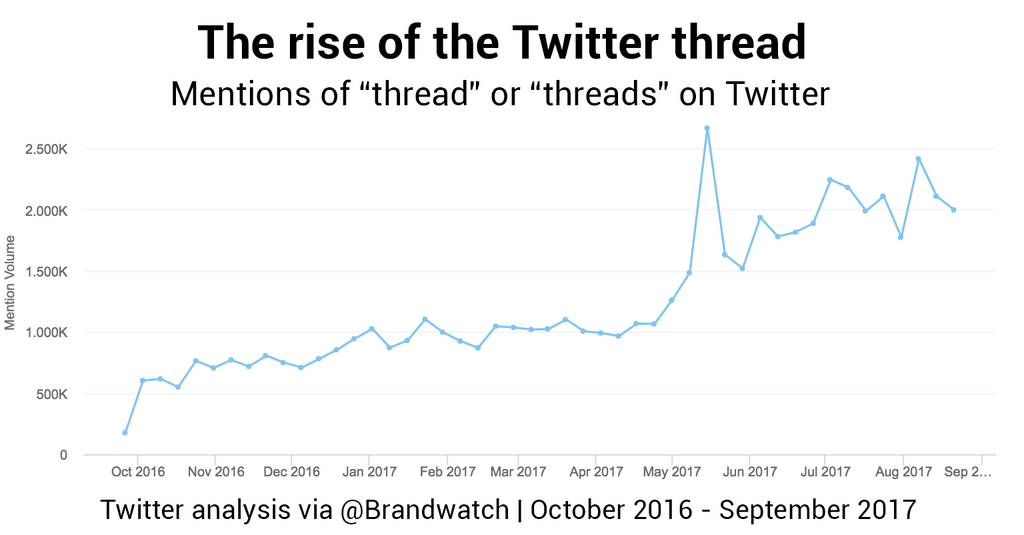 The potential for masterful storytelling

The Twitter thread can be used by established wordsmiths and storytelling amateurs alike for big impact.

In the wake of the Parsons Green bomb attack last week, history writer Mike Stuchbery used a Twitter thread to school pessimists on the many things Londoners had survived.

The length, the illustration and the scale of hardship incorporated into the thread wouldn’t have half the impact a single tweet might.

According to @PrisonPlanet, Londoners are 'gelded'. Perhaps a little lesson in what Londoners have endured is in order… pic.twitter.com/yFmsJGqCbB

Here’s an example of a post from someone who at the time of writing calls themself “yeehaw girl”.

Yeehaw Girl set Twitter alight when she revived a years-old theory that Avril Lavigne had died early in her career and that a lookalilke had taken her place. If the Twitter thread is the new medium it is often lauded as, think of this blog-theory-turned-twitter-thread as Stephen-King-Novel-Turned-Blockbuster. Just with less money involved.

This thread, like the theory, is huge and detailed, compiling text, video and image “evidence” for the theory and it got an enormous amount of engagement – even if a lot of it was highly skeptical.

We actually covered this post and provided data around the theory it described in another blog post (one that continues to bring in thousands of searchers for “Is Avril Lavigne dead?” on Google) – check it out here.

avril lavigne is dead & was replaced by a look alike: a conspiracy theory thread pic.twitter.com/9eearQ2rte

Here’s another brilliant example – this time of the horror genre.

As someone who can’t watch the beginning of the ‘It’ movie trailer without crying into my couch, I found this thread genuinely terrifying. Scrolling slowly further down, finding images that (non-conclusively, of course) document the haunting was something akin to watching a horror movie through increasingly small cracks between fingers. For me, it was one of the most impactful uses of a Twitter thread out I’d ever seen – perhaps because it lost me sleep.

So, my apartment is currently being haunted by the ghost of a dead child and he's trying to kill me. (thread)

Threads are for engagement, not for selling

Twitter threads are a way to get everything out there in one go without sending people to a site where they might need to search the page for the relevant information.

Threads offer this option – get all your content out there, get everyone commenting.

We’ve been experimenting with Twitter threads on various React blogs over the last few months. Their contents have been some of the top-retweeted content of ours on Twitter in the time period, and we get plenty of engagement from them in the form of quoted tweets and comments.

The story of how @Starbucks is probably spelling your name wrong on purpose: thread pic.twitter.com/vDh56JXLuy

Did @Harry_Styles' appearance in @DunkirkMovie bring in an audience that wouldn't have cared otherwise? It's data thread time: pic.twitter.com/W8xu3Tfpvp

Our plan has been to tell the outline of the story of a blog post, and link to it at the end in the hope that we’ll start a conversation with our followers and theirs and that the true data fans who want more on the methodology or to learn more about Brandwatch will reach the bottom and click.

It’s kind of like an extended teaser tweet. Sometimes insights like the ones we create aren’t so interesting in isolation, and threads allow us show how they fit together.

By putting everything out there (or at least a large chunk of it) you aren’t exactly pressing people to click through. Threading doesn’t necessarily pay, so you’ve got to be clear about what you want from them.

While I was writing this I became aware of the irony of writing a blog post about the merits of threading that would inevitably be posted to social, pulling our busy followers onto the site instead of just handing them all the information in a lengthy thread.

Are you a journalist looking to use our data? Want to repurpose this blog post? Email us at [email protected] with questions or requests. 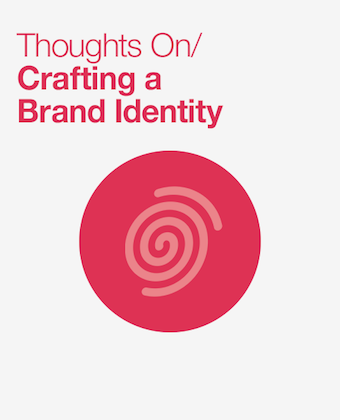