React: The Fan Theories Making a Splash on Twitter

Whether they’re “blowing minds” or totally inconceivable, they’re a special part of an online community of fans surrounding a show, movie or book.

My favorite fan theory by far has to be the theory that Home Alone is a prequel to Saw. Look it up. It’s beautiful and childhood-ruining.

We took a look at data on tweeters discussing fan theories dating back to January 1st to try to get a sense of the shows generating the most fan theory interest online these days.

We found an incredible 23.5k mentions – including retweets – of different fan theories online and broke them down. Here are the results.

TV: GoT is driving imaginations wild

It’s no surprise that Game of Thrones is generating thousands of mentions.

The seven kingdoms offer plenty of room for speculation as to how characters are connected and what’s going on behind the scenes.

We used topic clouds to identify some of the most popular TV shows being mentioned alongside “fan theory” (and related terms). 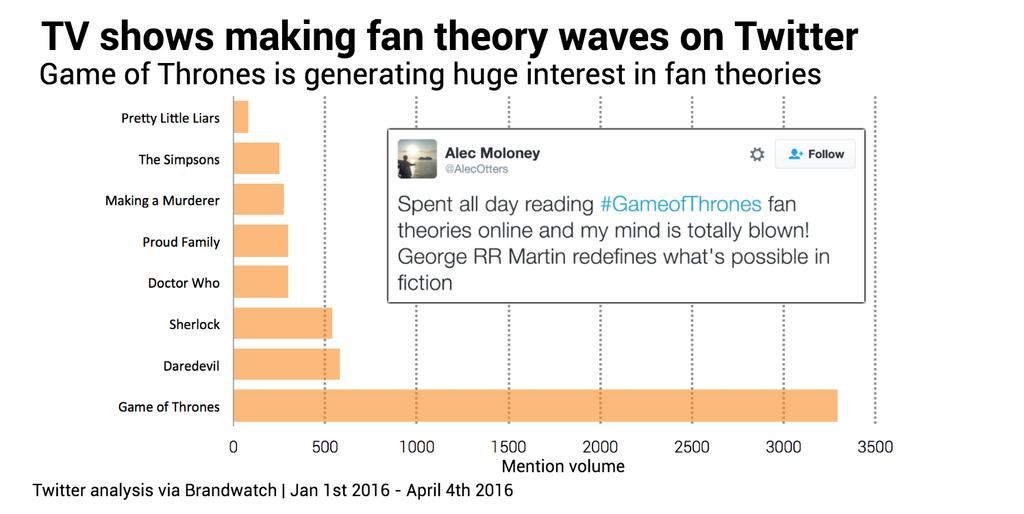 British shows Doctor Who and Sherlock were surprisingly popular alongside Netflix giants like Daredevil and Making a Murderer.

Movies: Star Wars inspires theories that are out of this world

If Game of Thrones is the obvious TV winner, then Star Wars is the movie equivalent with over 3k mentions. 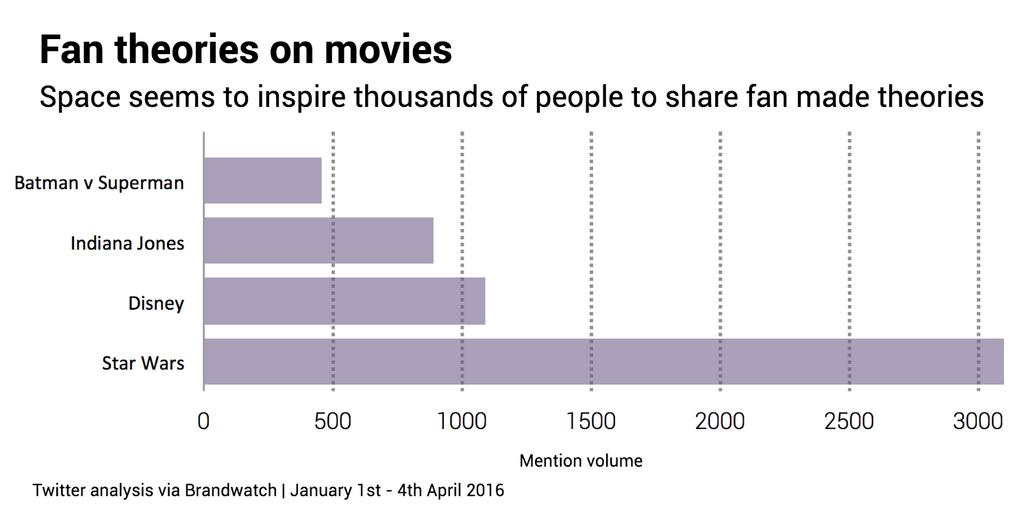 The term “Disney” also peaked over 1,000 with a whole lot of articles being shared that summarize the coolest fan theories around their films.

Batman v Superman deserves a special mention since it’s so topical. Many fans have been testing the idea that the latest film is connected to Suicide Squad, although that’s now looking unlikely.

Twitter’s most shared fan theories of 2016 so far

So, while those are some of the films and shows that are generating loads of shares on related fan theories, here are the links themselves.

Based on the high volume of tweets containing them, here are some of Twitter’s most shared fan theories of the year so far:

We took a look at the most retweeted accounts when it came to fan theories. Why not check them out?

Where do you go for your dose of fan theory goodness?