US Election 2020 Data: The Impact of the First Presidential Debate

Do debates change minds? Which candidate caused the biggest splash online? And what are the issues likely Trump and Biden voters care about most? Find out in our analysis of the first 2020 presidential debate.

The presidential debates are a big deal.

Not only do they test the candidates’ mental acuity and allow them to present their platforms, they’re also widely watched. A recent Brandwatch Qriously survey we conducted found that 50% of American adults planned on watching the debates in some form, including clips and highlights.

In other words, America is watching.

Here, we’ll take you through social and survey data on reactions to the first presidential debate. This analysis originally appeared in our US Election Bulletin (sign up to get the latest polling data and election insights, straight to your inbox).

Recent Brandwatch Qriously research has found that 27% of likely voters who planned to watch the debates, including clips and highlights, have been waiting for them to make a final decision.

This shows how much is at stake – not only do candidates need to impress undecided voters, but also people who are likely to support them.

With the first debate’s topics announced in advance, we used Brandwatch Qriously to ask people which issues were most important to them (using the same wording as the moderator Chris Wallace). 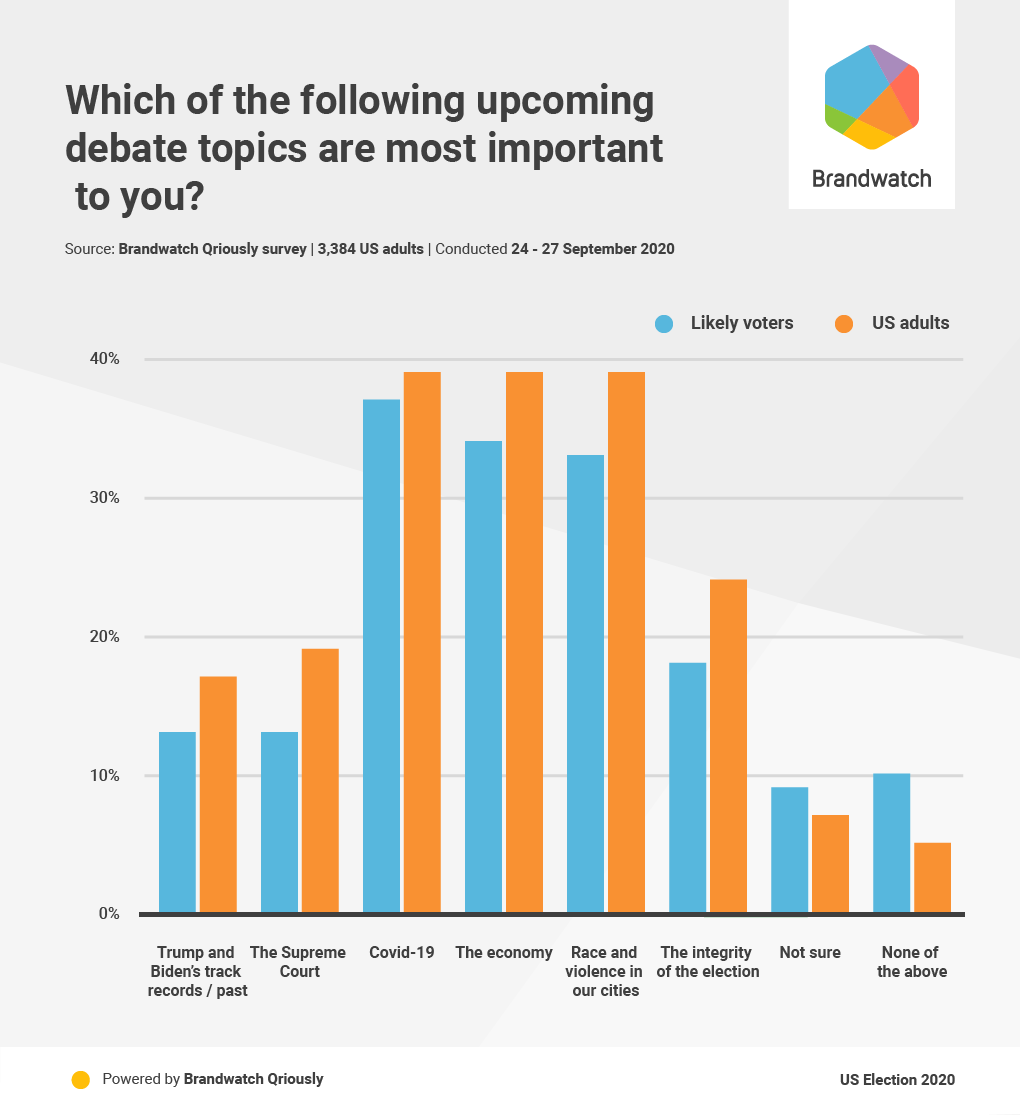 Covid-19, the economy, and “race and violence in our cities” come out way ahead for both the average American and for likely voters.

Despite the recent death of Supreme Court Justice Ruth Bader Ginsburg, the Supreme Court is not cited by many as a key topic. The same is true for the track records of both candidates.

Let’s take a closer look by splitting out our results by Trump, Biden, and undecided voters. 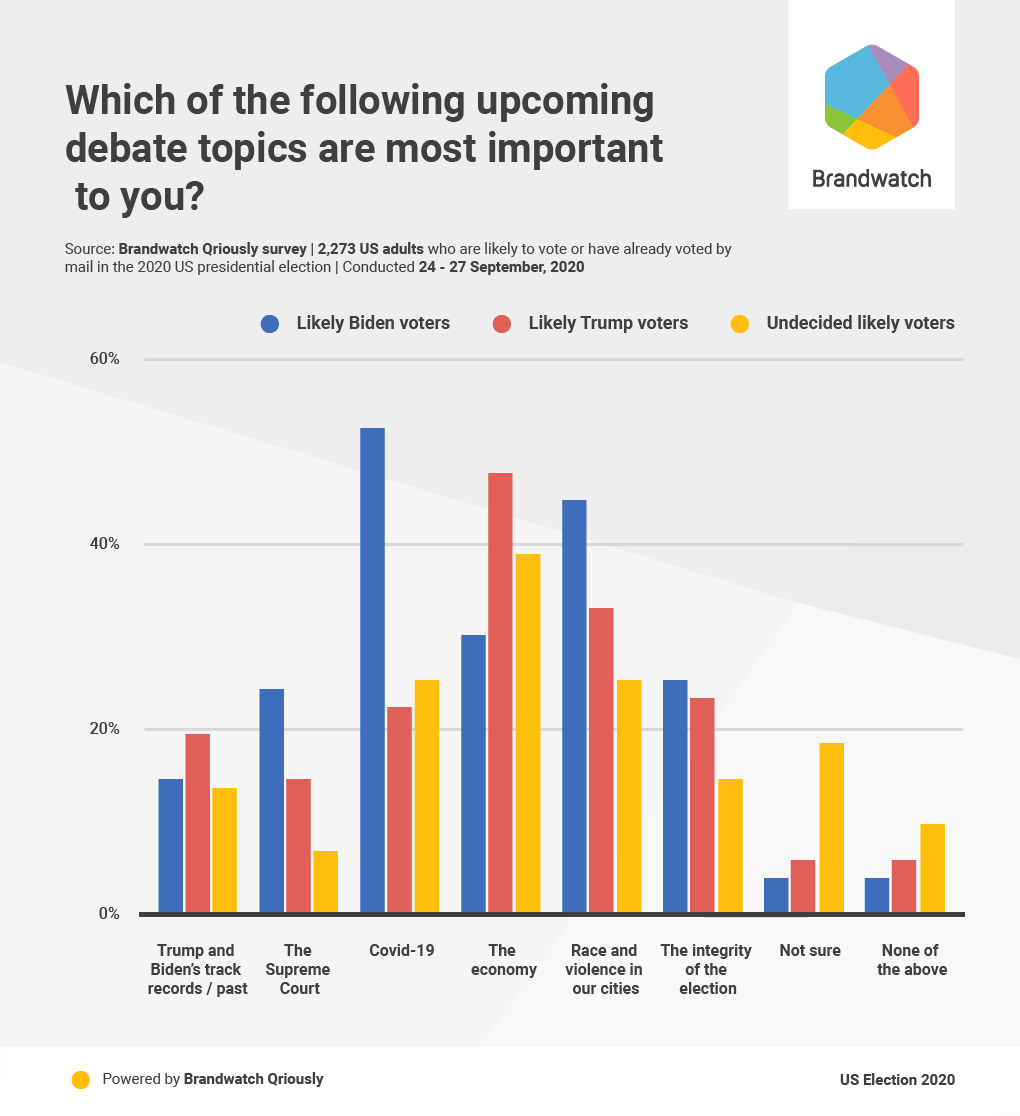 There is some clear divergence on the issues here. The biggest issue for likely Biden voters is Covid-19, while for Trump’s it’s the economy. Both groups cited “race and violence in our cities” as the second most important issue.

For undecided voters, the economy is the most important issue. As this is something they share with likely Trump voters, this may give him a little more opportunity to gain ground.

Nevertheless, their next two important issues are Covid-19, and “race and violence in our cities”, suggesting both candidates will have scope to bring these undecided voters onside.

Now that we’re post-debate, were the issues reported as most important above given a lot of attention? Very much so. 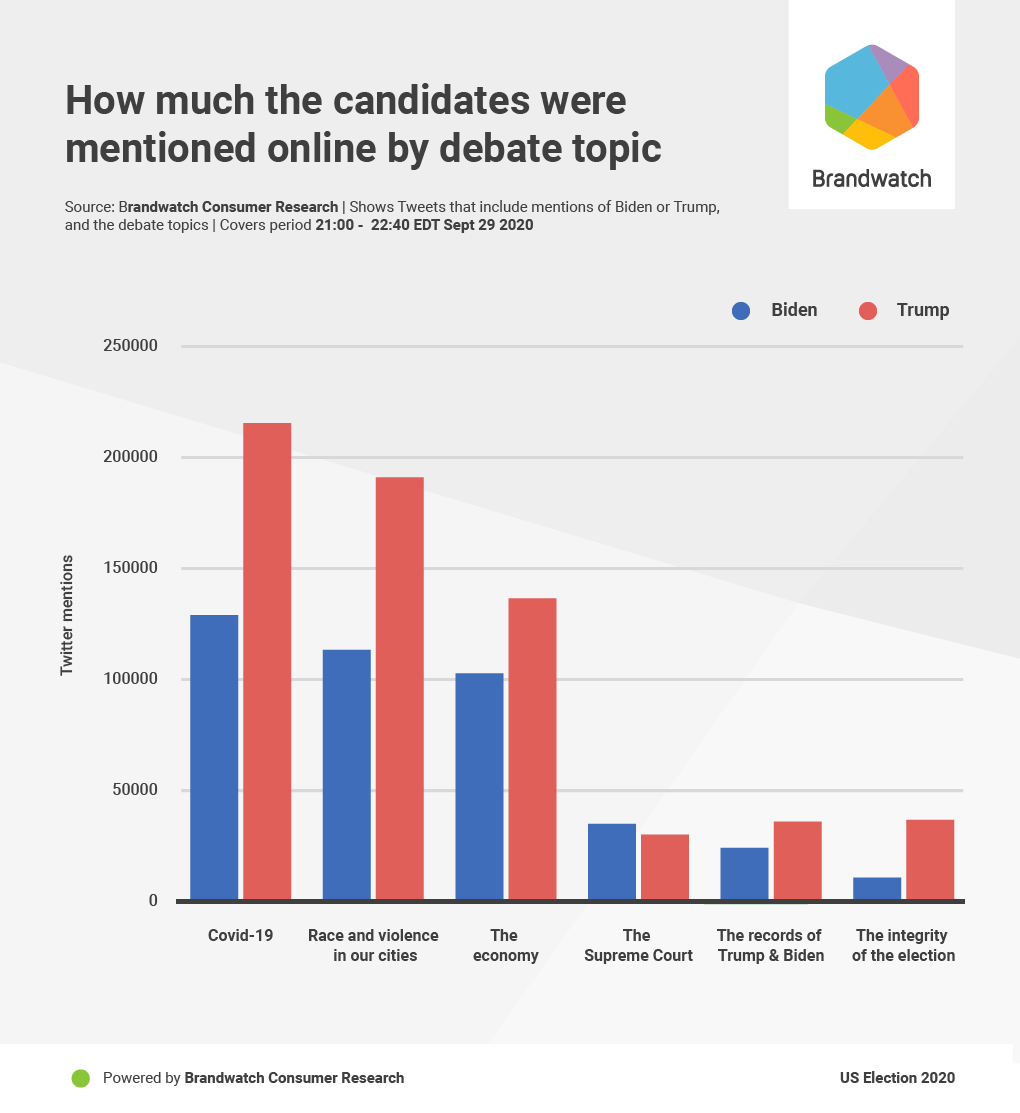 Our Consumer Research platform found that Covid-19, “race and violence in our cities”, and the economy were by far the most mentioned chosen debate topics on Twitter in relation to the candidates.

With Covid-19 up top, and the economy coming third, this suggests likely Biden voters got more of the topics they were looking for than likely Trump voters.

We should note here that these mentions were mostly negative, attacking the candidate for their stance or record on the topic. This means that while Trump got the most Twitter attention, he was also the most criticized candidate.

We tracked reactions to the first presidential debate live on Twitter as it happened. Here are some highlights:

If you’re interested in more US Election 2020 data, make sure to sign up for our weekly newsletter. We share our latest polling results, plus insights on the big issues of the week.

And, if you want to have a dig around or do your own analysis, you can find our tables and the raw data here.