Whiskey Drinkers: What Can Social Data Tell Us About Their Behavior?

The Brandwatch React team dives into some slightly tipsy social data on whiskey drinkers to see what insights can be found.

150 years ago the very first registered distillery in the US was established, opening next to Lynchburg’s greatest natural resource: the crisp, cool, mineral-rich Cave Spring Hollow.

The hollow was purchased for $2,148 by the then Master Distiller, and its water would be a key ingredient in every bottle of whiskey the distillery produced.

While minor set-backs like the Great Depression and Prohibition threatened the distillery, it’s fair to say that today business is booming.

You’re probably familiar with the original owner; his name was Jack Daniel.

How’s that for ROI?

A lot has changed in 150 years

Jack Daniel’s prides itself on its (albeit controversial) history, but today’s liquor market finds itself in a much different place to when Mr Daniel purchased Cave Spring Hollow. 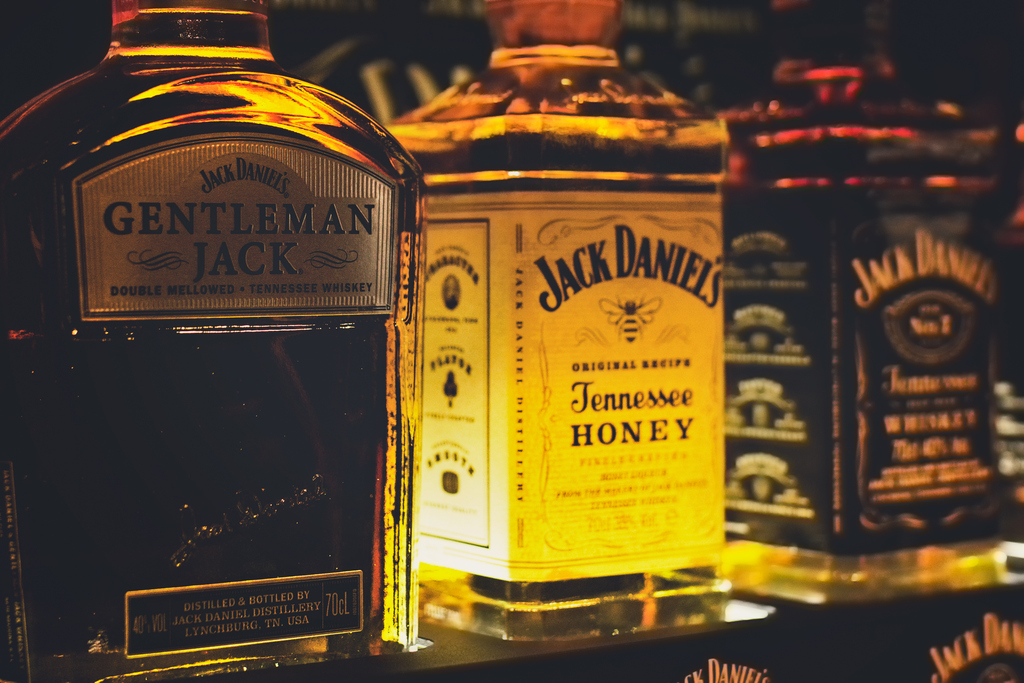 Whiskey has gone mass-market and, in the age of the customer, is in a place where listening to the needs and preferences of consumers is more important than ever.

Feeling festive and with the help of Brandwatch’s fantastic Research Services experts, the React team took a dive into the data surrounding whiskey (and “whisky”) drinkers to see what can be learned about those who are fond of a tipple across the pond in Britain.

We analyzed UK-based whiskey conversation across social media between December 2015 and June 2016 to see what insights we could find in the whiskey conversation. From whiskey types to key whiskey-related occasions and the differences between enthusiasts and standard drinkers, our analysis of personal conversations surrounding whiskey (excluding RTs and news items) goes into the online interests and behaviours of British whiskey fans.

Despite it’s American roots, Jack Daniel’s is one of the key parts of the conversation.

Whiskey related conversation definitely peaked in times that were important to the UK and Scotland.

Christmas Day, Burns Night and EU Referendum day were key times to talk about whiskey drinking in the period we measured.

While Christmas and Burns Night are fairly predictable whiskey drinking occasions, the EU Referendum conversation was focused both on the consumption of whiskey and the effects of Brexit on the industry. Meanwhile, 10pm is the time of day we like to talk about whiskey most. It’s definitely a drink that goes down best late into the evening, according to social media. 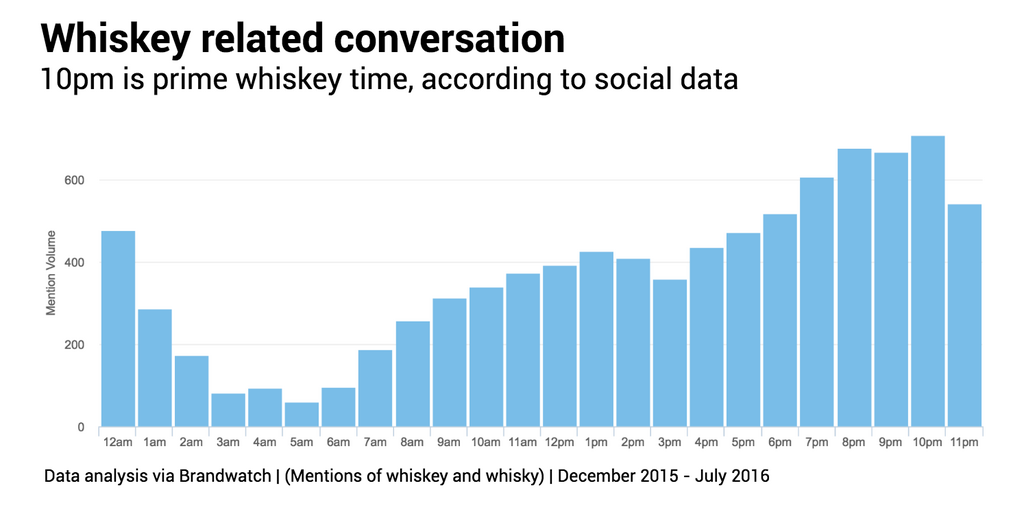 We also found that whiskey drinking conversation saw its largest volumes on Friday, followed by Saturday.

If you’re a whiskey brand looking to sponsor some ads on social, paying attention to the times your British audience is online is a very good idea.

The team took a look at the ways British people like to enjoy whiskey most.

These are the most popular ways people talked about their whiskey online in the period we searched for. 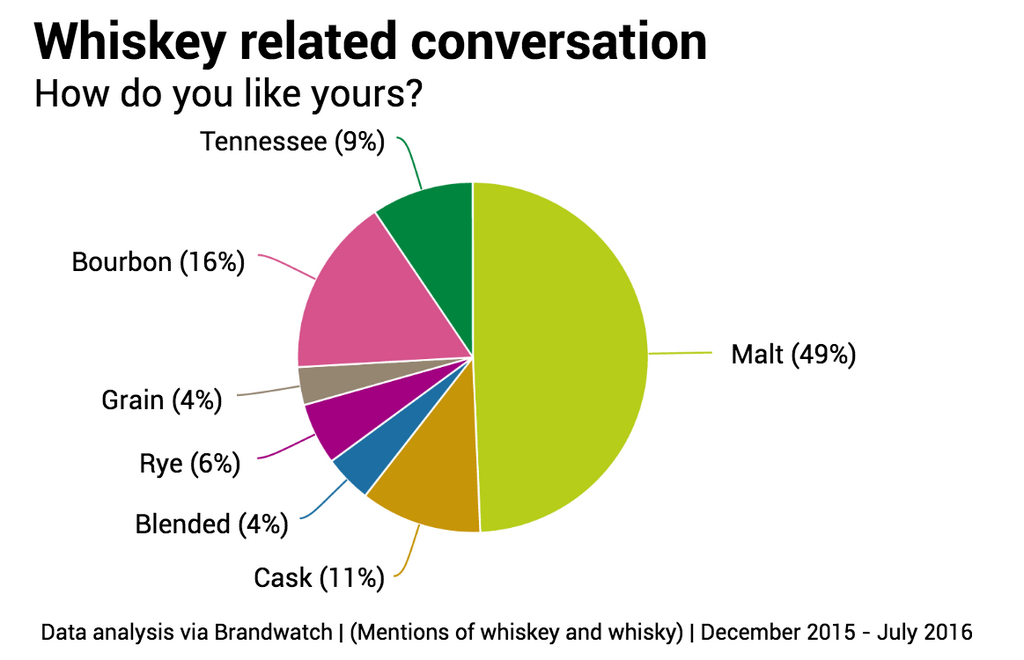 Meanwhile, Brits seem to prefer their whisky with something as opposed to neat. 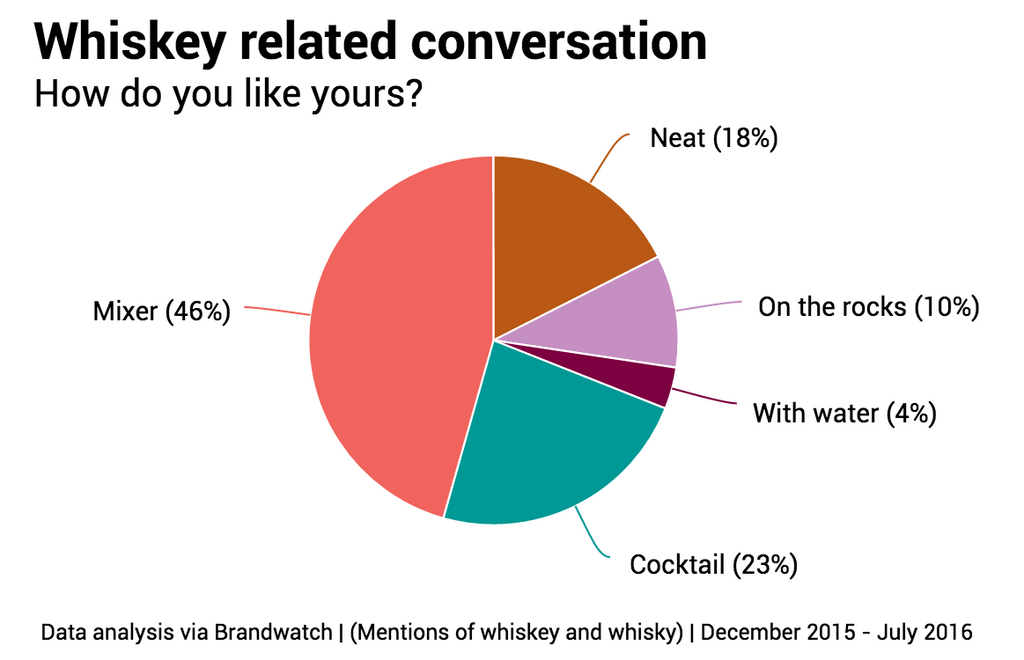 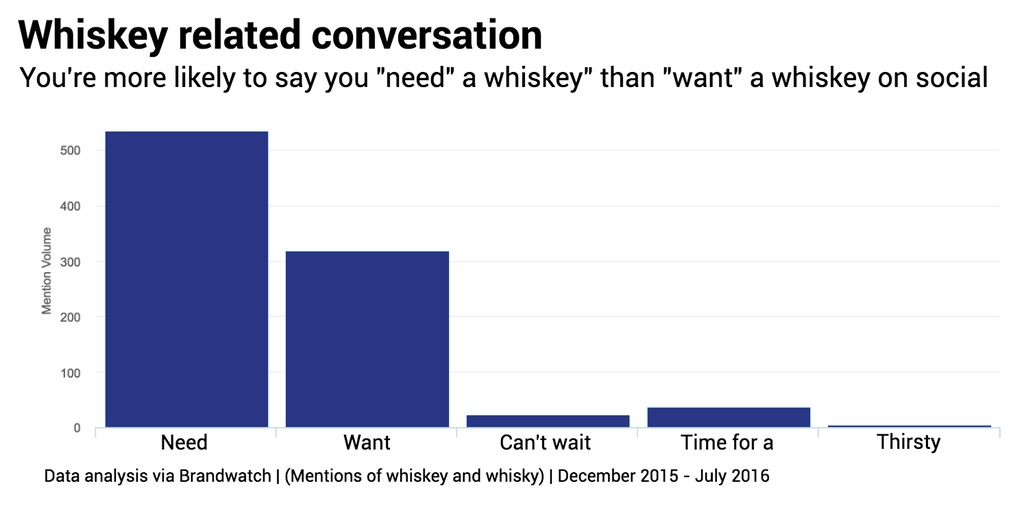 Put that bottle down.

Using our new tool, Audiences the team were able to identify whiskey enthusiasts (people with whiskey in their bios) and general whiskey drinkers, who had talked about whiskey over the previous six months.

Taking these author panels, it was possible to identify key differences between them. Please note, this data is from Twitter only.

Looking at gender-categorized tweeters within those panels, we found 21,040 whiskey enthusiasts and 39,031 standard whiskey drinkers. In both cases, they were more likely to be male. 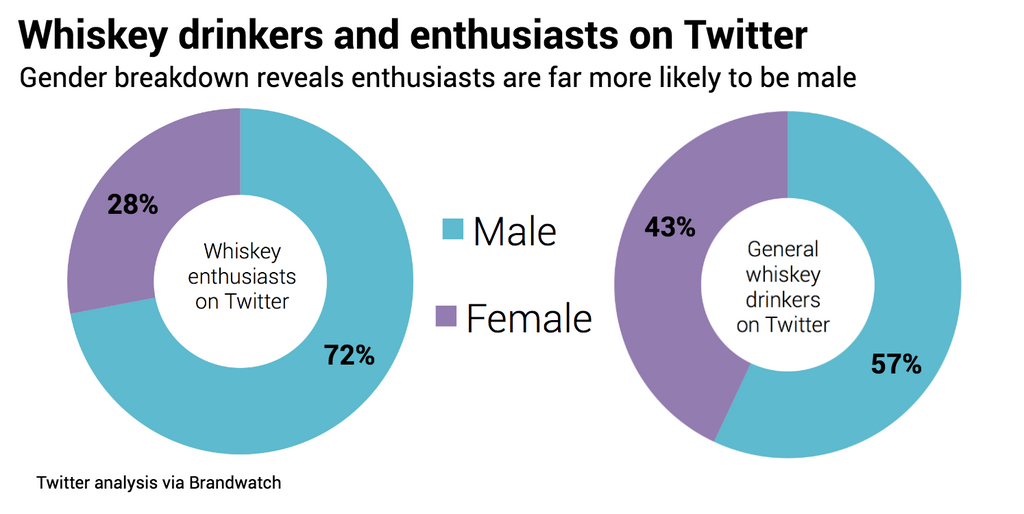 Things get more interesting when you look at what they actually tweet about.

Both groups saw a predictably huge spike in conversation on EU Referendum day, but the content of their tweets were quite different.

Throughout the period in which we measured the tweets, whiskey enthusiasts proved themselves to be more politically engaged (the words “Labour”, “junior doctors”, “Cameron” and “Jeremy Hunt”, all associated with British politics during the period, were fairly common in their tweets). The enthusiasts were also more likely to discuss the leave campaign while the general whiskey drinkers were more likely to discuss remaining.

The data definitely suggests a political divide between the two sets of authors.

The general whiskey drinkers discussed Christmas and were more likely to share competitions, suggesting competition-based and seasonal marketing campaigns could be successful amongst the group.

Meanwhile, when looking at the interests of the different authors we found that enthusiasts were more interested in sports and standard drinkers showed a stronger preference towards music – definitely a good thing to note when selecting brand advocates.

As we’ve seen, there’s far more to the conversation than surface-level mention spikes.

A deep dive into the slightly tipsy social data can unravel interesting insights that can be capitalized on by smart marketers in the whiskey industry.

Jack Daniel may not have known what a tweet was, but he’d probably be pleased to know that “bottle of Jack Daniels” is a very popular term on social media around Christmas thousands of miles from where the story began.

If you’re a Brandwatch customer you can explore the data in more detail in Insights Central.