Will the “Stop Funding Hate” Campaign Have a Lasting Effect on the News Media?

The Brandwatch team takes a look at the "Stop Funding Hate" campaign as it takes off on Facebook, and investigate how damaging it might be for publishers.

Newspaper advertising may already be struggling but a new campaign could see it plummet further.

The last few days have seen a debate open up about the conflict between a brand’s self-purported values and those of the publications they choose to advertise in.

It turns out that many customers aren’t happy that their favorite brands are pumping money into what they see as unsavoury news outlets to reach big audiences with their products.

It’s by no means a new concern but it’s one that has been highlighted by a new campaign that’s proving a big hit on Facebook.

“Drip by drip our society is being poisoned with headlines selling hatred,” says the Stop Funding Hate Campaign that is calling for large brands to pull their advertising from certain publications in the UK. Its campaign video, which has 3 million views at the time of writing, launched this week and garnered over 98k shares as well as attracting 50k page likes.

They have one aim: “To build an effective, well-targeted campaign that will convince advertisers to pull their support from the Daily Mail, Sun [sic] and Daily Express.”

For readers unfamiliar with these publications, they’re three of the most popular papers in the UK that often come under heavy fire for their headlines, with recent coverage of the EU Referendum and the refugee crisis of particular concern to the Stop Funding Hate campaign.

The first round of campaigning targets Virgin Media, and it’s been pretty successful as a launch. @VirginMedia are the top mentioned Twitter handle in the conversation with @RichardBranson coming in second.

Its success has spread across platforms too, with the hashtag #stopfundinghate generating 500k impressions on Twitter. 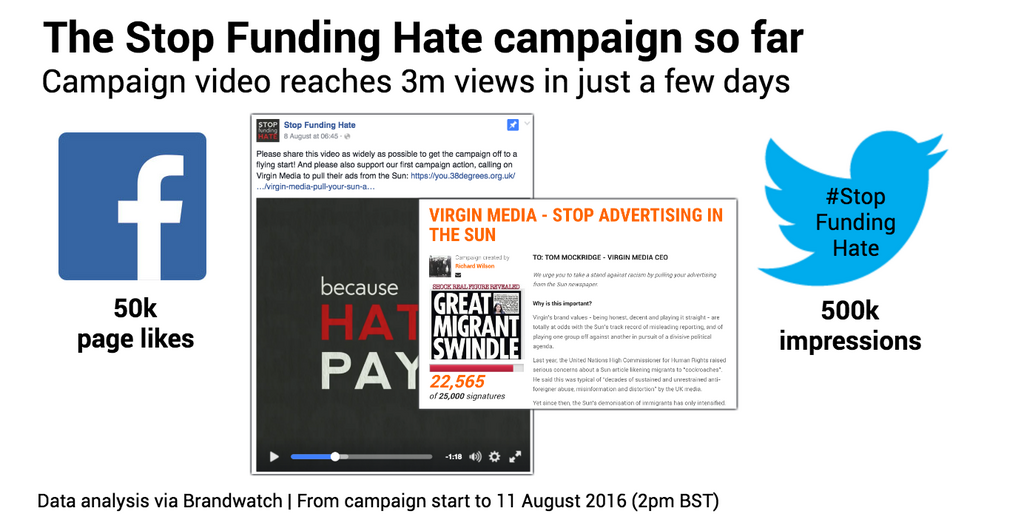 One of the key arguments put forward in the campaign video is that advertisers care a lot about what people think of them.

The campaign hopes that by making it clear people don’t appreciate brands selling their products alongside hateful headlines, and capitalising on the sensationalism, it will force advertisers to pull advertising, thereby discouraging the papers continuing this style.

It’s arguing that a brand advertising within newspapers that splash hate-driven headlines on the front page not only fuels the hatred but gives the brand unwanted negative associations that social activism will highlight.

It presents a difficult problem. Brands might not want their non-tabloid reading customers to be angry at them for advertising in these titles but they’re also very interested in getting their products and services in front of the thousands of readers the publications give them access to.

Perhaps it’s worth contrasting the three papers in question with two very different (and generally more left leaning) UK based news outlets, The Guardian and The Independent. 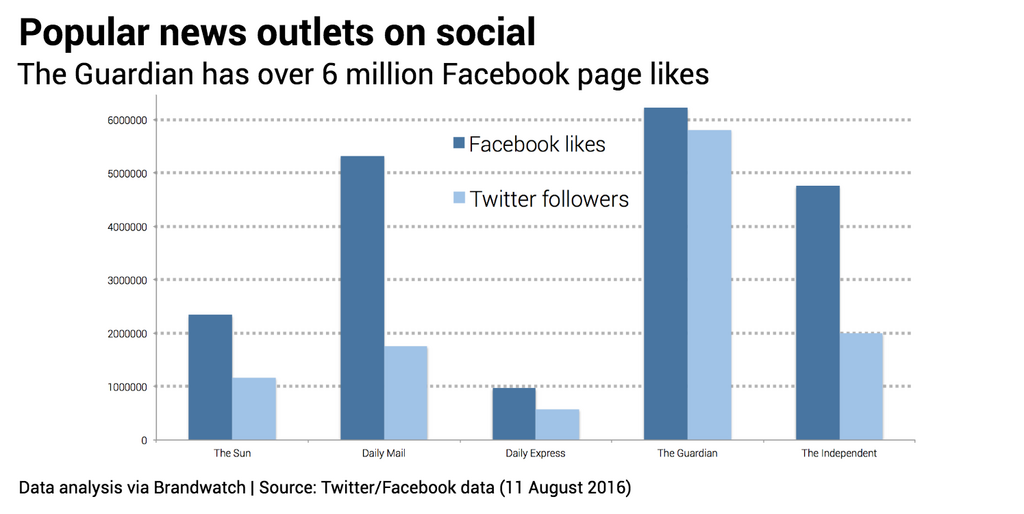 Between them, The Guardian and The Independent have 2 million more Facebook page likes than the three target news outlets put together. If Facebook is the left-wing echo chamber many perceive it to be, it’s easy to see how the campaign has taken off on the platform.

No matter how many people sign the petition, the targeted papers’ vast loyal readerships could be difficult to access elsewhere, which will likely prove too alluring for brands to abandon their current advertising strategies.

John Oliver’s takedown of journalism, highlighting the effect of readers’ preferences for getting their news for free online on the printed newspaper industry, put poor quality journalism into the spotlight this week.

Declining journalist numbers, put down to budget cuts and strategies that aim to give readers “what they want” (trivial content like cute cats that drive clicks) are seen as part of this change.

That’s not to say that the publications in question are desperately pumping out sloppy but sensational headlines on refugees just because of the current industry climate. From “Gotcha” to “The Truth” the Sun has a long history of controversial front pages while being a hugely financially successful paper.

However, with audiences moving online print advertising has begun to flail. If big brands begin to pull adverts it could be yet another dagger in the side of an outdated industry already on its knees.

What the campaign has successfully done is to draw attention to the fact that advertisers don’t seem to care if the contents of the front page might be counter to the values a brand claims to have at its core, and people are definitely getting riled up by it.

Are you a journalist looking to cover our data? Email us [email protected] for more information