Data Reveals The Worst Days of 2016

The Brandwatch React team looks to the social data to determine which were the worst days of 2016 according to tweeters. Enjoy...

In the US half the country is reeling after an exhausting election cycle and contemplating the possibility of Kanye vs Biden 2020. For Brits, the Freddo has gone up and the pound has gone down.

The world is basically in meltdown.

Calculating the worst days of the year 2016

You’ll find countless articles on the “worst moments of 2016” online, but calculating the worst day of the year needs a smarter approach than sending this week’s intern down a Google rabbit hole. They won’t be able to report, for example, that the worst day of the week in 2016 has been Thursday. 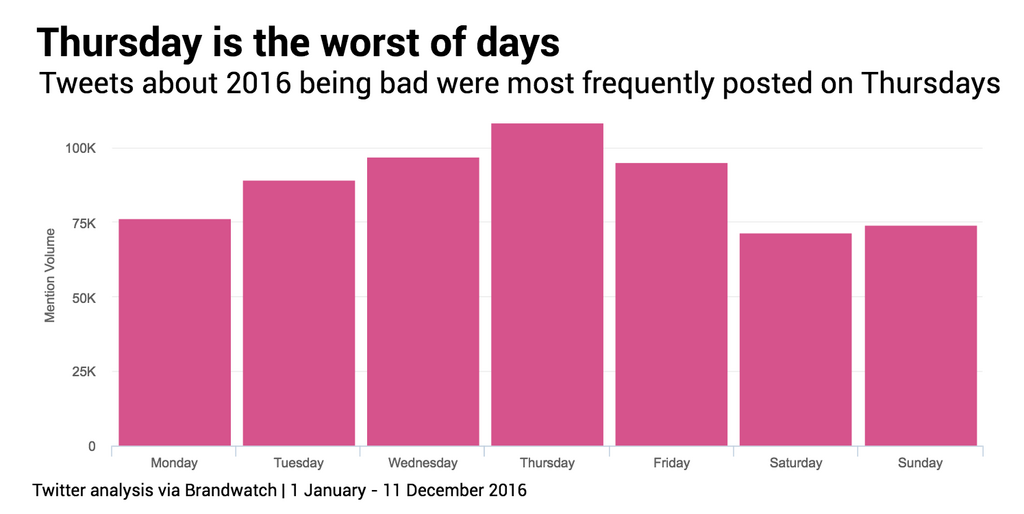 The best way (the Brandwatch React way) to find the worst day is to take a look at a whole host of English-speaking expletives and sad words mentioned in conjunction with “this year” or “2016” over the course of the year to discover where the spikes lay.

Unsurprisingly, mentions of 2016 being awful grew steadily throughout the year as the horrific events piled up.

Towards the end of the year, talking about 2016 became like a tedious car game of “I packed my bag”. If 2016 is a bag it’s full of something stinky.

2016 didn’t necessarily have the best start. A spike of 3,687 “sad tweets” on January 1st kicked the year off in a suitably depressing way.

15th January saw a second spike (of around 3,530 tweets). This is when the cold realization that this was going to be a bad year began to set in.

Things stayed fairly quiet until April when Lauren Cruz tweeted about a series of events that (depending on your outlook) could be considered bad.

Fast forward to June and England was having (in the eyes of vote-remainers and football fans) a pretty bad time.

Following on from that 8th July saw the British pound become the worst performing currency of 2016.

Mid-August saw a boost in sad tweets as this tweet, which fairly clumsily details the story of a French Olympian getting booed in Rio, gained attention.

21st September saw this tweet about protests in Charlotte turning violent this year:

In many ways, the further into the year, the more indecipherable the subject of tweets got using automatic methods. There was just so much bad.

The subject on the 8th and 9th of November wasn’t up for dispute, however. Between them, we tracked over 47k tweets talking negatively about the year and most of them had a little something to do with it being Election Day.

Weirdly enough, the 24th of November saw spike in sad 2016 mentions that went higher than election day itself, driven primarily by this tweet:

Mr. Peanut is dabbing at the Thanksgiving Day Parade I hate 2016 pic.twitter.com/AXSpqYrFqc

However, the worst day of the year came on the 13th of December. 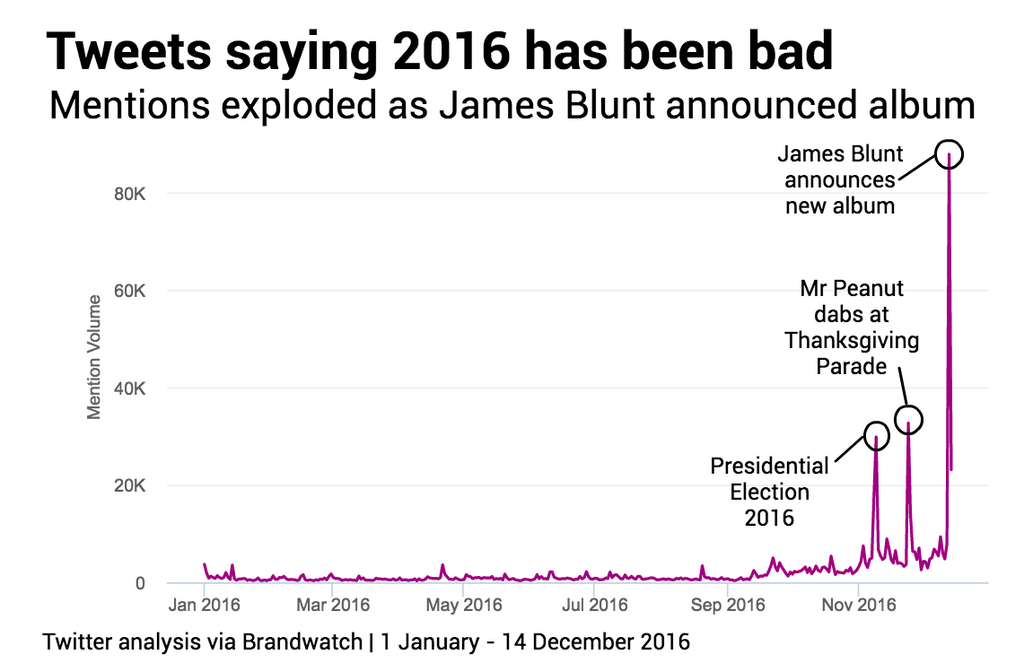 You’ve got to love the internet.