The Brandwatch React team focuses on the different groups of people talking about Brexit online and what we can learn from them. This time, young people.

Welcome to the first in a series of Brexit-related posts about how different groups are discussing the issues surrounding Brexit online.

We’ll be bringing together the results of long-running research we’ve been doing surrounding the Brexit result and ongoing situation, tracking how a deeply divided conversation has moved over time.

This time the Brandwatch React team set out to find out what young people arewe a saying about Brexit.

The result of the EU Referendum cracked open gaping divides in political stances, but the division doesn’t stop there.

According to voting data, age played a huge part in how a person would vote. While young people were most likely to vote remain, the older the voter the more inclined they were towards leaving the EU. 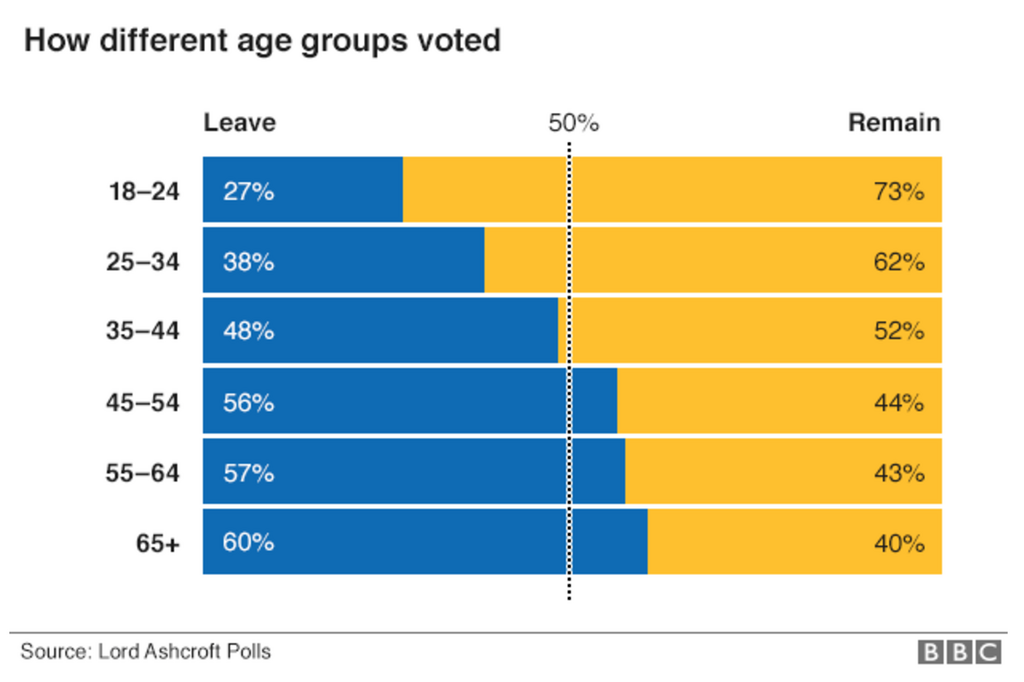 There are plenty of unhappy voices in the overall conversation, and given that young people are going to be the ones dealing with the bulk of the fallout, getting to know how they feel moving forwards is a valuable exercise.

Breaking down social media conversations by age isn’t something the Brandwatch Analytics platform can do automatically, but there are a number of ways to get around that.

For this research, we used Brandwatch Audiences to find self-identifying young people who had discussed Brexit in the last few months. We included 16-25-year-olds as well as those who identified as a student (but not a PhD or mature student) based in the UK. Once we had a list of authors (around 900), we imported them into queries in Brandwatch Analytics and were able to analyze their Brexit-related tweets.

If you’re interested in learning more about breaking down social data by age you’ll hopefully find the below article interesting.

First of all, we looked at the reaction to the EU Referendum result. It’s important to point out that not all of the young people in our data were pro-remain, but the following were common themes we found in their tweets overall.

Young people who weren’t fans of the result displayed a lot of anger towards the older generations who voted leave.

When you voted to leave the EU but you gunna die soon so it's not your problem…. Typical voter for a #brexit.. ??? pic.twitter.com/qJ5HXh12wo

We found a number of tweets talking about the decisions of parents and grandparents in less-than-impressed words, illustrating the many family divides the EU Referendum caused.

Debating the EU referendum result with my step dad. I need more wine.

My parents both voted leave; they have a few more years until they retire. Me? I have student debt that will soar with the inevitable >

GIFs and memes mocking the result were rife across the internet, but they were particularly strong in the young people’s conversation.

The falling pound was the subject of a lot of ridicule.

leave the EU, they said

our economy will be fine, they said pic.twitter.com/t2Nrdr8nT4

One of the most prominent links in their conversation on result day was this petition calling for another referendum. It garnered an impressive number of signatures, but it’s not going to happen. 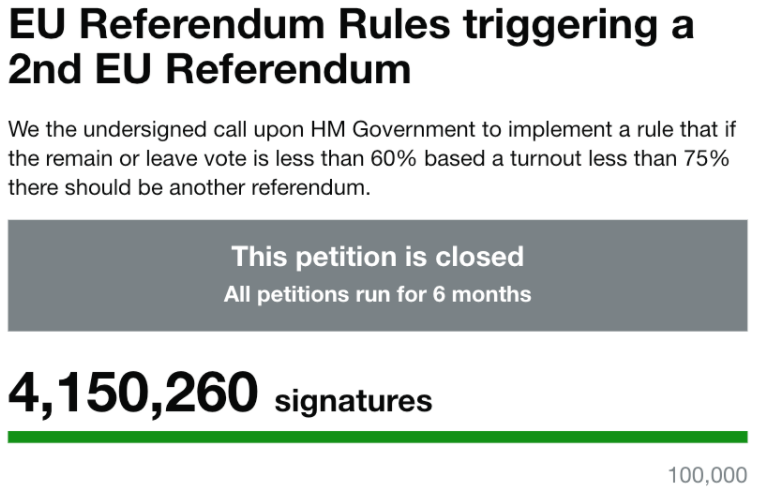 The popularity of @BritishLogic’s tweet demonstrating the inconsistency of promises surrounding the leave campaign amongst young people was telling.

We’ll be covering “post-truth” politics in a later post, but the reaction of young people to Brexit pledges is really interesting. British youths are no stranger to broken promises – take the Liberal Democrats’ broken promise not to raise university tuition fees as an example.

As a group, the young people had a higher percentage of tweets talking about broken promises after the EU Referendum result than the wider population’s Brexit conversation.

One positive movement which came out of a fairly depressing situation for young remainers was the “We Are Undivided” campaign which seeks to unite young people from across the political spectrum in order to fight for the best possible deal.

Whether you voted #Leave, #Remain or didn’t vote at all – we want to hear what #Brexit looks like to YOU: https://t.co/rk3QjwhSKK #WeDemand pic.twitter.com/7PCIkjlwdK

The campaign got an impressive amount of press coverage and we have tracked around 16k social media posts surrounding it between 1st June 2016 and February 19th 2017.

We Are Undivided is gathering demands from young people to present to Parliament. It gives a voice to those of voting age as well as those who weren’t old enough to cast their vote last June, and so far over 260,000 votes have been cast on their site.

So far in 2017, spikes in conversation from young people came (predictably) during Theresa May’s speech (17th January) and the day the Supreme Court ruled that Parliament must give Article 50 the go-ahead (24th January). In the latter case Gina Miller, a prominent campaigner, was a huge topic.

Generally speaking, we found that young people are more likely to have personal names as prominent topics in their conversations as opposed to names of events or parties or rulings, which are more common in the general population of Brexit Twitter conversation. 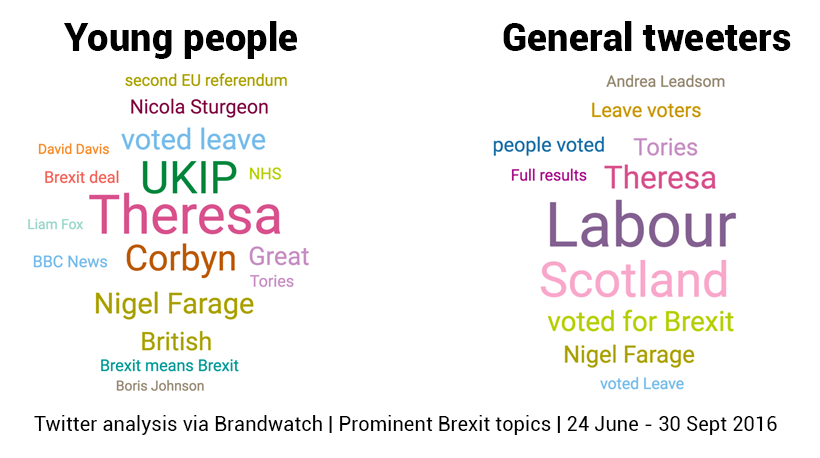 Looking at the data so far in 2017, there doesn’t appear to be much consensus. Links favoring all manner of political figures and stances are shared in the conversation. The We Are Undivided campaign has a big job to do in bridging those divides, but the success they’ve had so far is encouraging.

We’ll continue to track these conversations to see how they progress as the Brexit situation develops.