In this enlightening free report, the online presence of 49 public sector agencies are analyzed and compared to discover how they fare on social media.

“It is rather for us to be here, dedicated to the great task remaining before us…that government of the people, by the people, for the people, shall not perish from the earth.” – Abraham Lincoln.

In a two-minute address in Gettysburg, Lincoln proclaimed to his nation a radical idea: that a government committed to hearing and responding to the voices of all its people was worth fighting for.

Here we stand a century and a half later, with millions of people across the globe expressing their feelings about every facet of their government, responding to every action their leaders make, and participating in global conversations unlike any other time in history.

The internet, and social media in particular, has the world engaged in civics and policy.

With political conversations awoken in every corner of the globe, the public sector is truly at a pivotal time in its relationship with its people.

Social media data is rich with honest insights about the health of government organizations’ relationships with their audiences, information that would otherwise remain unknown.

Using social data, agencies can manage their image among their constituents, acknowledge and respond to viral political movements, and diagnose breaking crises before they become insurmountable.

But, how good are current government agencies truly at using social media to be of, by, and for the people?

Which agencies excel at using social to communicate with their audiences? Where does the sector as a whole fall short of Lincoln’s vision?

In our latest report, Social insights on the Public Sector, the online presence of 49 public sector agencies are analyzed and compared, and the public sector social conversation is investigated to answer these and other pertinent questions.

A Conversation of the People: Citizens dominate the political conversation

In this report, we examine the online activity of the public sector to illustrate the current state of social and political conversations surrounding US, UK, EU and international agencies.

In the following figure, taken from the report, a broad picture of the relationships between agencies and their audiences is illustrated.

We find that the conversation on social media is primarily coming from non-agency individuals and accounts. 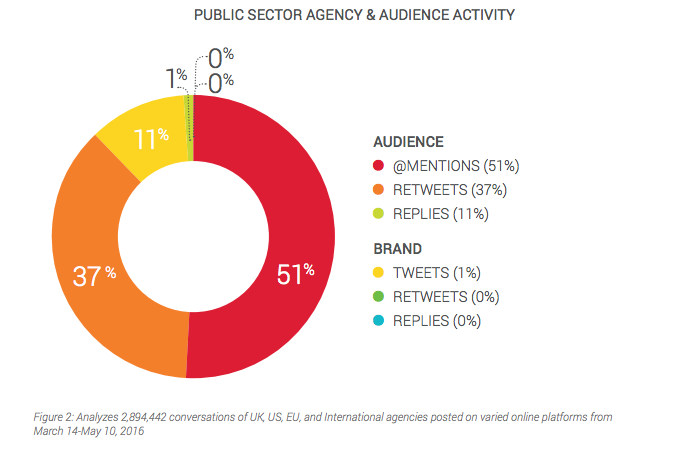 Across all regions analyzed, public sector authors made up less than 2% of all mentions of government agencies.

Some agencies, like NASA in the US and the Ministry of Defence in the UK, are more successful in social engagement than the rest of the sector, securing the leading place for their respective regions in our Public Sector Social Index.

However, as the whole, public sector agencies are not keeping up with the extensive conversations that surround them, with only 41 of the conversation’s 5,200 tweets each day coming from agency channels.

The public sector is not the only industry with a low percentage of owned conversations.

However, unlike the private sector industries we’ve examined, these conversations do not only describe comments constituents have about public sector agencies.

Embedded in these conversations are issues and topics that affect people’s livelihoods, including the status of their health care during policy changes, their safety during national disasters, and the power of their voice in elections.

Social media is integral to modern-day political discourse, and it is vital that government agencies are engaged in the space where the conversations pertinent to them and their constituents are taking place.

Issues by the People: The important topics in the 2016 US presidential election

Regardless of industry, important events will trigger increases in the public’s social media activity and will dictate and direct the larger conversation.

The debates, primaries, and speeches involved in the US presidential election this year was one such example, prompting millions of people to join the online political conversations.

In the context of the discussions surrounding four of the major candidates, our analyses revealed the most recurring political issues concerning Americans.

In the map below, the most discussed issues in each state are shown. 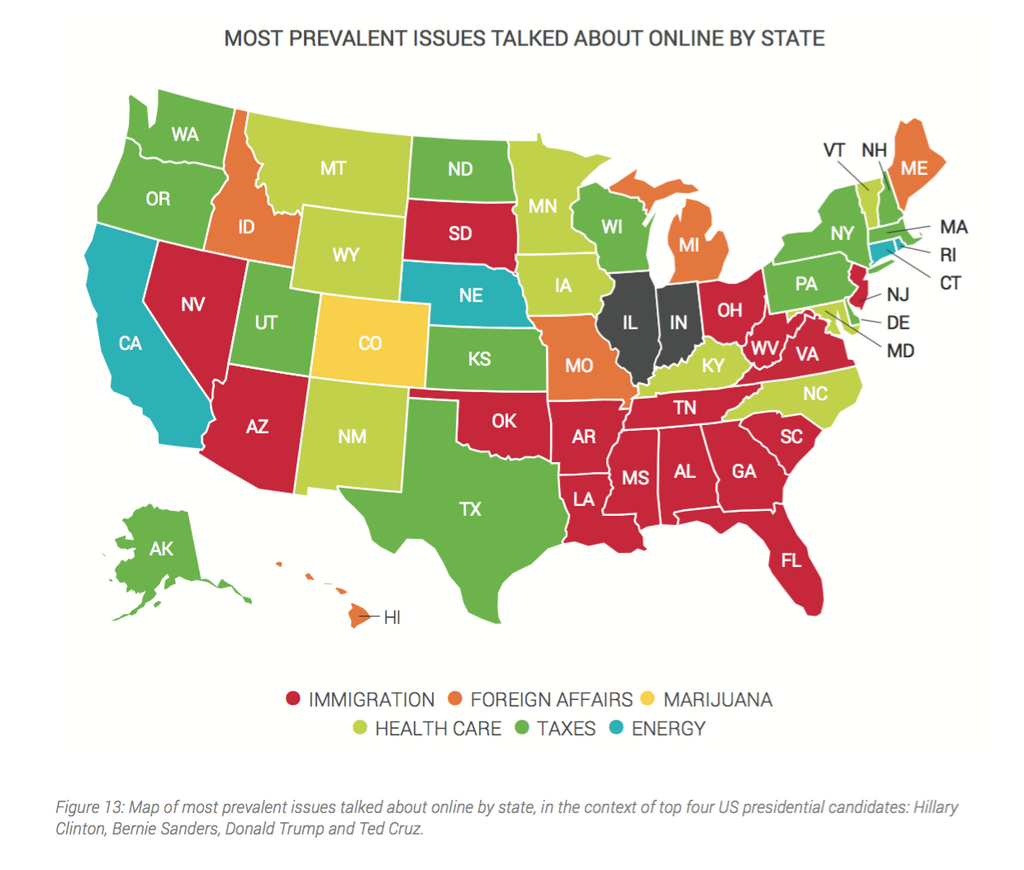 Data for map powered by Brandwatch.

The information acquired from this analysis not only revealed geographic trends in discussion of social issues, but also told the story of which issues are more politically polarizing, and the demographic differences that make up the voices of each issue.

The best way an agency can understand what problems and topics concern their constituents is to listen the issues they speak most often about.

Analyses like this can help agencies identify which issues are most important to which constituents, and can in turn inform smarter campaigning, fundraising, policy changes and resource allocations.

A Public Sector for the People: How social data can revolutionize the public sector

Public sector agencies are at the beginning stages the social media revolution.

Only five of the 49 big agencies we analyzed did not have both a Facebook and Twitter channel. Further, agencies are increasingly being pressed to use social media to provide up-to-date information on breaking stories or current events.

However, simply posting on social media without listening and responding to audience-driven discussions does a disservice to the millions of people in these conversations.

Measuring the sentiment of a demographic can provide immediate feedback on.

Additionally, the intelligence acquired from social media data can inform all types of decision-making, from the prototyping of policies to the distribution of campaign funds.

The power of social intelligence in the public sector is limitless.