Research: Analyzing the Twitter Buzz of TV Shows on Gambling

Having been in the iGaming and bookmaking industry myself for over ten years, I couldn’t help myself in doing some research into the Twitter buzz surrounding the series ‘Britain at the Bookies’ that recently aired on UK television network the BBC.

The TV show followed sportsbook workers and head office employees tasked with turning around the fortunes of their branches.

Gambling is obviously a contentious subject – so how did it land with TV audiences on social?

From anger at the prevalence of betting shop roulette machines – Fixed Odds Betting Terminals (FOBTs) – to the issues the audience had with the exposure a gambling company was getting on free-to-air TV, here is the breakdown of how the viewership reacted.

What could TV networks learn about how their content is being perceived from social media? Quite a lot.

The final episode of the series provoked many reactions, much criticism and some praise from those watching along at home.

Many of you will know that the bulk of the reactions were negative towards the bookmaker featured, Coral, and the industry, but the breakdown of the data revealed some other interesting insights.

For example, journalists were the most represented profession among those tweeting about the show.

The first episode aired on 20th July and saw just over 1,100 tweets attributed to it, while the second and third episodes got 2,700 and 2,400 tweets respectively. 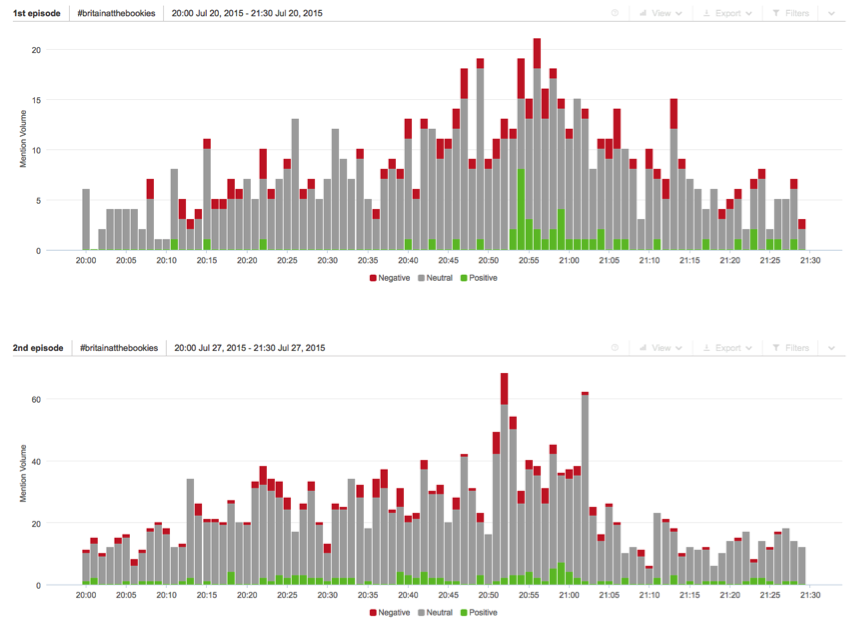 Tweets in-between broadcasts were a mix of people watching the replay, and tweets from charities raising awareness of problem gambling.

Over the 17 days that we gathered Twitter data, 87% of the tweets were neutral, but 8% of them were negative (against 5% positive) and contained emotionally charged language, reflecting viewers’ immediate responses to what they were watching. 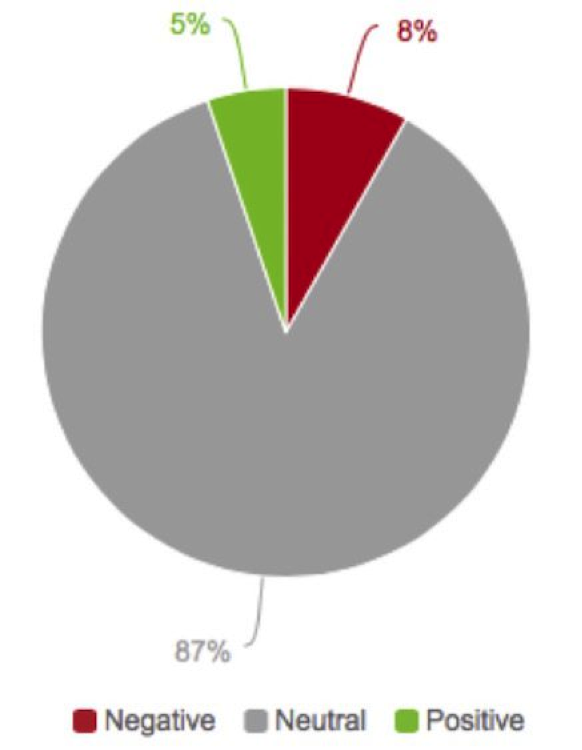 The 8% represents almost 700 tweets, most of them referred to problem gambling:

Many similar tweets were posted from bodies like @TheGraspGroup, a charity set up to raise awareness of problem gambling. 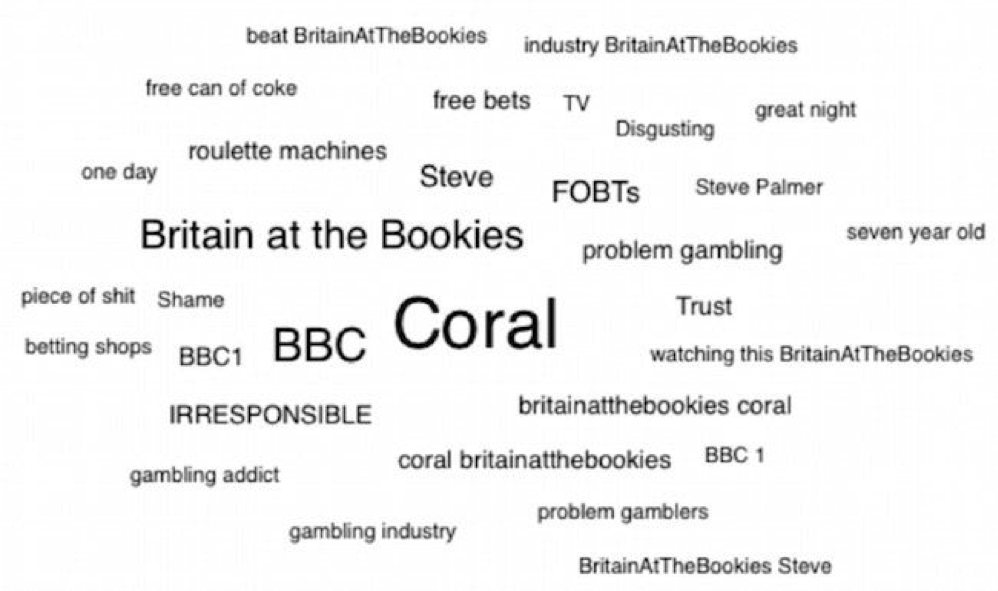 As expected, Coral took some heavy criticism from viewers. 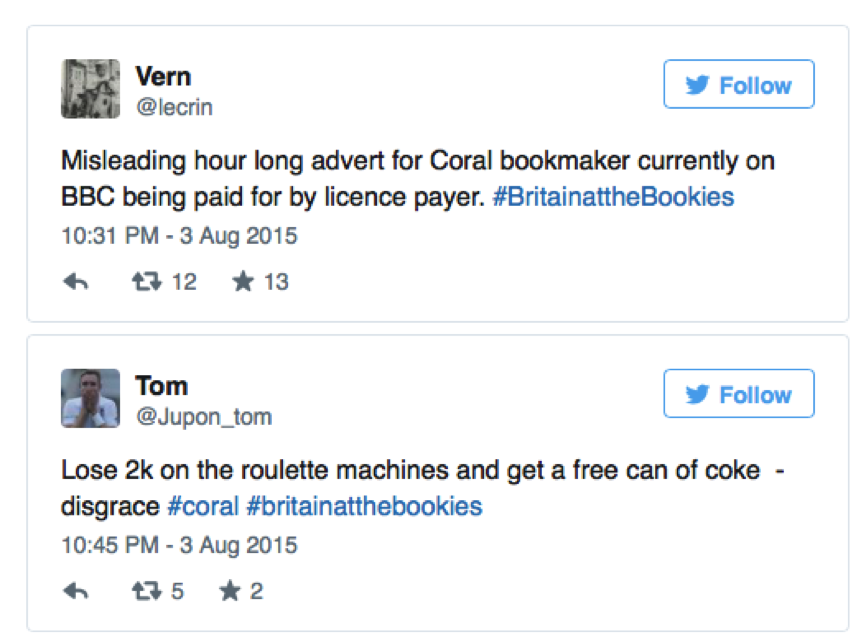 Since the show featured Coral it was no surprise that tweets including mentions of specific bookmakers saw Coral dominate the share-of-voice compared to its main competitors Betfair, Betfred, Ladbrokes, Paddy Power and William Hill. 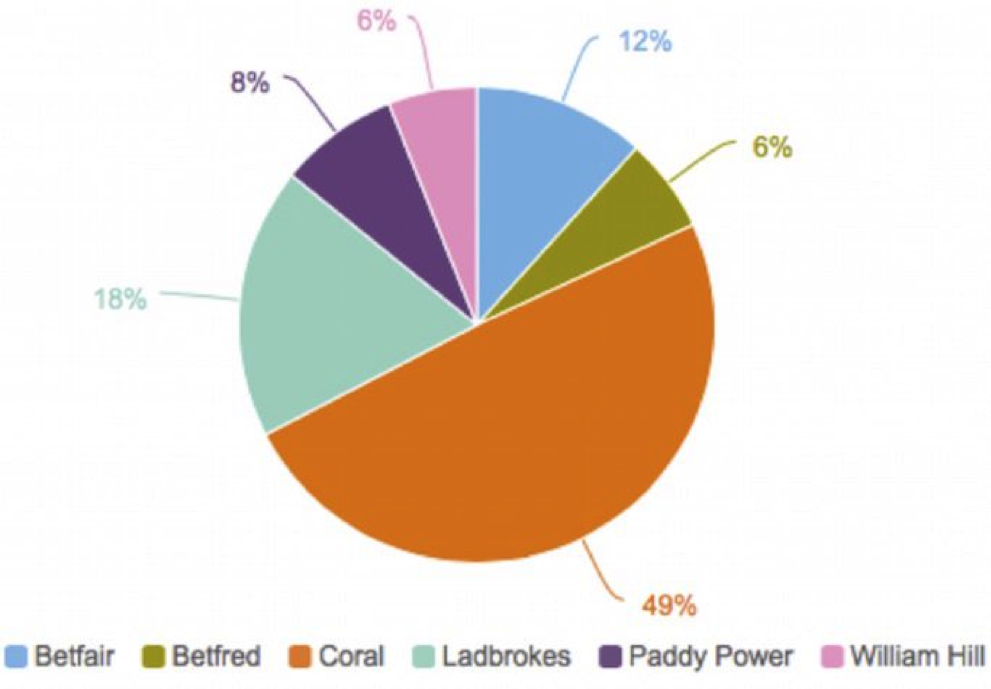 Where demographic Twitter data was available we managed to identify sports, cars and family as the top interests by the people tweeting about the show.

Looking at their Twitter biographies, we can see that journalists, artists and company executives were over-represented, closely followed by people involved in sports, sales, marketing and public relations.

Clearly, networks face an imperative to identify, analyze and understand the social dialogue shaping the way their businesses and content are perceived.

Download the free Brandwatch Social Insights on the Television Network Industry report to find out: