Unveils some findings from Brandwatch's report: Social Insights on the Luxury Fashion Industry

On August 28th, 2015, Justin Bieber released the much anticipated “What Do You Mean?” Whether you beliebe in his music or not, one thing is certain: the social media campaign supporting the release was impressive.

As of now, the music video has over 100 million views – at around 5 minutes long, that roughly translates to over 950 years of time spent watching the video. Apparently, 950 years was enough time to successfully identify his Calvin Klein underwear.

Naturally, the video caused an uproar on social and Calvin Klein’s risque appearance was mentioned over 87,000 times on Twitter. While in the grand scheme of Calvin Klein’s business it may be hard to measure exactly how much the video and 87,000 tweets affected their actual sales, it undoubtedly has.

Celebrities are famous for flaunting their luxury fashion products. And yet while their fans and followers are constantly turning to social media to discuss their favorite icon’s clothing choices, luxury fashion brands are too often silent on those channels.

For example, in our latest report, Social Insights on the Luxury Fashion Industry, brands owned activity only accounted for .37% of the conversation. The general public owned the remaining 99.63%. 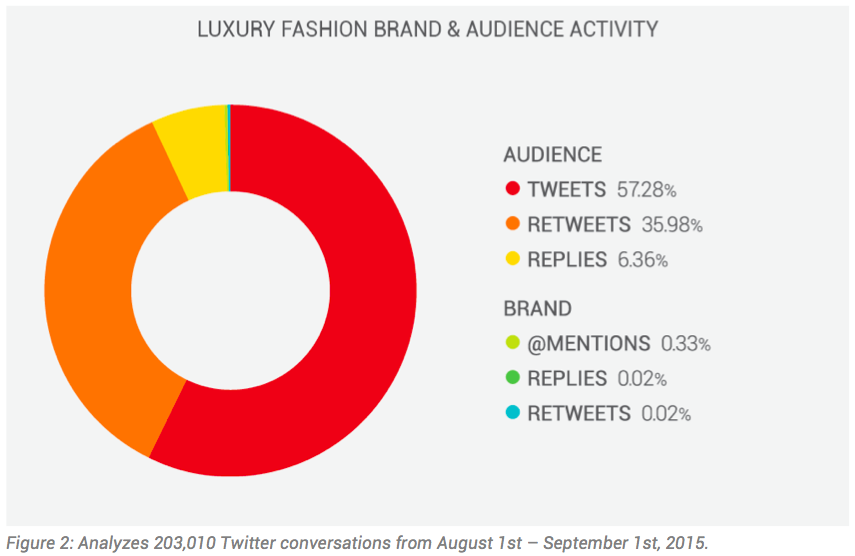 Clearly, social media has marked a change for many luxury fashion brands. Yet while the public may dominate most of the discussion online, businesses still have an immense opportunity to influence the 99.63% of conversation that doesn’t come from their own channels.

Consider the Justin Bieber story. Now consider that in an analysis of clothing items mentioned in relation to 32 leading luxury fashion brands, underwear constituted 27.01% of the conversation, just below dresses. 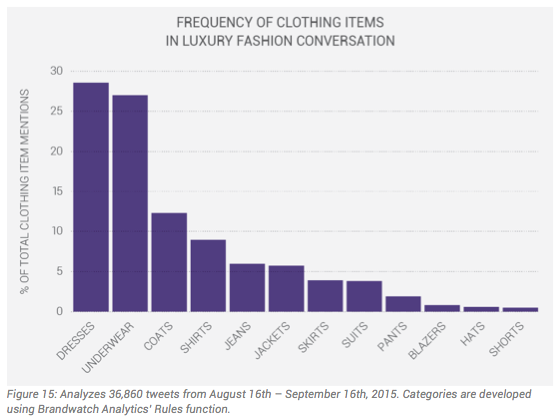 In fact, underwear constituted 48.34% of the Calvin Klein clothing items mentioned in that time period.

Celebrity campaigns seem to be a leading strategy for luxury fashion brands for good reason. Social analysis reveals that these campaigns are successfully reaching specific demographics.

The figure below examines the interests of Twitter users discussing luxury fashion brands. 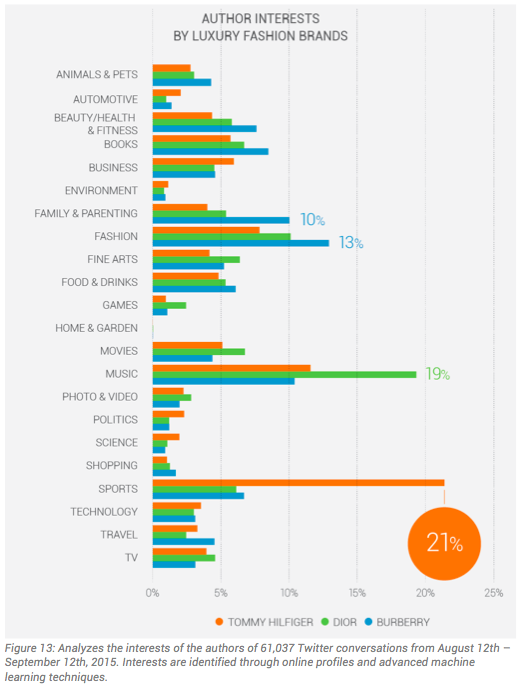 While Dior’s Music following is driven by Rihanna’s support, Sports fans are drawn to Tommy Hilfiger’s connection with Rafael Nadal. Clearly, those campaigns are generating favor from celebrity support.

While celebrities have a powerful affect on the conversations surrounding luxury fashion brands, they are not the only ones. Everyday consumers are constantly taking to social media to review and discuss brands’ products.

Social media intelligence allows businesses to listen, understand and adapt their products and content according to their consumers’ expressed needs and interests.