It’s just one little word, but the past few years have seen a booming industry evolve around the concept of influence.

Popular companies like PeerIndex and Klout have focused their energies on quantifying individuals’ perceived influence, breaking it down into sub-categories like authority and reach.

Although it’s been over two years since the launch of these influence aggregators, we’re barely any closer to having a consensus on how to measure it. 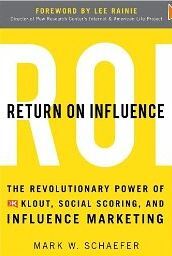 Brandwatch has partnered with Bloom Worldwide to co-host an event on the 19th of April, which aims to address some of these issues.

Fresh from the release of his latest book, ‘Return on Influence’, the influential (!) Mark Schaefer is scheduled to deliver the event’s keynote, where he will discuss topics such as:

Following Schaefer’s talk, there will be a panel discussion to further elaborate upon some of the themes he presents. The panel will consist of the following:

Tweeters can engage with the panel discussion as the event unfolds by using the #bloomROI hashtag, granting both audience members and distant observers the opportunity to pose questions to the panel as they tackle the issues surrounding influence.

You can buy tickets for the event here, which is held at the following: