Recently, Brandwatch was listed among Crain’s 100 Best Places to Work in New York City. Spend one day in the office and it’s easy to understand why ...

Recently, Brandwatch was listed among Crain’s 100 Best Places to Work in New York City. Spend one day in the office and it’s easy to understand why – employees have ownership of their work, there’s a friendly environment, we host ping-pong tournaments and we are constantly encouraged to pursue creative ideas.

However, one of the perks we often take for granted is the opportunity to explore the Brandwatch Analytics platform.

Okay, perhaps the prospect of crunching social data is not as tantalizing to some as the promise of a warm Murray’s bagel every Friday.

Still, the platform presents stories and information in ways that a Google search or Wikipedia page does not.

The information from social media isn’t curated by any algorithms and isn’t narrated by a few select authors. Rather, as social data is comprised of public online conversation, the information is the sum of all the events, discussions and ideas that the greater public finds important enough to express online.

To understand that concept, let’s take a look at the #BringBackOurGirls campaign.

One of the greatest aspects of the platform is its ability to convey the entire story behind a trend or social event.

In the case of #BringBackOurGirls, a simple query was able to reveal how the hashtag started, developed and reached capacity on Twitter. Take a look at the figure below: 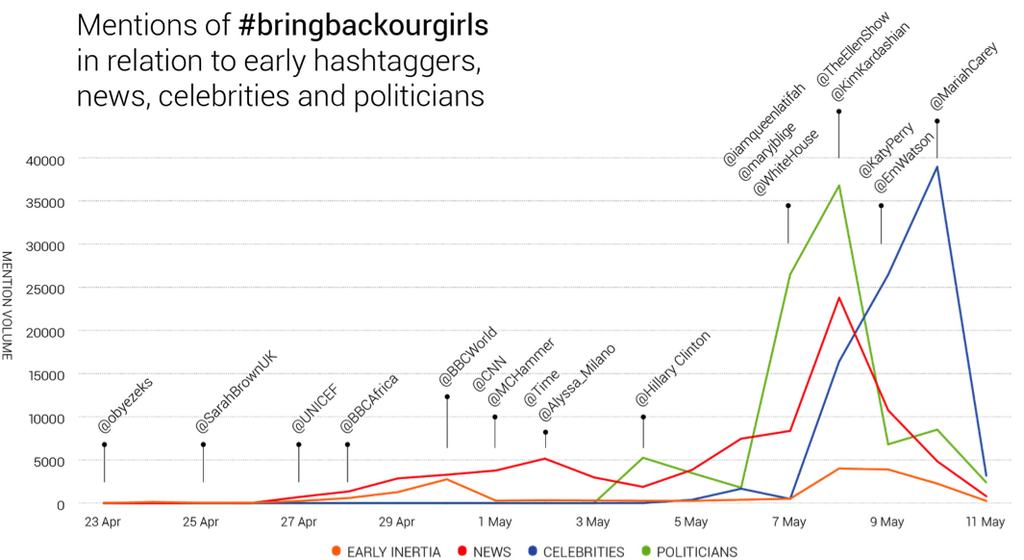 Notice that first dot there from @obyezeks on April 23rd?

That marks the first tweet officially calling out for the #BringBackOurGirls campaign. Further digging reveals that the tweet from @obyezeks was actually inspired by speech from Nobel Laureate professor Wole Soyinka at UNESCO’s Port Harcourt World Book Capital in Nigeria that day.

Within a few weeks after that you can see the first news outlets and reporters starting to catch wind of the issue and bring serious momentum behind #BringBackOurGirls.

Zoom out fully and its clearly apparent how the hashtag changed hands from the early proponents to news outlets, politicians and finally celebrities.

Through this storyline analysis, it’s easier to understand just how #BringBackOurGirls developed from a speech at a Nigerian book conference into an international statement coming from both important political figures and biggest celebrities.

A similar storyline analysis can be applied to any topic of interest.

If I want to learn what has happened with the US Federal Reserve’s bond tapering program over the past six months (don’t ask why), a quick query can reveal each important public milestone or event.

Each of the short upshots above represents a peak in conversation – a day or two where the portion of the online community that stays cognizant of the Fed’s activity decided that there was something important to discuss around the bond tapering program.

In a sense, each mention can be considered a single vote and the size of the peak is representative of how important the community voted the discussions were on that day.

Clicking through to any of those upshots, you can instantly see the important events, news stories or conversations surrounding Fed bond tapering at that point.

The internet, obviously containing massive amounts of information, has systems in place, such as search engines like Google, to curate and make sense of it all.

In the digital age, search engines and internet curators, governed by algorithms or independent authorities, determine what we read and how we process information online.

Social listening presents a new way to curate information, one that is solely governed by the opinions of the general public.

As an employee allowed to roam the platform freely, it is fascinating to have another way to uncover information online and to learn from the opinions and resources expressed on social media.