The tightness of this presidential election has endowed pollsters with an amount of responsibility unseen since the 2000 poll.

The decisive fluency of Mitt Romney in the first debate arrested the almost processional Democratic ticket and dragged doubt into the equation.

The reversal of fortune was so profound that lessons of Carter-Reagan in 1980 were bellowed by commentators and whispered on the sidewalks of Cleveland, Miami and Richmond.

Events of the subsequent weeks have placed a new emphasis on prediction, with financial markets, social activists and the merely curious joining candidates and staff in flocking to Real Clear Politics or the Huffington Post trackers. These providers should take advantage of every source available to full justify this investment of trust.

Despite polltakers employing a range of methods to ensure the most accurate predictions a visit to polling aggregators’ websites throws up an anomaly: the absence of social media statistics. In an age of such prolific proclamation on online platforms, traditional, mainstream, polling is missing a trick.

Conversation posted online about the candidates and with it, clear indication of voting preference, is available instantly and is readily mined by social media monitoring platforms.

The sentiment of discourse towards each candidate is sampled and classified, with similar methodology to more traditional efforts.

Discussion is subsequently monitored to uncover the geographic location of potential voters for greater insight to public opinion in even the smallest of conurbations: paramount information when polltaking this week in Ohio.

Similarly, opinion can be classified by language, a vital tool as both Republican and Democrat tickets stalk Latino approval in a number of states.

The demonstrable, and differential, edge of social media polling, however, is its unstructured nature. The solicited answers of traditional polling often go no deeper than black and white, blue and red.

Conversely, online data rapidly unearths the foundation of voting preferences due to the amount of extra information disclosed by users.

Social data is easily spliced to reveal the most salient topics and policy areas influencing voters, and, by association, the popularity of candidates on such issues.

This information revealed that voters in battleground Ohio hastily denounced comments made this week by Mitt Romney about Chrysler.

Accordingly, we know that a perceived lack of information given by the President about the recent Benghazi attacks has significantly benefitted Republicans in Florida.

The origin of opinion can also be uncovered: does a comment originate in the mainstream media and echo among online users, or vice versa?

These findings are certainly more important to measuring the course of an election than summaries of a wide-ranging election into one or two percentage points.

Adding to the efficacy of social media polling is the continual shift of online platforms to the mainstream.

Twitter, for example, is no longer the exclusive domain of the stereotypically liberal or the traditionally educated.

Analysis of Republican primary and national election social media data in 2012 has revealed strong representation across the social and political spectrum in the US.

If bias exists, the margin of error does not outweigh similar deficiencies of traditional methods. Phone polling during the working day, for example, unfairly endows the thoughts of those with a landline, the unemployed and stay-at-home parents.

‘Robo-calling’ cellphones is against federal law, undoubtedly skewing results against an estimated 30% of Americans.

There is also the clear emphasis of pollsters on newsworthy content, above all.

Social media polling is no more reliable than traditional opinion taking, but it is also no less useful. An interdependent data set comprising both sources is needed for greater accuracy.

Similarly, the conventional attitude that online users flip-flop on opinions, that thought expressed online are no indication of voter intention, has parallels offline.

Individuals are capable of misguided thoughts, false conviction and outright lies when discussing an election, true, but no more on social platforms than offline.

The Bradley Effect famously displayed the propensity of the electorate to think one way and vote the other, long before social networks.

Politics and technological advancements have a renowned linkage, with each scientific leap irrecoverably changing the electoral battlefield.

Presidential debates were thrust in to the televisual age in 1960 and the Obama ticket conducted arguably the first online campaign in 2008.

Mainstream polling needs to precipitate its own realignment by according social sources equal recognition. 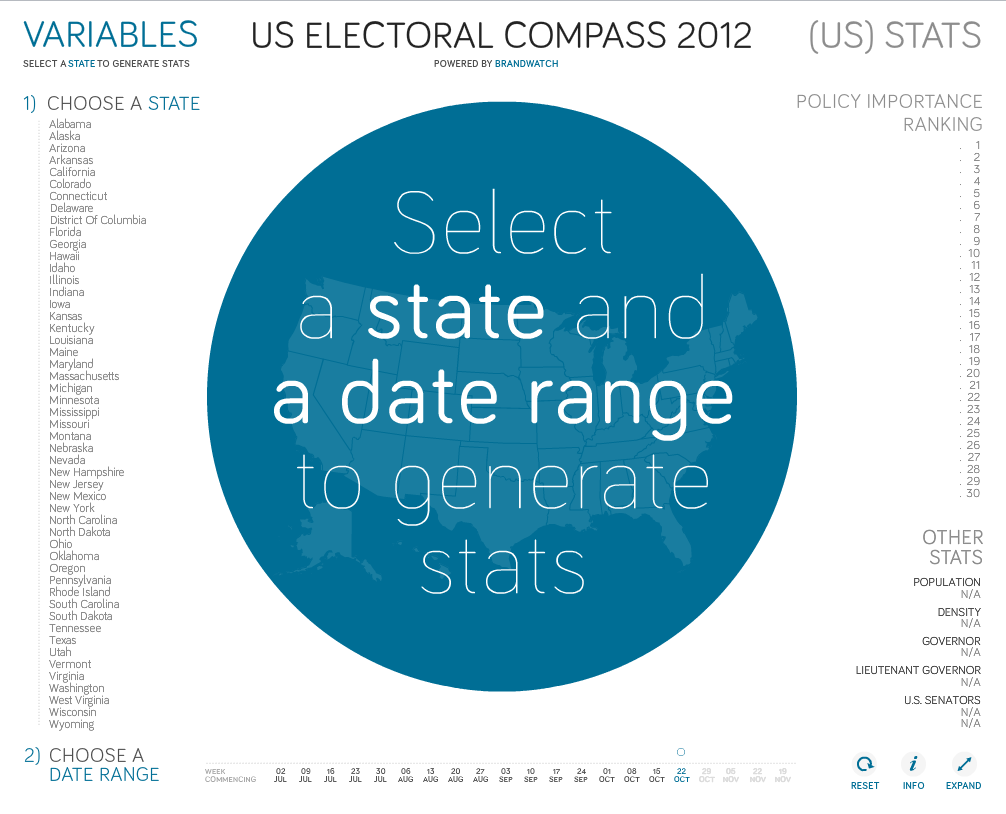 We have recently launched our US Electoral Compass . The compass shows the true thoughts of voters, revealing the electoral issues that matter and how this differs between states.

Launch the Compass by clicking here.