On Friday 29th April, Twitter was awash with chatter about all things Royal Wedding.

At Brandwatch we’ve taken a look at which attendees caused the biggest stir across Twitter and the rest of social media.

We looked at data from Friday 29th April only: we ran a broad search for any mention of the Royal Wedding on the day, including coverage of all related hash-tags. A list of over 30 names (mostly in attendance on the day) was then compiled before we checked how many times their names were mentioned within the Royal Wedding data, using Brandwatch’s ‘Recurring Phrase’ facility. Here are the results: 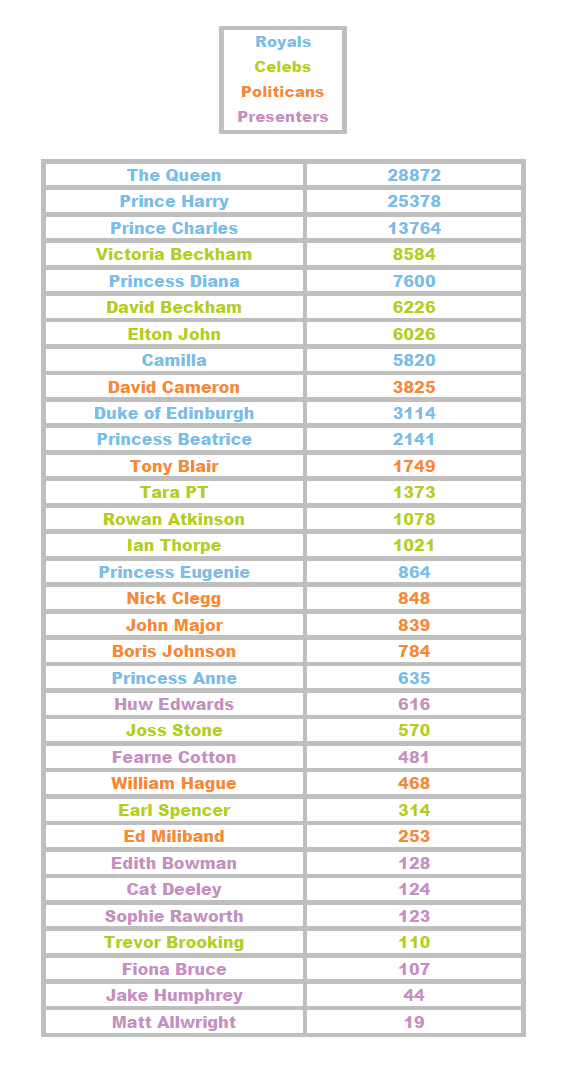 The Royal top 3 are, as many might expect, the overall top 3. The Queen heading the guestlist with the best seat in the house.

The Beckhams were the true non-Royal stars of the show with Tara Palmer-Tomkinson attracting a great deal of attention too, though perhaps not always for the right reasons…

As with the Royal Family, the head of the group takes the top spot. At second place comes Tony Blair, with a lot of people showing surprise that the former Prime Minister wasn’t invited.

Huw Edwards lead the coverage for BBC all day, backed up by a host of presenters out in the field – the most talked about of which was Fearne Cotton.

A quick look at the sentiment of the conversation surrounding the guests and it’s clear that the presenters faced the lion’s share of negativity. Perhaps the country wasn’t in total disagreement with Ann Widdecombe’s claim that the chosen presenters ‘lack gravitas’…

Princess Beatrice also earned herself a signifcantly higher portion of negative buzz than the other top guests, how much of this she can blame on her hat remains to be seen.

Keep an eye out for upcoming coverage on this week’s stories, including Brandwatch’s AV Referendum analysis.