Is it too Late for the Beverage Industry to Save Soda?

What we can learn by analyzing consumer conversations about soda, health and the Dr.Pepper-Keurig merger.

Keurig wants to serve more than just single-serve K-cups to its consumers. The coffee giant Keurig Green Mountain acquired Dr Pepper Snapple to satisfy consumers’ thirst throughout the day — be it for coffee, soda, juice or water.

Most Americans consume at least one cup of coffee every day but that’s still not enough time spent with consumers, according to Keurig Green Mountain. So with this new alliance, the merged entity Keurig Dr Pepper wants to “provide the highest-quality hot and cold beverages to satisfy every consumer throughout the day.”

But there may be a fly in the carbonated ointment — consumers have been shying away from soda for several years.

In 2016, American soda consumption dropped by 1.2 percent, falling for 12th year in a row, thanks to consumers jettisoning canisters, perhaps for more coffee. As consumers opt for more healthy food choices, soda makers like Dr Pepper Snapple are on the spot to think out of the can and forge strategic partnerships to stay relevant.

In this post we analyze social media conversations about soda to make sense of the $18.7 billion merger and better understand:

No soda, no pop

As consumers become more conscious of how and what they consume, their health choices influence purchasing decisions. Sales of carbonated drinks hitting a 31-year low in 2016 is an aftereffect of consumers moving to healthier beverages over soda.

When we analyzed social media conversations around non-alcoholic beverages like coffee, tea, milk, juice and soda in the past seven years to identify reasons that drive consumption of these beverages, we identified that the conversation centers around three main factors: ingredients, health, and consumer preferences. 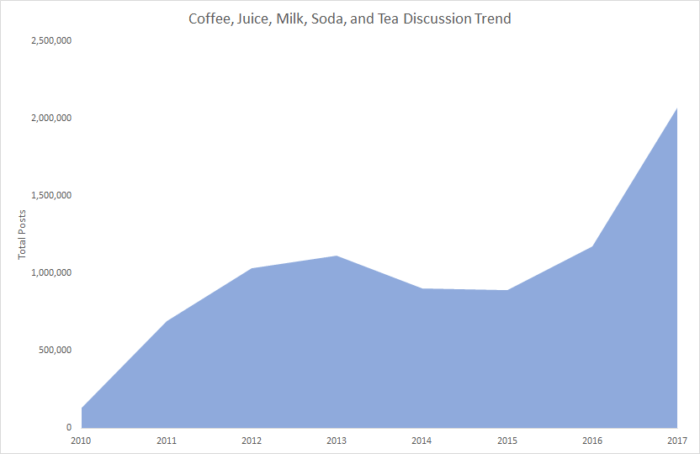 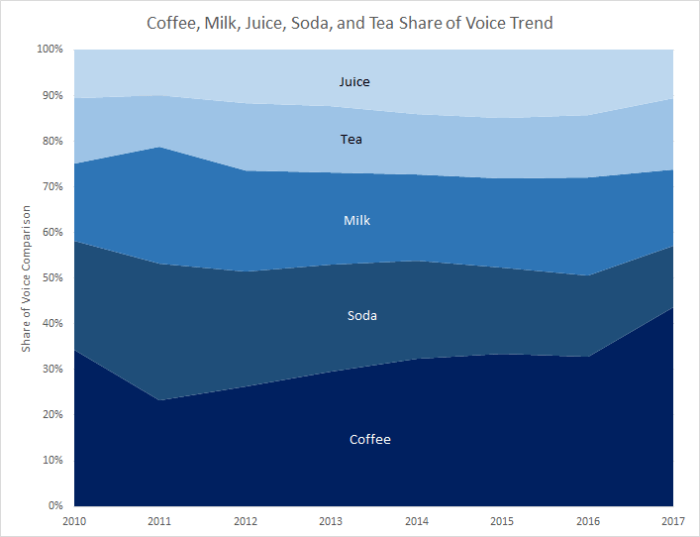 When we further broke down the patterns of discussion around ingredients, health consciousness, and consumer preferences, ingredients emerged as the most discussed topic, thanks to the ongoing social dialogue on healthy consumption. 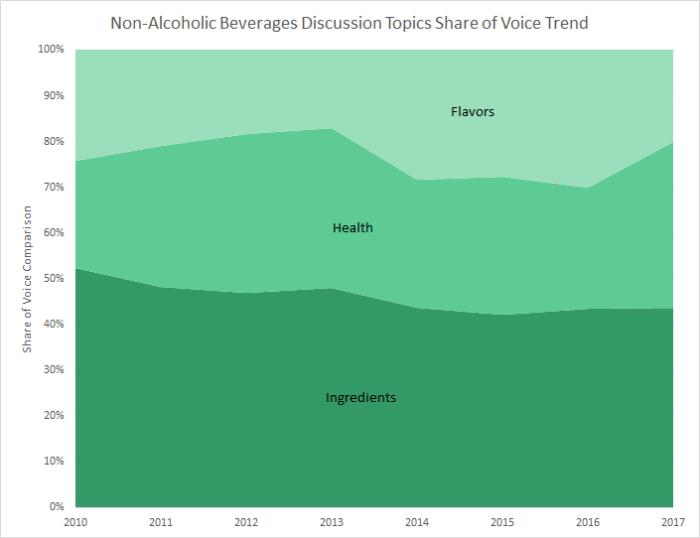 The ingredient discussion reinforces that people check labels before buying a product, which can dissuade someone from making a purchase.

Ingredients that most deter consumers are:

Aspartame is most discussed with soda. Another culprit is high fructose corn syrup found in soda and juice. Once considered a healthier alternative to soda, juice has now become similarly shunned due to its high sugar content.

Qualifying this discussion with consumer sentiment paints a clearer picture. 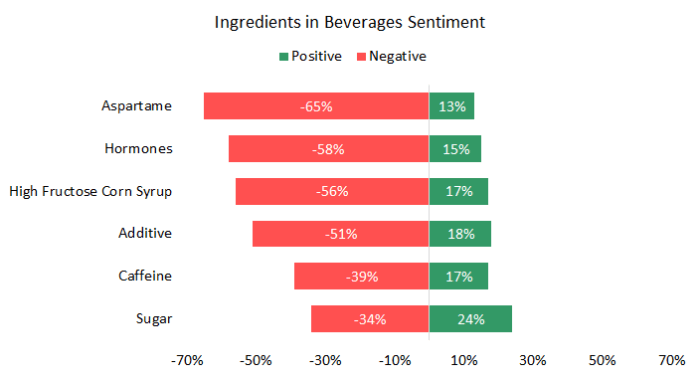 When we analyzed the conversations on social to glean specific sentiment associated with these ingredients, we found that, unsurprisingly, most were negative. Aspartame topped the list as people called it a cancer-causing substance which also induces mood swings. High fructose corn syrup, a cheaper alternative to sugar, is also discussed negatively for its association with diabetes.

If consumers are canning soda, what are they drinking instead?

As noted earlier, coffee is the most-discussed beverage occupying 30 percent share of voice in the conversation about beverages. Not only is it the most discussed beverage, it’s also one that is talked about most positively.

Digging deeper into coffee preferences aside from flavors, consumers also talk about the types of coffee they want to purchase or drink. Specialty coffee, defined as coffee produced in microclimates, is a coffee trend that has held steady throughout the years. 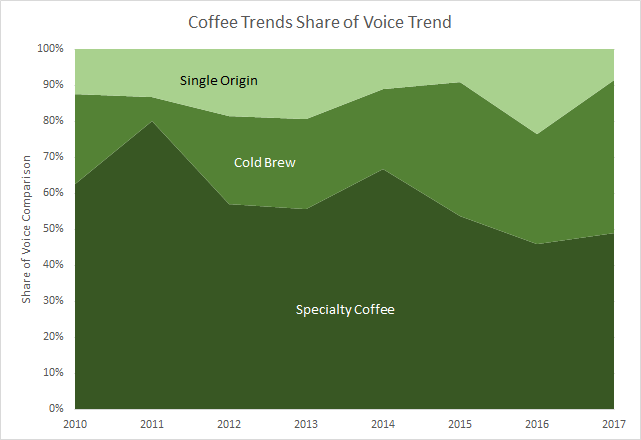 The concurrent trends of falling soda sales and rising coffee consumption has left soda-makers in the lurch while opening a field of opportunities for new caffeinated drinks.

“We’re seeing these coffee drinks now that actually resemble soda…It’s a way to get into the segment, because coffee is natural and healthy and tracks with consumer trends,” James Watson, a Rabobank senior beverage analyst told the Washington Post. For instance, Stumptown Coffee Roasters released a “Sparkling Cold Brew” last year in aluminum cans, which it promoted as a summer “road soda.”

Analysts have spilled a lot of ink explaining the relative benefits for both companies. On social, the audience rejoiced at the news and treated the merger as if it was inevitable.

While the wide distribution network is definitely attractive, the merger opens up opportunities for an interesting product line — combining Keurig’s single serve cups and Dr Pepper Snapple’s array of drinks.

Keurig was the fourth-largest coffee seller in the U.S. in 2017, with 7.4 percent of the market, according to Euromonitor International. Dr Pepper Snapple, meanwhile, was the third-largest soft-drink maker, with an 8.5 percent share, Bloomberg reported.

With this deal, Keurig is looking for its next step in the beverage industry, to be consumers’ beverage choice throughout the day. Dr Pepper Snapple provide a step into soda sales, and some of its products overlap with Keurig’s existing capabilities, while expanding the product line.

The decision to acquire and merge with a company is one that involves rigorous and meticulous vetting the market, the risks, and rewards. As social media vies to be a credible archive of consumer feedback and brand perception, it plays a critical role in market research. In the case of Keurig and Dr Pepper, consumer conversations provided enough evidence to gauge the success of the deal. Evolving consumer preferences direct the market and if brands are listening, there is a lot of hay to be made while the sun shines.