Study: MTV Movie Awards and the Social Battle for Movie of the Year

The MTV Movie Awards were first presented in 23 years ago in 1992 – undoubtedly well before many of this year’s viewers were born.

We’re days away from this year’s highly anticipated, widely televised event, hosted by comedian Amy Schumer. The best part of this particular annual awards show is that while MTV executives and producers choose the nominees, the general public vote for the winners.

Talk about giving power to the people.

The MTV generation changes with each new year that passes, and social media has been pivotal in up-leveling the visibility of the awards show and the MTV brand for a new generation of movie-goers and award show voters.

Plus, this year MTV will be testing live-streaming the red carpet via Twitter’s Periscope. If you need a refresher, read this Forbes article about the highly contentious battle app-based live-streaming tech Meerkat vs. Periscope.

Movie of the Year

The biggest award of the night will of course be Movie of the Year, so we focused our data analysis in on that looking at the following nominees:

How’s the social media battle waging for these films so far?

“The Guardians of the Galaxy” was dominating conversations in early March, but in the last two weeks “The Hunger Games” (“Mockingjay: Part 1” if you want to get exact) has been completely blowing the other films out of the water – at least when it comes to volume of mentions on Twitter related to the upcoming MTV Movie Awards. 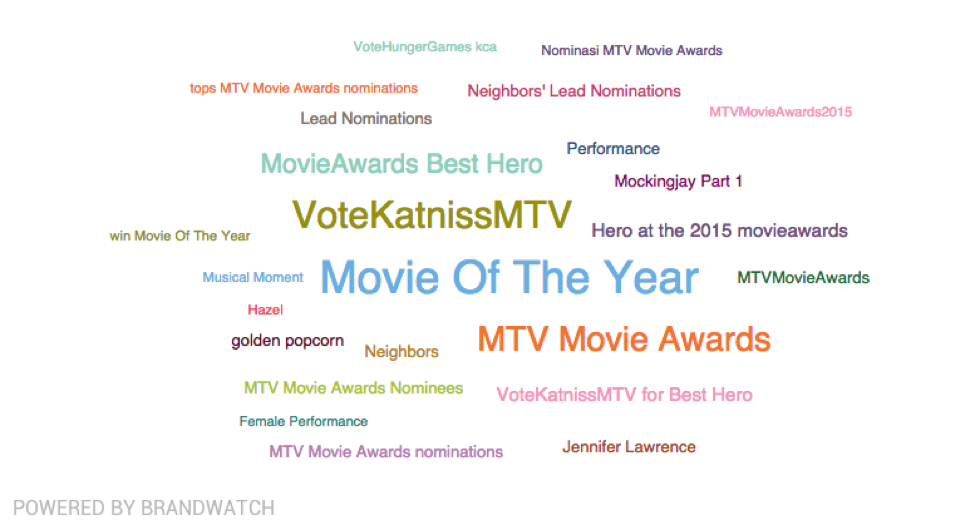 When it comes to most mentioned topics, Mockingjay heroine, Jennifer Lawrence, as well as the movie’s title, are in the top phrases used in social conversations but The Fault In Our Stars’ Hazel makes an appearance as one of the only nods to another film in the general conversation.

And the winner is…

“The Fault in Our Stars” was victorious, winning the 2015 award for MTV Movie of the Year. And the social media volume of mentions for people voting for that film predicted it.

Despite the marginal lead “The Hunger Games” had in the 48 hours leading up to the awards show on social, but once Sunday hit the volume of people voting for The Fault in Our Stars absolutely skyrocketed.

Over at Brandwatch we love tracking conversations about major events, like the World Cup and the Oscars, so we were intrigued to see how a more demographic-specific, US-focused event was discussed on social media.

Are you going to be watching the live show this Sunday, April 12 at 8pm ET to see which movie wins? There’s still time to cast your votes here.

If you’re jonesing for some fun content in the meantime, check out my favorite feature on the MTV Movie Awards site, 6 Degrees of Emma Stone. You better believe she’s connected to every single movie awards nominee.