How are the best CMOs on Twitter using the world's largest micro-blogging site to interact with their followers and, in turn, build their brand?

How are CMOs (Chief Marketing Officers) using the world’s largest micro-blogging site to interact with their followers and, in turn, build their brand? Over the last month we’ve used Brandwatch Analytics to answer these questions and more.

Analyzing Twitter’s 17 leading CMOs, we’ve discovered what content works, what’s being shared and who is leading the pack.

CMOs tracked included those of super brands like IBM, Cisco, HP and Mashable.

What do CMOs talk about?

Perhaps surprisingly, thought leadership posts only made up 21% of total mentions. Considering these individuals are considered as the leading minds in marketing, they don’t double down on these types of posts.

Instead they use the majority (40%) of their Tweets to put their own spin on company-related news to help build their company’s brand rather than their own.

With a combined 380,000 followers these CMOs are generating huge topics of interests for their audience.

Some of the most popular topics included: 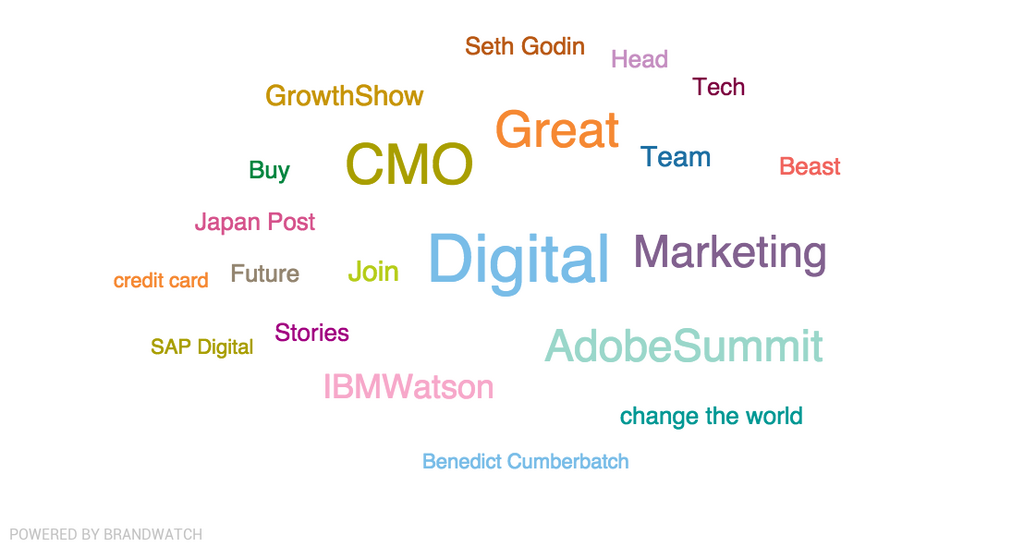 A somewhat surprising finding was one of the most popular topics about CMOs tended to be marketing operations that strongly utilized the CMO’s following.

Mike Volpe’s HubSpot podcast is a brilliant example of this. He hosts the ‘Growth Show‘, a 20 minute podcast where he interviews experts in growth.

Naturally, he shares his show with his 60,000 followers and thus pushes his followers closer towards his brand – HubSpot. You’ll notice his show appearing in the topic cloud above twice, with Seth Godin – their most recent guest – appearing in the word cloud.

According to a new report released by Leadtail and Neustar, 70% of CMOs’ most commonly shared sources are from mainstream news sites. The most common mainstream sources were:

For industry sources, the most commonly shared sources were:

This content typically covers broad business and technology issues, and very few CMOs do much to distinguish themselves from this trend.

Male majority: 64% of their engaged audience are males.

Business interests: The top interests of the engaged audience is unsurprisingly business, followed by tech.

Primary profession: Those engaging with CMOs tend to be individuals in similar marketing or executive positions.

The following index ranks the performance of 17 CMO’s online presence and social activity according to a series of key criteria.

CMOs are evaluated on the average number of RTs, @mentions they receive per day, and the total number of followers they have.

Average RTs and @mentions per post are weighted more than total followers, meaning those with less followers but with successful social activities could compete against large followings. 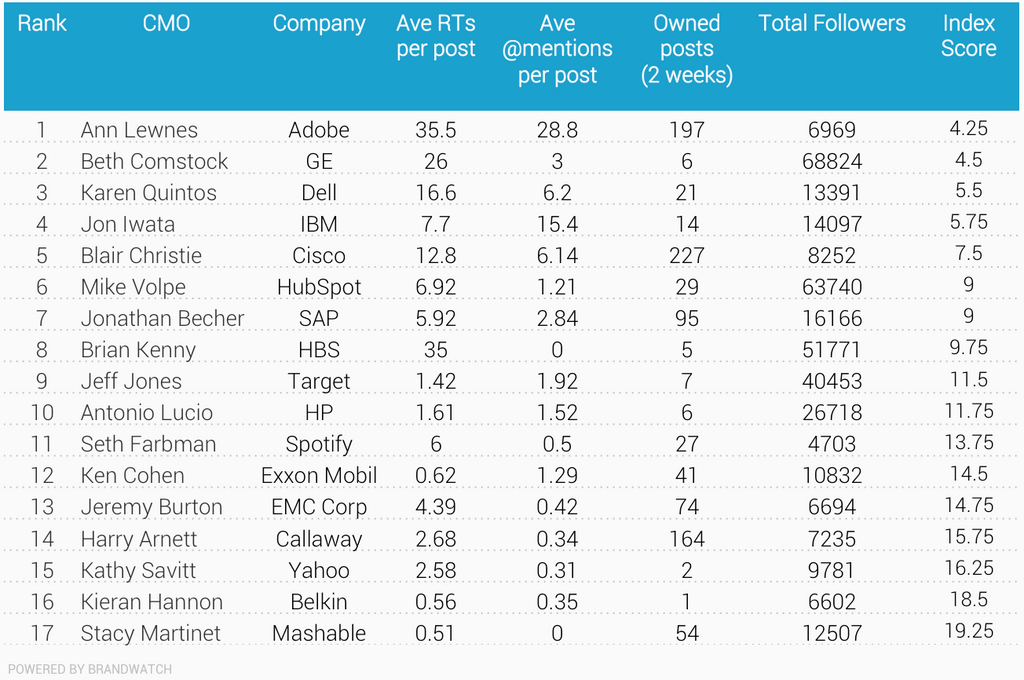 One outstanding factor from this ranking is how total followers doesn’t determine RTs or @mentions.

In fact, Ann Lewnes leads our index despite having only 6,969 followers (the fourth lowest).

The quantity of owned Tweets also doesn’t seem to have an effect on the amount of RTs or @mentions. Stacy Martinet, placed bottom of our table, Tweeted 54 times generating no @mention replies and only 0.51 RTs per Tweet.

Knowing how some of the world’s leading CMOs are using Twitter gives us invaluable insights into how to reach them.

Understanding how they use Twitter, and who uses the tool the best, helps brands stay on top of current trends in marketing.

All of the social data presented in this report was found using Brandwatch Analytics, a world leading social analytics tool. Request a hassle free demo today.