Brand Advertising: Why a Traditional Approach Won’t Cut it Anymore

Gone are the days when brands could keep a firm grip on their messaging. Consumers tend to trust recommendations above all other sources of brands adverts.

The 10-second spot was shaky, black and white, and depicted the outline of the United States like a classroom map imprinting on a child’s mind.

The image stood in silence for seven seconds. Then, suddenly, a voice said, “America runs on Bulova time,” a slogan many Americans had read or heard on the radio before.

At best, the commercial reached a few thousand people. Only 4,000 televisions existed in New York at that time.

So why did they do it?

Perhaps they took pride in being an advertising pioneer, just like when they broadcast the first US radio commercial in 1926.

It wasn’t long before other brands followed Bulova and adopted TV advertising as a conventionally-accepted mode of promotion.

Fast forward a few decades and we’re seeing echoes from this marketing innovation once again, but this time with social media.

Many brands have pioneered different approaches to making social work from an advertising perspective, from clever paid placements to organic, viral campaigns.

This is especially the case in the consumer packaged goods (CPG) industry, in which brands are using it to completely transform the way they promote their products; much like the opportunity that TV first afforded in that it is comparatively cheap yet still experimental and somewhat uncharted.

Where Should Advertising Spend Go?

In 2013, CPG brands (known as FMCG brands in the UK) boosted their spend by a considerable 6.8%, giving them a 25% share of the $557 billion total advertising spend that year.

But why should brands invest in social campaigns, and why are so many flocking to establish such heavy marketing presences on social networks?

Data, taken from our latest report on Household & Personal Care Goods, shows that consumers are spending more time than ever using social media. In one study, 29% of respondents stated that they frequently use social media to express disappointment about a household purchase, brand or retailer.

In fact, respondents were more likely to complain about household products than any other vertical. 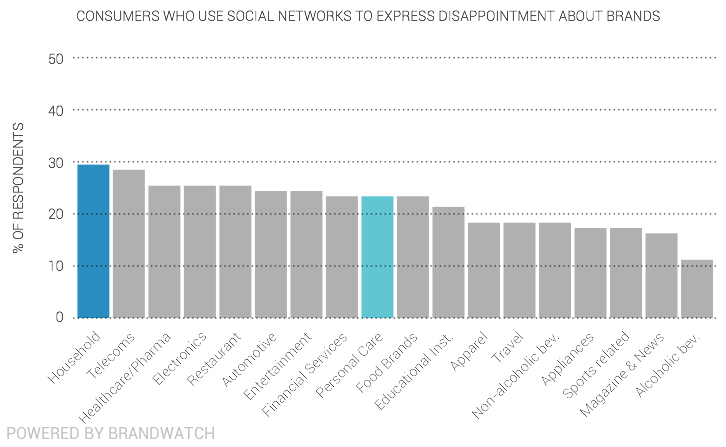 Such data indicates, as many of you will already be well aware of, that social media is unlike TV – it’s not possible to utilise it for promotion alone. Consumers are using it for a diverse range of purposes, a factor that brands seeking to advertise via social will need to keep firmly in mind.

Gone are the days when you could keep a firm grip on your messaging. Consumers tend to trust recommendations above all other sources of advertising.

It’s clear that the well-established methods used in brand advertising – a produced video or a cutting line of copy – will no longer suffice, at least not in social media.

Today, the most preferred sources of product info among social media users are consumer-generated reviews and product ratings. 84% of global online consumers always or sometimes act on recommendations from people they know.

Creating a social strategy that attempts to harness this word of mouth (WOM) is likely to be far more effective than one based on traditional marketing methods, whether that’s through an advocacy/influencer program or something more novel. 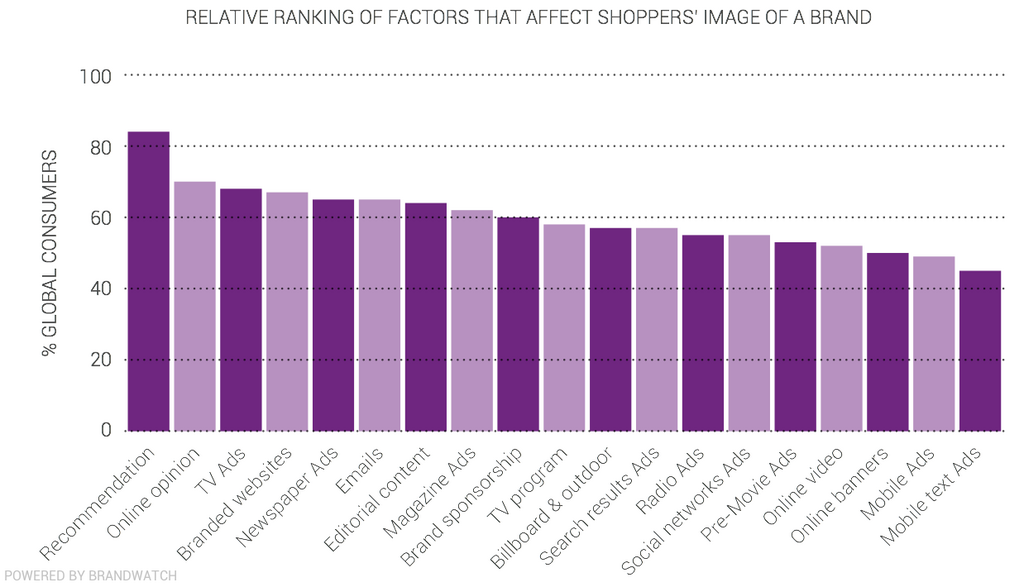 In a market saturated with clutter, marketers need to find non-traditional methods to reach modern consumers who more often ignore TV commercials. While many marketers believe advertisements have a big impact affecting the image of a brand, consumers seem to feel differently.

That is not to say that TV commercials are invalid. There is naturally a great deal to be said for the ‘unwitting, subconscious effect’ of TV, but modern marketers must accept that as consumer behaviour and expectation changes, so too must brand advertising techniques.

How will your brand stand out?

Social media inherently exposes weak brands in a way that traditional marketing doesn’t, so ensuring the message that is shared is positive, and owning the conversation rather than just reacting to it, is paramount.

Of 1,500 shoppers interviewed by P2PI & Crossmark, 70% say they will share a brand experience on social media. 80% shoppers claim to favor brands that engage directly.

Faced with a dizzying array of word-of-mouth options, successful CPG brands have tried a little bit of everything to figure out what works best.

These brands have strived to push the envelope of reaching new customers and promoting their products, and are helping fuel a new generation of advertising methods.

However, in truth we’re still walking a similar path to Bulova back in those early, experimental days of TV advertising, and we’re going to see plenty more innovation in years to come. For now, here’s what you can do to take advantage of this sea change.