The Future of Social: Privacy is Terminally Ill, and it’s All Your Fault

This week the Brandwatch blog is devoted to exploring what’s next for social media and technology, and some of our best authors will be presenting their ideas and thoughts on what the future holds. And so will I.

One particular area of interest for me is what has been called ‘the internet of things’.

In short, this is the name for the trend of the ever-increasing volume of internet-enabled things.

According to IBM, there will be 1 trillion connected devices by 2015. Sounds like a lie to me, but to say I am ill-equipped to make an accurate assessment would be a glowing compliment to my abilities, so let’s assume that IBM know what they’re talking about.

The advent of social media has meant that ‘online’ has become synonymous with ‘social media’, and the omnipresence of Facebook and Twitter-enabled services has developed in tandem with the advance of the internet of things.

One company doing a decent job of articulating what I’m harping on about is EVRYTHNG, who made this 77-second video to explain the concept a bit more succinctly.

The picture I’m seeing is a world where devices are ingrained entirely within our lives, and social media embodying a large chunk of that.

Consider that even today I could be getting the bus into town, paying using a contactless card, playing an online game on my 2DS, messaging a friend on my Samsung smart watch and watching some dancing tutorial videos on my tablet.

Then once I get to the Youth Club, I could be boogeying down the local disco with my Google Glasses to work out which song is playing and using my phone to find out the Klout score of all the honeys I’m dancing with.

Extrapolate this, and you have a life that is closely integrated with technology and associated cloud services. 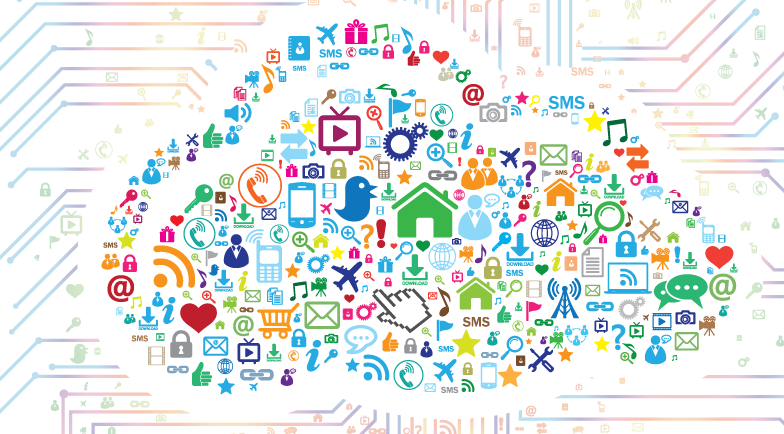 Perhaps your medication tells you when you’re due a new dose. Maybe your TV informs you of when its warranty expires based on your specific purchase history and usage, and could even update you with recommended local repairmen should it break.

4G and other wireless tech’s introduction to the scene will accelerate the seamlessness that humans will begin to live with the internet, but also the digital footprint that they leave behind.

The synchronicity of these devices and connections will only become more intricate, and businesses will be able to aggregate and analyse a dataset of consumer behaviour like never before, and adjust their entire operations accordingly.

Amid the hysteria surrounding PRISM and other digital surveillance programmes, and an apparent rising distaste for Government monitoring of our actions, an interesting observation for me is that directly parallel to this is an abundance of data that is being willingly broadcast by citizens.

Just logging into my Google account reveals a scary amount of information about myself. It knows where I work, where I live, how many emails I get, who I most frequently have meetings with, which devices I own, where I’ve been on holiday, how long it takes me to get to work, how many hours I spend at work and so on.

Couple this with the issues I was discussing up there ^ and we find ourselves in a state of something like a collective cognitive dissonance.

We’re complaining about the decreasing perceived civil liberties and personal privacy, yet simultaneously broadcasting every aspect of our pathetic little existences on social media.

The internet of things will only amplify this, with our devices assisting us in updating the cloud with the minutiae of our lives.