Networked Lifestyles: The Internet of Things

We look at Asia-Pacific consumer opinions on the internet of things.

One of the hottest topics in consumer electronics is the Internet of Things (IoT). This grand yet vague-sounding term encompasses an ever-growing range of products, from fitness trackers to voice-activated home appliances, and even self-driving cars – once science fiction!

Whether at home or in the office, connected devices enable us to control the finer details of our living and working environments, such as security cameras or thermostats. For companies, the IoT helps to streamline common business processes and allows workers to integrate more deeply into their surrounding tech environments.

IoT technology is now developing at a rapid rate, connecting anything and everything imaginable; such as smart cities, which have become well-established around the world. Even entire countries are now jumping onto the bandwagon, starting with Singapore announcing its intention to become the world’s first ‘Smart Nation’; a goal well within its reach.

Smart nations aside, Asia-Pacific has already staked a major claim to the Internet of Things, thanks to the global success of regional brands such as Samsung and Xiaomi. Along with many smaller players and startups, these companies are churning out wearables, smart TVs, and other connected devices.

Research from consulting firm Bain and Company has predicted that the Internet of Things industry is likely to double in value by 2021, reaching a whopping $520 billion. In Asia-Pacific, most of the IoT spending is likely to come from developing economies, primarily driven by China and India. Mobile IoT devices are a particularly strong focus among Asia-Pacific consumers, with predictions tipping the region to become the world’s most connected by 2020.

Most importantly, what are consumers in the region saying about connected devices and the Internet of Things? Do they have any particular concerns or fears about this technology? Which trends are falling flat, and which still have room to grow?

In this post, we’ll analyse data from millions of consumer conversations about the IoT, to gain insights on these questions within a regional context.

Looking at the conversation volume over time about the Internet of Things tells us that regional consumers have been talking about connected devices fairly consistently for the last five years. A large spike emerged during late 2017, where 250,000 mentions were made in just a single month, likely driven primarily by the holiday season. 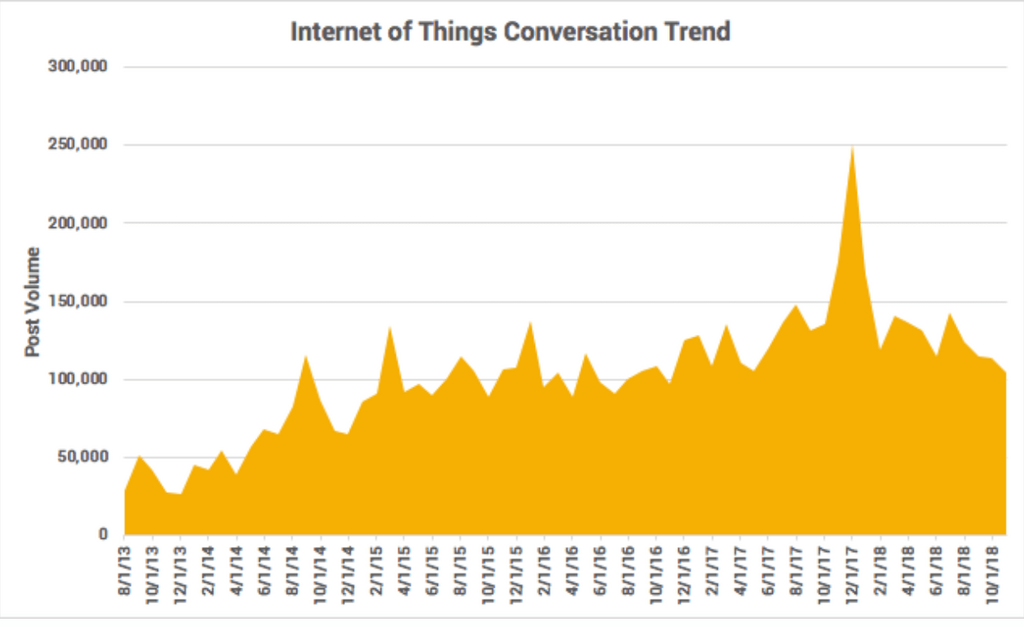 Narrowing down the date range to focus on that specific period, we can see the frequency of technical keywords that are driving the discussion, including blockchain, deep learning, industrial IoT, machine learning and artificial intelligence. The presence of these words suggests that specialists are driving much of the current discussion, as it is largely related to fields where cutting edge technological innovations are the most likely to be taking place. 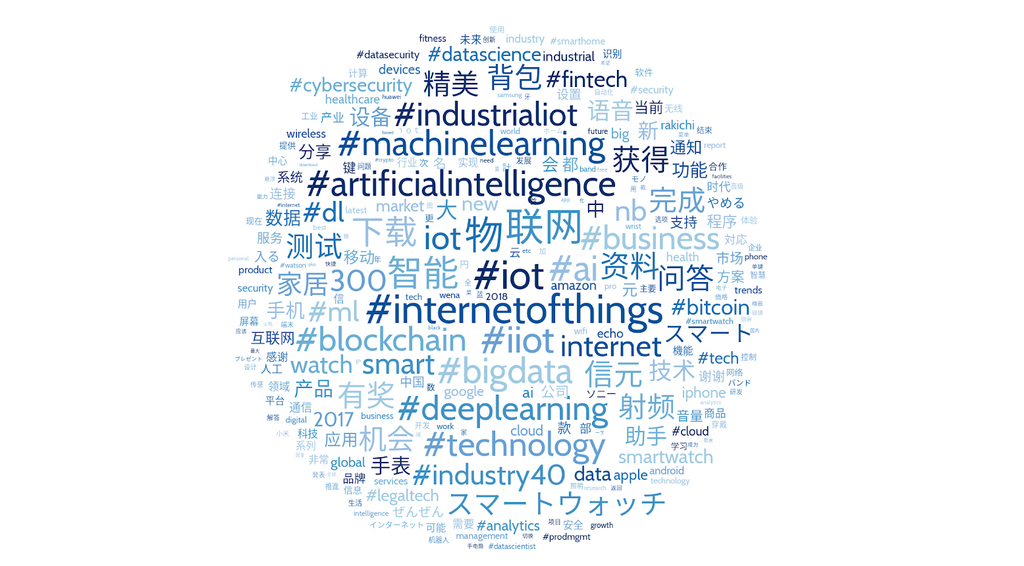 IoT offerings from certain brands have made more of an impact than others on Asia-Pacific consumers. Despite being homegrown brands, it’s surprising to see that South Korea’s Samsung and China’s Huawei capture far less of the Asia-Pacific conversation than might be expected. Apple and Google outstrip both of the regional brands, despite Huawei’s vast popularity in China and Samsung’s strong performance internationally. 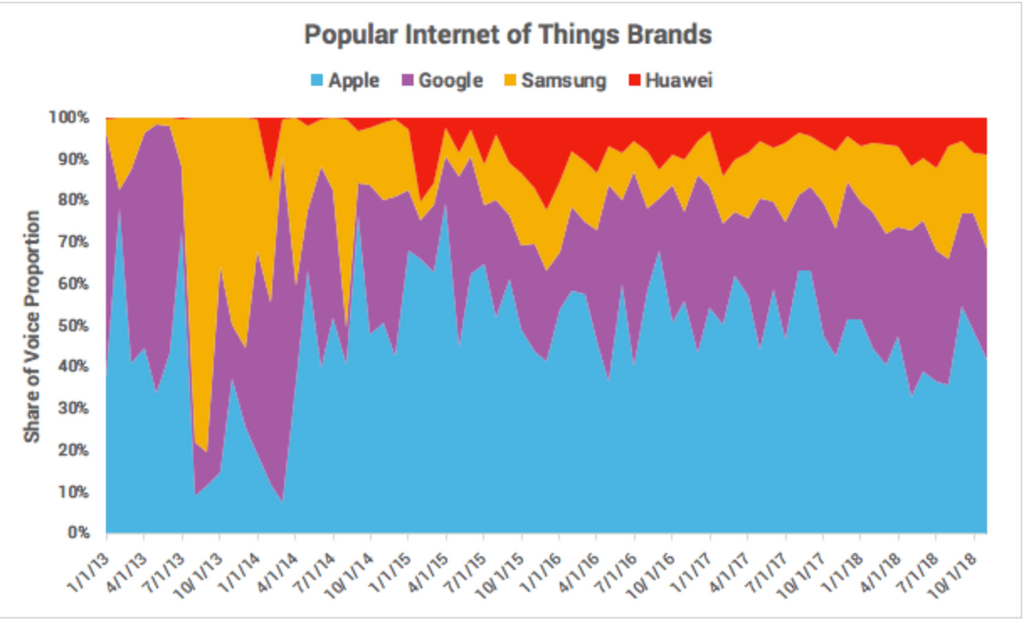 Mobile devices have been at the forefront of IoT adoption since the industry’s early days. The iPhone still reigns supreme among Asia-Pacific consumers, judging by the level of discussion mentions it receives – a substantial 42% higher than closest contender Samsung Galaxy. This pattern reflects how the wider Apple and Samsung brands are faring among consumers. In contrast, the Google Pixel and Huawei Mate devices capture a mere fraction of the overall discussion. 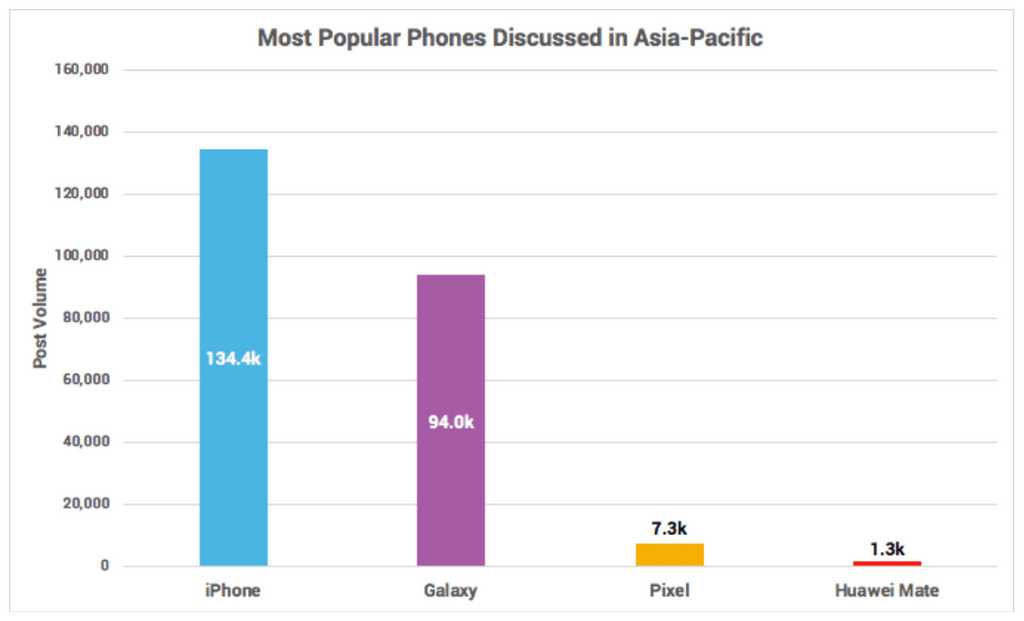 In this post, we looked at the changing shape of discussions related to the Internet of Things among Asia-Pacific consumers. We discovered that interest has grown steadily over the last five years, largely driven by consumers talking about the more technical areas of of the topic. In terms of brands, big global names and products, such as the Apple iPhone, still capture most of the conversation, with homegrown regional contenders like Huawei still playing catch-up.

We’ve demonstrated how analysing consumer conversations from across social media can give marketers the benefits of deep insights on shifting trends around topics of interest, such as the Internet of Things. Social media analytics can also help marketers measure brand health, track audience engagement and scour for potential opportunities – invaluable intelligence for planning future marketing strategies in new regions of the world.

Want to learn more about consumer electronics trends in the APAC region? Read our report Consumer Technology in the Asia-Pacific Market!