Social Media Week: The Round-Up for 2013

Social Media Week 2013 has officially come to a close, and what a week it was. With events taking place across five continents, 8 cities and hundreds of venues, it’s no wonder that it proved to be a hit with thousands of attendees across the globe.

This year as Social Media Week returned to London, our team at Brandwatch was incredibly excited.

Not only were we proud sponsors of the event but we were also showcasing our brand-spanking new product: Brandwatch Vizia.

If you didn’t get a chance to pop in and see us then you can watch the Vizia video below:

However, among all this excitement we remained true to tradition and created a real-time data visualisation to envisage the conversations surrounding Social Media Week. 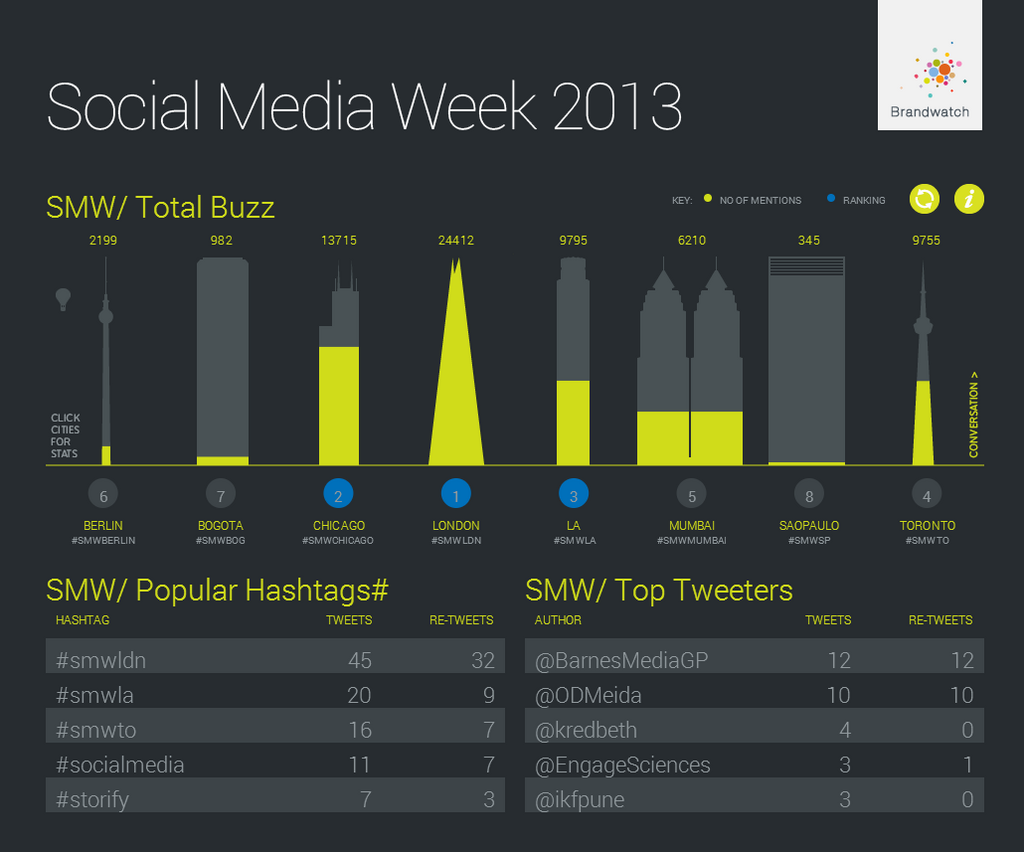 Each city was represented by its tallest building, creating a visual spectacle in the form of a bar graph and pitching each city against each other in an ‘online mentions’ battle.

Clicking on each city’s icon then enabled you to drill down into the data to reveal the runners and riders on a city level.

So what insights did this year’s SMW data visualisation reveal?

London was spoken about the most, winning with a total of 24,378 mentions for the week, this was consistent with the most popular hashtag being #smwldn.

However, London was closely followed by its rival cities, with Chicago and LA taking 2nd and 3rd place respectively.

This year saw SMW debut in Mumbai, India. And they came up fighting with a very strong presence among the popular hashtags and tweeters throughout the week. They were also the fifth most mentioned city, seeing them beat Berlin with nearly three times as many mentions.

Sao Paulo, was the least mentioned city during Social Media Week receiving only 1.5% of the volume that London did.

With talks covering social media in the fashion industry to how to establish your digital persona online, Social Media Week seemed to have been an interesting one for all involved.

Let us know about your Social Media Week experience in the comments below.