Earth Day started 45 years ago, an embryonic stage in the development of the personal computer, an age that would have required ample doses of LSD to imagine the ubiquity of today’s internet chirping with tweets. It was also about the same time that the human species became conscious, at least in isolated cases, of our power to influence the fate of nature.

While the story of technology has been one that increasingly disconnected us from nature, the global brain taking shape on the neural networks of social media offers a prospect to bring us back in sync with the natural rhythms of the planet.

When people have good information and a sense of shared community, anything can be accomplished.

With this in mind, at the encouragement of Farhan Laji, we combined the green Spidey sense of Corporate Knights, a publisher of green rankings since 2002, with Brandwatch’s team, led by Nick Taylor, to distil the noise of twitter down to a green symphony orchestra of the 100 people tweeting the most useful eco-musings.

The list was boiled down from 100,000 Tweeters actively posting about green issues, and identifies the 100 most influential Twitter users in and around the environmental community, based on their influence in the green Twittersphere.

The Top 100 Eco-Influencers on Twitter ranking includes mainstream individuals who have built a large following on Twitter within the global environmental audience as well as professionals who work with and tweet about environmental issues. The Influencers are awarded a “Green Score” on a scale of 1 to 100, calculated according to three different measurements: Authority, Audience and Activity. 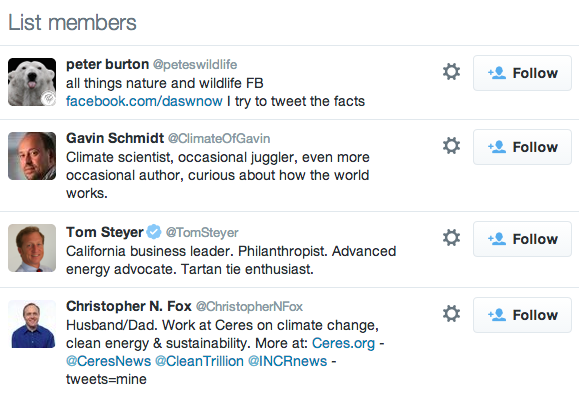 If you are curious about the environment, and you want to get the goods from the people with the greenest street cred on Twitter, you can view the full Twitter list or read our article discussing it.