The Top-line Metrics That YOU Should be Monitoring

In line with the advice we’ve presented in our eBooks, we’ve also taken the opportunity to outline how a company may approach some of the guidelines we described and provide a taster of how a tool like Brandwatch can help.

The following is a brief journey you might take if you were to peek over the top-line metrics gathered from using a social media monitoring tool such as ours.

Ben & Jerry’s is a confectionary company that focus much of their marketing effort on promoting their main product, which is ice cream.

When searching for what people have been saying about Ben & Jerry’s, the first stage would be to set up a query searching for branded or key terms. To keep it nice and simple, we’ve gone with

Using Brandwatch’s tilde operator, we can perform a search that looks for the words Ben and Jerry with just one word between each other, and using the raw operator we can search for matches that correctly use the possessive apostrophe in the brand’s name. This accounts for all variations of ‘and’ between Ben and Jerry: and, &, ‘n’, or even a word that is unrelated.

We’ve got an overview of query creation here.

The summary dashboard in Brandwatch shows us plenty of information about social media activity surrounding the Ben & Jerry’s brand.

Initially, the most important figure is the volume of mentions. This tells us how much buzz the company has been getting across social media networks and elsewhere online, by default over the past 8 days. We’ve added historical data dating back two months so that we can look back further into the query

Brandwatch is also able to automatically detect whether a mention is positive, neutral or negative. We can see that the ice cream company has enjoyed 14,000 mentions over the past seven days up to February 19th, 10,000 of which are positive.

By modifying the date range, the volume of mentions over time reveals which period people were talking about Ben & Jerry’s most in, and hopefully display some meaningful information about the company’s online presence.

From observing this data, it is evident that the brand experienced a jump in mentions in February, most of which were positive.

By diving into the data, we can see that most of the mentions on this day were due to it being Valentine’s Day, a date that Ben & Jerry’s ice cream is often keenly associated with (for grateful girlfriends and sobbing singletons alike). 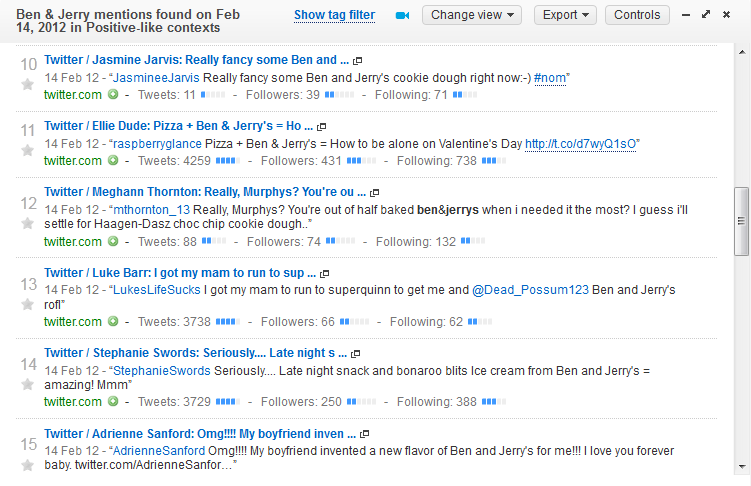 Plunging even deeper into the data shows us a wealth of information about one specific mention. We can see data about the site the mention comes from, in this case Twitter.

Brandwatch displays the mozRank (the credibility) of the site, the number of backlinks, the volume of monthly visitors and other traffic data, such as location of the servers and gender usage share.

Furthermore, the individual mention view shows information about the author of the mention.  In this case, the mention is from Twitter, so Brandwatch shows the date the tweet was sent, the number of followers the user has and how many others they are following. 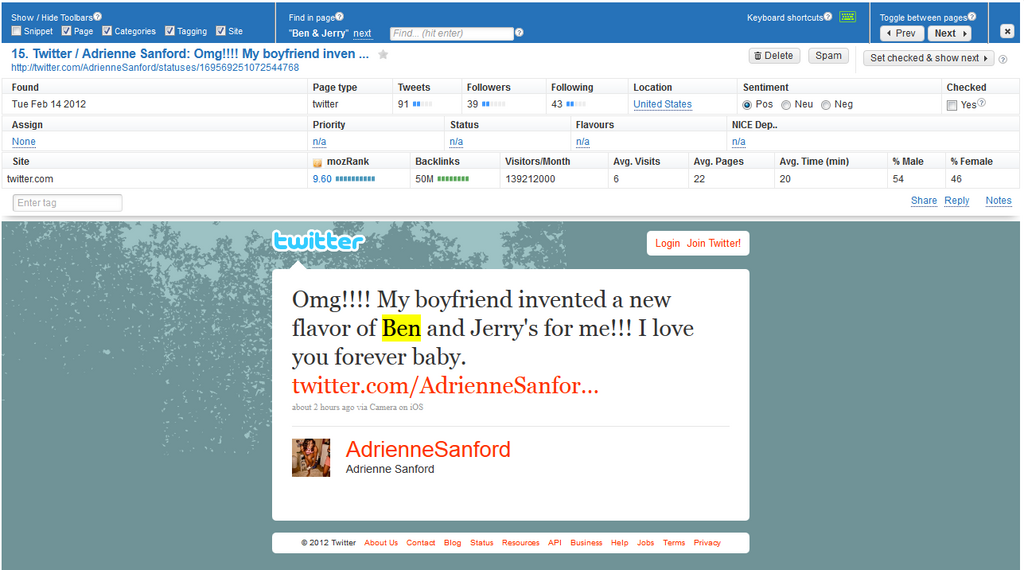 Other data available from this screen are not just read-only. From here, users can assign this mention to another user for workflow, so that the correct team member or department is referred to this mention. Priority, status, sentiment, category and a binary check box can all also be modified for data clarity or task management reasons.

These options can also be automatically adapted to something through the use of Rules. This allows users to define incoming data into ‘if’ statements, and set a resultant action. An example of this could be all mentions of ‘out of date’ to be automatically assigned to a customer service team member and classified as negative sentiment.

Other useful components in the Brandwatch dashboard can be found in the ‘top sites’ tab. Here, we can see a breakdown of which type of sites the mentions are most commonly found.

The overwhelming majority come from Twitter, though it’s important to note that Brandwatch can also display more detailed data about each type of site. In this tab we are able to observe which news sites mention Ben & Jerry’s the most, which is Wetpaint, Mashable and the Guardian.

Further data is also shown, such as the location of the site, the mozRank and plenty of other information. Again, like before, we are also able to dig into this data to see the specific instances in which these sites mention the brand, and go deeper still to the mentions pop-up page too.

Clicking on one of these will reveal the mentions from exclusively that site. 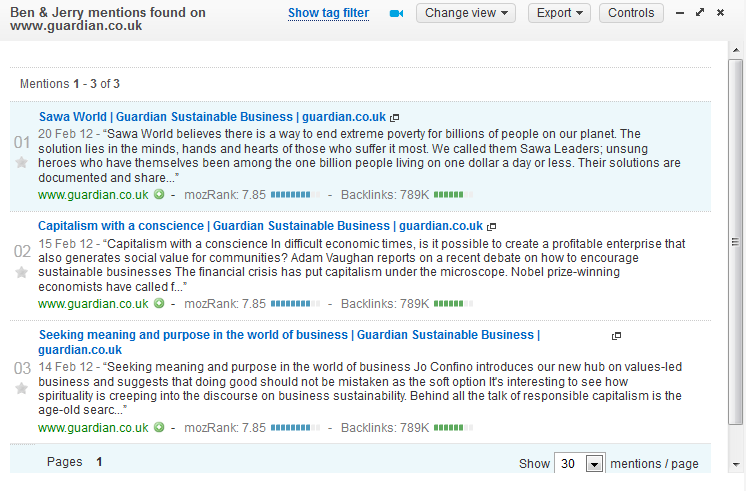 The tab also provides data on the top tweeters, the top forum sites and the top blogs, as well as allowing users to create their own site groups to analyse.

The top tweeters component presents detailed information about each Twitter profile, which can be accessed by clicking on the icon. Here, users can see detailed Twitter statistics, Klout score and topics, a Google map with location data and other useful information. 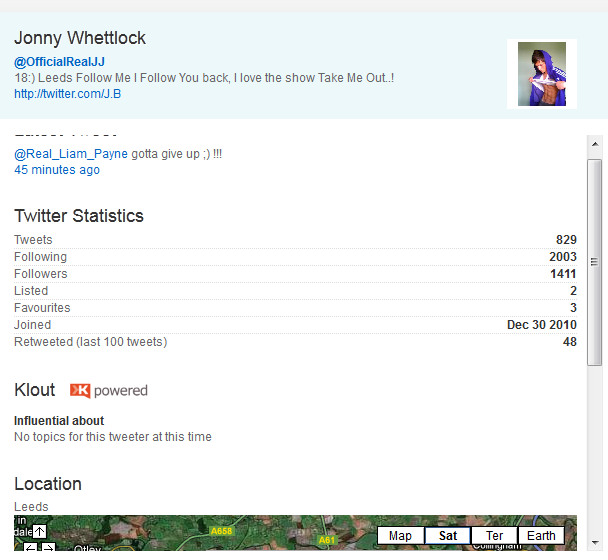 This was just a tiny sample of some of the data Brandwatch can provide. If you’d like to find out more, stay tuned to our content over the coming weeks, or even better, request a live demo to get a free guided tour of our amazing tool.