The Virtue of Context: Fully Understanding the Effect of Olympic Sponsorship

Analysis of the official Olympic partners by Brandwatch and MediaCom shows how simple methods can extract much more meaning from social media data.

Social media monitoring is rapidly becoming a vital practice for businesses of all sizes. Measuring the visibility of your brand online provides great insight to how crucial business dilemmas can be tackled.

As with any analysis, however, adding context to these social media findings is paramount. Any number of companies can count the number of times a keyword is mentioned on the internet, but what does this actually mean?

This is where Brandwatch steps it up. 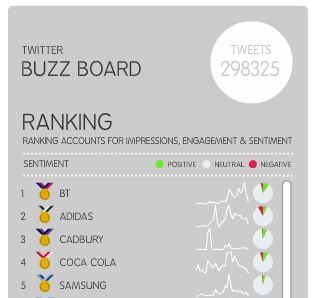 Brandwatch, one of the world’s leading social media monitoring tools, has teamed up with MediaCom to evaluate the online popularity of the 25 official partners of the Olympic Games.

These companies are ranked on a daily basis according to their ‘performance’ online, with the day’s leading three sponsors subjected to further analysis. Our Buzzboard, as we’ve taken to calling it, updates every day, keeping the viewer engaged with movements in real-time.

The ‘performance’ of these partners can be approximated in a number of ways but, obviously, merely measuring online visibility doesn’t tell the whole story.

The tone of this content needs to be analysed. We have to establish what social media users are saying, and how they are saying it, to gauge the popularity of a brand.

The Brandwatch/MediaCom methodology recognises the value of context. The sentiment of this conversation is evaluated by the Brandwatch app, classifying tweets as positive, negative or neutral towards the brand in question.

Whilst rival analysis of these official partners appears to ignore the tone of this chatter entirely, this is simply the starting point for Brandwatch and MediaCom.

We understand that conversation posted about a brand in a negative context does the opposite of what was intended by McDonald’s, Adidas et al when they paid hundreds of millions of pounds to be affiliated with the Games. Sounds almost obvious, doesn’t it?

The Brandwatch/MediaCom methodology also factors in the amount of engagement encouraged by the brands as well as the total potential following of the tweeters, thus rewarding brands that are discussed by the BBC, for example, rather than Joe Bloggs.

All of this is tied together neatly to generate a score, ranking the partners. Although this may appear more complicated to read, it needn’t be.

A minus score simply means that more Twitter users read negative comments about the brand than positive. Easy. 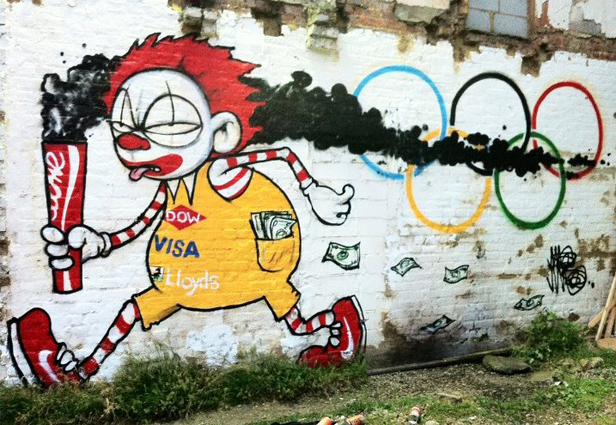 The implications of such a method are clear. Other rankings providers have consistently listed McDonald’s at the summit over the past week, for example. Of course, McDonald’s will be mentioned more online than most other partners due to its sheer size.

Closer inspection, however, shows that the bulk of this chat is critical of the company. The Brandwatch/MediaCom table has largely shown McDonald’s struggling at the bottom. This is a crucial distinction.

So, there we have it. The Brandwatch/MediaCom method shows clearly how one simple element of context adds oodles more oomph to our analysis, making the findings truly insightful rather than eliciting more questions from baffled readers or leaving them none the wiser.

We’re always thinking about how to get more from our data and our Olympic partners Buzzboard shows how simple this can be.