PR Data Analyst, Kellan Terry, shares an inside look into the daily emails sent between our communications team. What dominated the headlines, and why?

We’re looking to start a new, little tradition here at Brandwatch, and by tradition I mean a weekly segment that is composed from a collective of daily emails shared within our communications team.

The nature of these daily emails is the news that dominated the headlines. We must always be in the know here at Brandwatch. We must always have our fingers on the pulse of what is trending, and the social news cycle.

The following is what was trending in the news each morning (EST) last week.

Tiger Woods – The legendary golfer was arrested over the holiday weekend for Driving Under the Influence, but Woods has now said that alcohol wasn’t involved, rather it was a reaction to medication.

Portland – Two men were stabbed to death, and a third was injured, by a racist, white-supremacist on a train in Portland. The three attempted to intervene as the racist went on a rant toward two, young, muslim women. The perpetrator will appear in court today.

Kushner – Reports have come out that Jared Kushner sought a backchannel communication stream with the Russians. I have seen the word “treason” a lot.

Harambe – The previous weekend marked the one year anniversary of the killing of the now internet famous gorilla.

Snapchat CEO – Evan Spiegel married Miranda Kerr this past weekend, and there are virtually no pictures of it on the internet. Cue the exact same joke from absolutely everyone – “It’s because they disappeared after 10 seconds.”

Gregg Allman – The rock and roll legend passed this past weekend at 69 after a bout with liver cancer.

Covfefe – The now viral, nonsensical word is all over the internet in response to a Trump tweet that featured this mashed-up term. The tweet remained on Trump’s feed after he continued to tweet showing that he didn’t know it was posted.

A little something extra: 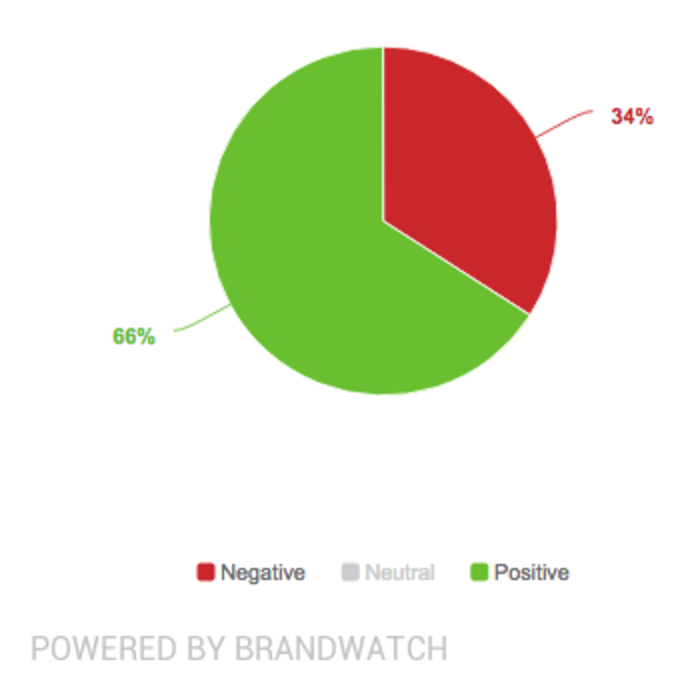 The positivity of this conversation stems from the internet’s sense of humor. Memes are riddled throughout this conversation, and people are taking this opportunity to crack jokes and interact with other people.

Negative mentions, on the other hand, focus on how tired users are of continuous social outbursts by Trump, and how incoherent he appears with his first “covfefe” tweet.

Portland Stabbings – The perpetrator appeared before a judge yesterday where he proceeded to outburst so much that he couldn’t enter a plea.

Ariana Grande – Is returning to Manchester, England to play a charity show for the victims of a terrorist attack that occurred at her first show. She’ll be joined by such stars as Justin Bieber and Katy Perry.

What Can Social Data Tell Us About Matcha Tea Drinkers?

The Brandwatch React team dives into the social data on matcha tea drinkers to find out how people discuss the drink and associated products online.

Kathy Griffin – After uproar and outrage over some graphic photos, CNN has cut ties with Kathy Griffin. Griffin has publicly apologized for the images, but the damage has been done. She has even been dropped by Squaty Potty.

Paris Climate Agreement – While reports surfaced yesterday that Trump intends to pull the US out of the Paris Climate Agreement, Trump is set to make his formal announcement on the matter today. Elon Musk – an advisor on several capacities to Trump – has said that he will no longer advise Trump if he does this.

Nigel Farage – Nigel Farage, who played a large role in Brexit – has been named as a person of interest in the investigation of Russia and Trump campaign collusion.

A little something extra:

With more than 26,000 mentions of all the Sgt. Pepper hashtags on social, and an almost entirely positive conversation (at 98.5-percent positive), it’s clear that 50 years has only added to the fervour surrounding The Beatles.

If there was any question around which track was the most iconic from the album, it was quickly answered within the conversation’s top trends.

NBA Finals – B-b-b-b-b-basketball…last night saw game one of the NBA Finals between the Golden State Warriors and the Cleveland Cavaliers. This is the third year in a row that these two teams have faced one another in this championship series. The past two meetings were split with each team winning one championship.

The Philippines – Yesterday an individual who allegedly attempted to rob a casino resort in the Philippines killed around 36 people as the alleged perpetrator lit tables on fire, and people suffocated on the smoke. There were reports of gun shots, as well, and details are still emerging.

Blue Apron – The cooking startup filed for an IPO yesterday. This comes as Blue Apron recorded around $800 million in revenue last year.

There we have it. Not only all the news that was fit to print, but the headlines that were actually printed. Catch us again next week for another post.