It’s officially Fantasy Football season! If, like me, you’re not a football fan, this season might not mean much to you. However, as a data analyst, it def

If, like me, you’re not a football fan, this season might not mean much to you. However, as a data analyst, it definitely caught my interest.

Sure, people are having fun with Fantasy Football, but they’re also actively talking about it online, especially on Twitter. That piqued my interest, and I knew I had to do some digging around. I quickly Googled around for “Fantasy Football 101 ” guides and, alas, I couldn’t find much for a beginner like myself.

That’s when I thought – with all the daily conversations on the topic on Twitter, why not learn from the data itself? What are the recurring themes and topics? How has the volume of mentions changed over time?

This last question can be perfectly answered thanks to Hindsight , Brandwatch’s new feature that gives me access to historical Twitter data back to 2006. 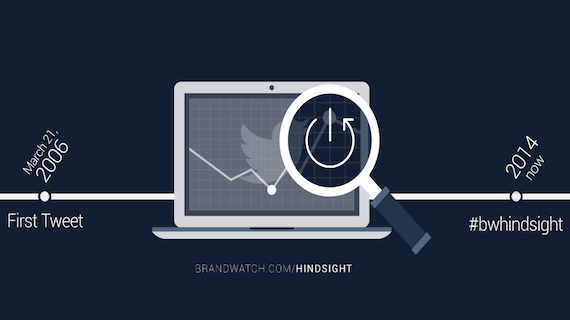 I first built the query. My thought process was: “if I was a football fan and I wanted to talk about Fantasy Football, what keywords would I use in my Tweets?”

So, I came up with the following:

After running the query I quickly looked at the demographics for it and noticed something: most of the mentions came from the US and the UK.

Sure, there were mentions in other places too, but the US and the UK had the biggest concentrations of mentions.

To have a closer look, I split the two demographics, so I ended up with a UK segment and a US segment. That’s when I noticed something interesting.

Looking at the mentions, I noticed some linguistic differences – i’m not talking about apartment vs. flat or elevator vs. lift – I’m talking about different themes and topics altogether, although they were still related to Fantasy Football.

This might be elementary for someone who’s already into Fantasy Football, but for a total beginner this is valuable information that can help me further in my analysis.

Overall, the US mentions outweighed the UK mentions in number. In fact, out of all the mentions I found from 1st January 2014 to 31st August 2014, 83% of the mentions were from the US. 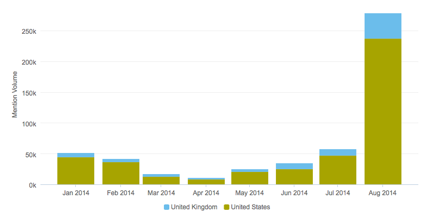 In terms of gender split, the mentions came from a predominantly male demographic, with almost 90% of the UK mentions coming from men…

while in the US about 3/4 of all mentions came from guys:

After looking at the Tweets and identifying the recurring themes, I went back and rebuilt the queries.

The demographic segments I had built were definitely useful for me, but now that I knew what other keywords people associated Fantasy Football with in both the UK and the US, it was my due diligence to refine my queries.

I ended up splitting the one query in two:

– one for UK mentions

– one for US mentions

Luckily for me, Brandwatch updated all of my previously retrieved mentions – adding any new ones to my dashboard and any of the components I had previously added, so I didn’t lose anything. (Pretty handy if you ask me.)

The Power of Hindsight

We’ve tackled interests, gender splits, and other demographic tidbits, but what about volume over time?

As social media evolves and more people join in the conversation, we can only expect to see recurring events like Fantasy Football being talked about on a bigger scale every year.

Thanks to the date range comparisons in Brandwatch, I was able to see how the volume of mentions moves over time for “Fantasy Football”, as you can see below for 2012 (orange), 2013 (green) and so far 2014 (pink).

The big spike you see around the 250-day mark is for the Transfer Deadline Day, a pivotal day in the Fantasy Football calendar.

Now, while I certainly don’t feel like a Fantasy Football expert, I’ve definitely learnt a lot, more than what I’ve summarised here – and it all took roughly 15 minutes of my time.

And now you know