Which Christmas Ad is Making Social Media Users Feel Warm and Fuzzy Inside?

So tomorrow, ladies and gentlemen, it is the 1st of December, which means that you can legitimately start playing ‘All I Want for Christmas’ on repeat whilst watching A Muppet’s Christmas Carol and writing endless lists of things to buy/do/cook/wrap.

We’ve now had a full month of festive adverts coming at us from every medium possible, as the Christmas mania started the minute the cobwebs of Halloween had been tidied away – most notably the anticipated Christmas TV adverts from all the big stores.

It’s sort of equally brilliant and depressing that supermarkets and department stores have managed to make some of us look forward to them trying to flog us stuff through TV ads, but that is the effect of Christmas on otherwise sane people.

So, which of the stores has won in the competition to get as many festive things in one ad in order to make people feel all warm and fuzzy inside?

We tracked conversation online from Nov 1st to see which of the major stores had created the most buzz with their ad, and whether that buzz was good or bad. 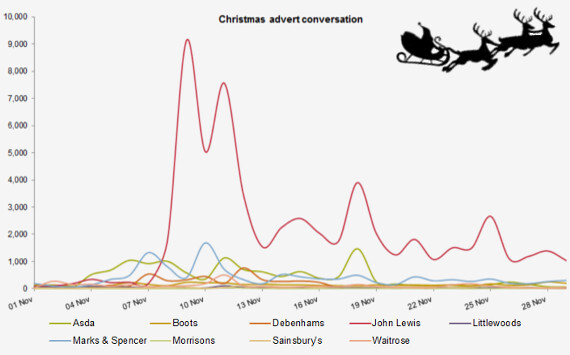 It seems John Lewis’s combination of breathy female cover song, cute kids, snow and £6 million pounds worth of production has them winning the race, as the ad is way ahead of all the others in terms of volume of conversation (although, when compared to the much-loved Coca-Cola ‘Holidays are coming’ ad it is dwarfed, with only just over half the volume of conversation over the same period).

In terms of total volume over the period, Asda comes in at second place, followed closely by Marks and Spencer. 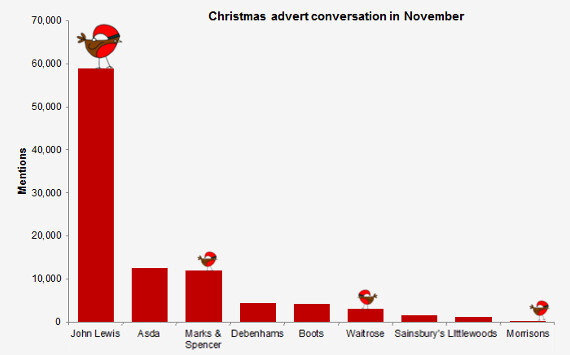 Morrisons barely even gets a look in, with the ad rarely discussed online, and most of the other ads pale into insignificance compared to John Lewis.

But, volume isn’t everything. What about the sentiment of that conversation?

There’s been a bit of controversy regarding the Asda ad, as it has received complaints about it being sexist, and Boots has suffered a similar fate due to complaints about ‘animal cruelty’ (because a dog is shown being dried with a hairdryer. We’ll let you make your own mind up). 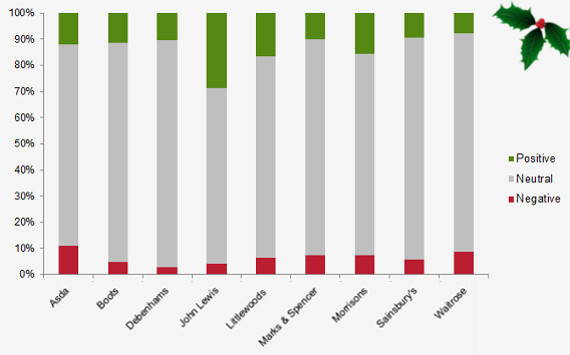 Asda’s ad has the highest proportion of negative conversation compared to the other ads, but does also have a fair amount of positive chat. Waitrose’s charity-themed ad also attracted a fair bit of negative discussion.

John Lewis’s ad, perhaps unsurprisingly, has by far the highest proportion of positive conversation and is the clear winner in the social media stakes, although research has shown that it has been the least effective in actually attracting shoppers.

Littlewoods, after a disastrous ad last year, tried to convince us that they DID believe in Santa by including him in their offering this year, and it seems to have worked – online buzz about the ad was more positive than negative, with 17% positive and 6% negative. Compared to last year’s stats (62% negative tweets, anyone?), the ad is a relative success, despite not being discussed that much.

Debenhams’ advert was the least successful in making viewers feel emotional, with nearly 87% of conversation being neutral.

So what is it about the John Lewis advert that makes people so  enthusiastic about it?

A word cloud based on the emotive conversation about the ad shows that there’s lots of love, both because people say they ‘love’ the ad, but also because of the use of the ‘Power of Love’ song. Most people don’t really give reasons for loving it, they just do.

Asda’s word cloud doesn’t quite have the same amount of loving feeling, although the fact that the grandmother in the ad is reading 50 Shades of Grey seems to have tickled people’s fancy.

If you can’t get enough of the John Lewis advert and need some more snowman-based fun, then be sure to check out the spoof Twitter accounts set up for the happy couple – @john_snowman and @mrsjlsnowman 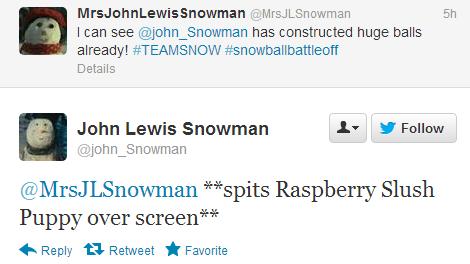