Who’s Got Gold in Social Media Mentions? We Analyze the Olympics Opening Weekend

The Rio 2016 Olympic Games are now underway. The Brandwatch React team analyze how the opening weekend shaped up in social media mentions

Unless you’ve been in a cave all weekend, you’ll no doubt be aware that the Rio 2016 Olympics are fully underway. If you were in a cave, I hope at least there were some decent Pokémon to catch.

Since August 5, the day that saw the opening ceremony of the 31st olympiad, the Rio Olympics have been mentioned over 4,450,000 times online.

The Brandwatch React team have been analyzing the data we pulled from Brandwatch Analytics over the weekend, and we’ve got some tasty insights for you.

In a weekend that saw world records beaten, a 13 year-old swimmer making a splash, an ‘absorbing’ opening ceremony and scandal as Russia was handed a blanket ban for the Paralympics, we’ve been collecting all of the social media mentions.

Before we dive in, quickly get yourself up to speed with the current medal standings.

Climate change, a ‘vision of Brazil’, and a celebration of nations

The opening ceremony saw nearly 875,000 mentions alone between the hours of 7pm EST and 12:30am EST on Friday.

While coverage of the opening ceremony started at 7pm EST, the spectacle didn’t really commence until 7:30pm, and online mentions immediately reacted as they became elevated from then until the ceremony’s conclusion.

The topic cloud below from Brandwatch Analytics shows the most mentioned topics from the opening weekend.

When we examine mentions minute-by-minute over the course of the opening ceremony, three moments rise above the rest. Note the chart below is set at a 10% sample. 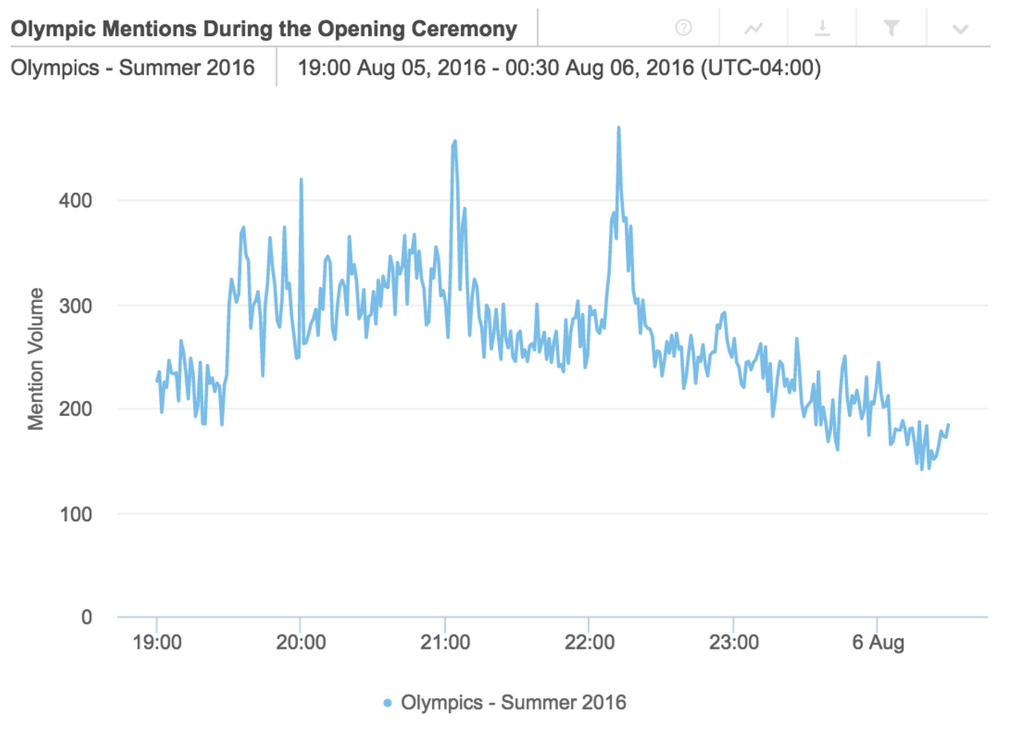 The opening ceremony gold moment, pun absolutely intended, came at 10:12pm EST with around 4,700 mentions in one minute.

These mentions were propelled by the entrance of Team USA and its flagbearer, the man with perhaps the largest wingspan in all of the world, Michael Phelps.

Mentions also noted how this was the first time Phelps has ever participated in the opening ceremony parade, and later would (spoiler alert) express delight at Phelps becoming the most decorated Olympian of all time.

With 10.4 million social media followers, he’s one of the most popular competitors – although his following is dwarfed by Brazilian soccer star Neymar da Silva Santos Júnior’s at 137.8 million. That’s a whole lot of social klout.

The ceremony, with a budget of just 10% of the London 2012 Olympics, was a colorful, original celebration of Brazil – with a focus on global warming and rising seas. The message clearly resonated with viewers around the world, as at 9:04pm EST when the section on climate change was aired we collected over 4,500 mentions in one minute.

As always with these ceremonies, viewers took to the internet to let the world know they were watching.

At 8:00pm EST, with around 4,200 mentions in a minute, we documented the public’s joyful reaction to the beginning of the 2016 games, as well as some Olympians themselves giving the world a behind-the-scenes view of their excitement.

This was amazing!! #OpeningCeremony #OneTeam ?? last post… I promise.. just too excited pic.twitter.com/DApU0Xp9A5

What the world was watching

For the first time in the history of the games Women’s rugby will be played, and we will see the return of golf after 112 years. It’s also the year with the highest proportion ever of women athletes at 45%. What events will net the most attention?

Over the opening weekend the events that received the most attention were soccer and gymnastics, with 12% of all event mentions. Note the chart below is set at a 10% sample. 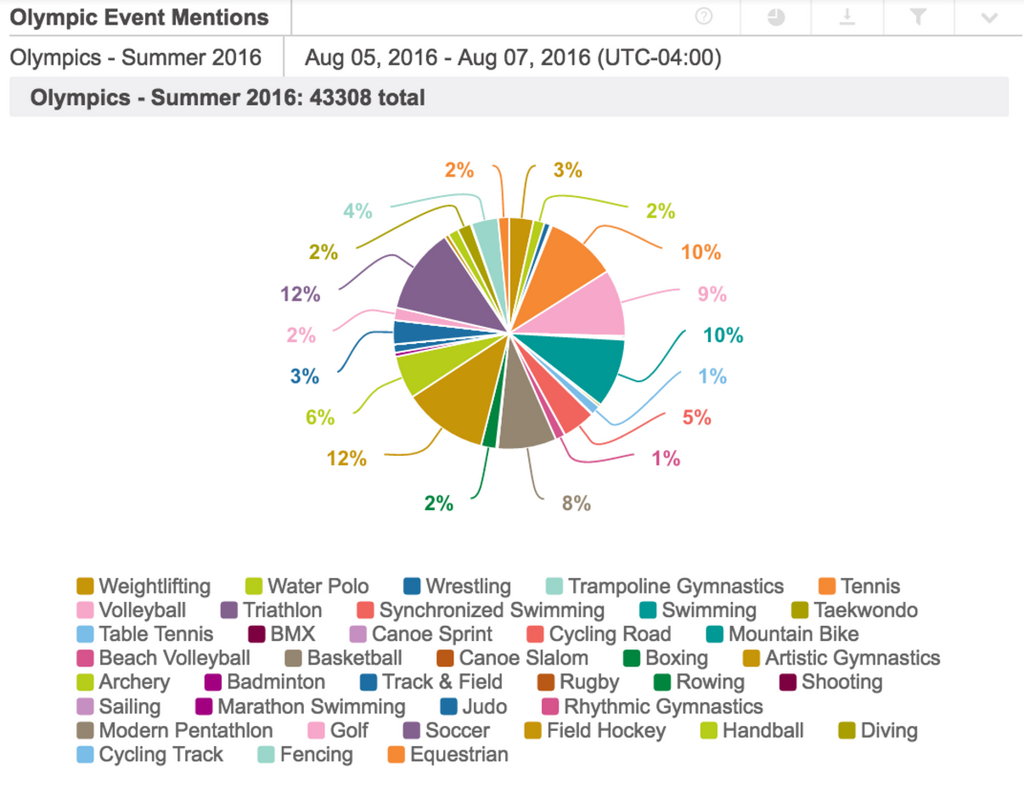 Swimming and tennis follow as they both claimed 10% of all event mentions apiece.

Volleyball rounded out the top five most talked about events with 9% of all event mentions.

The most excellently named Ginny Thrasher, who won the games’ very first gold medal, was a top topic coming out of the first weekend and stole headlines around the world. There were 19,400 mentions of Thrasher on social media. 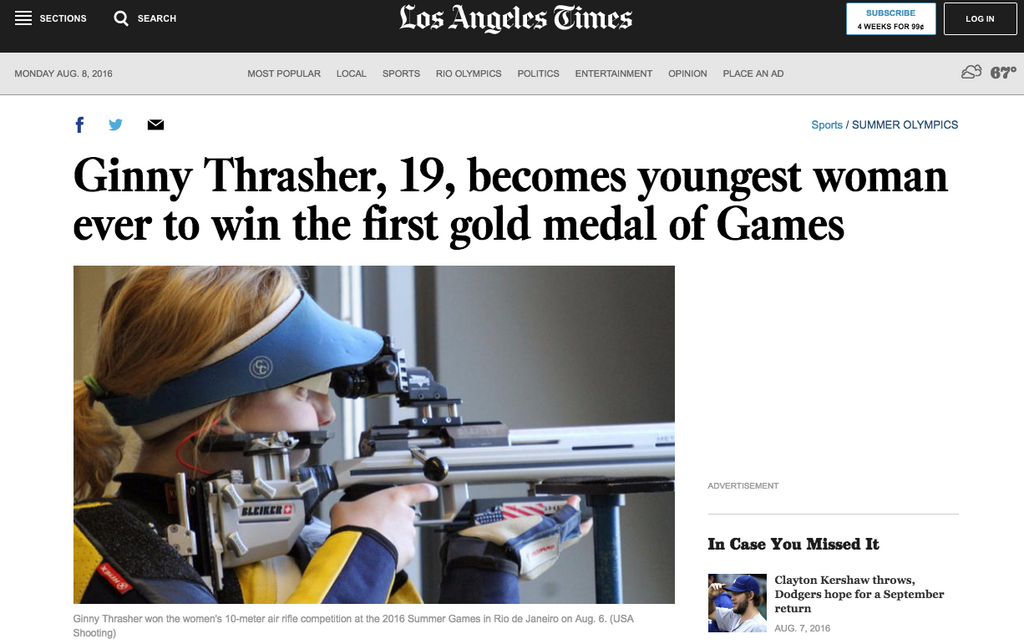 The injury suffered by French gymnast, Samir Ait Said, was also a major theme within the Olympic’s opening weekend conversation at 24,890 mentions.

British swimmer Adam Peaty scooped a gold late on Sunday night, and trended as a major theme within the Olympic conversation, netting 26,240 mentions as we went to press. We can expect his mentions to grow even after this post is published.

Be sure to check back with us to see which moments from these Olympic games make waves online.

Additional reporting by Kellan Terry. Are you a journalist looking to cover our data? We have plenty more. Email us [email protected] for more information.