Who’s Leading CES 2015? Text100 Analyze the Buzz Behind the Event

International CES 2015 is well underway, and with over 3,600 exhibitors spread over 2.2 million net square feet, it’s set to be a record breaking event.

This year, we’ve already heard from tech leaders about the future of robotics, augmented and virtual reality, personal entertainment and emerging trends in gaming. A massive 20,000 products will launch throughout the show – the latest in wearable tech, cars that drive themselves, 3D printing and beyond.

Last month, Text100 in association with partners Redshift Research and Brandwatch undertook a comprehensive study to help brands make the most of their investments in CES.

The study, which compared consumer needs with brand output revealed some interesting points.

Research pointed to a conflict between brand and media use of Twitter and consumers’ use of this channel as a discovery mechanism, and significant disconnects between media interest and consumer desire.

Now that the 2015 International CES has kicked off, Text100’s data team has taken a look at related online conversations to understand who’s driving or, more critically, leading conversation, which brands are dominating discussion and which topics are capturing the imagination of consumers.

Which brands are leading the buzz?

Samsung have dominated the discussion around the event, garnering over 16,000 mentions out of the entire total of 250,000.

It’s clear their large amount of announcements helped them lead overall buzz. However, disappointment in the fact that they weren’t releasing a new phone also contributed.

LG was second with 13,000 mentions, mostly attributed to the G Flex 2 curved smartphone.

Sony came in third with its Walkman ZX2 contributing to more than 10,600 mentions.

Brand talk was big on Twitter, with the site hosting 95% of conversations, Facebook accounting for 4% and online news sites 1%.

While media outlets such as CNET, Mashable, USA TODAY and Engadget dominated the top 10 in terms of online reach, it was interesting to note that individuals also drove online conversations.

Of the 350,000 CES-related impressions tracked, rapper/songwriter/actor and philanthropist will.i.am (@iamwill) came second to @CNET in terms of impressions, undeniably aided by his more than 12.7 million followers. 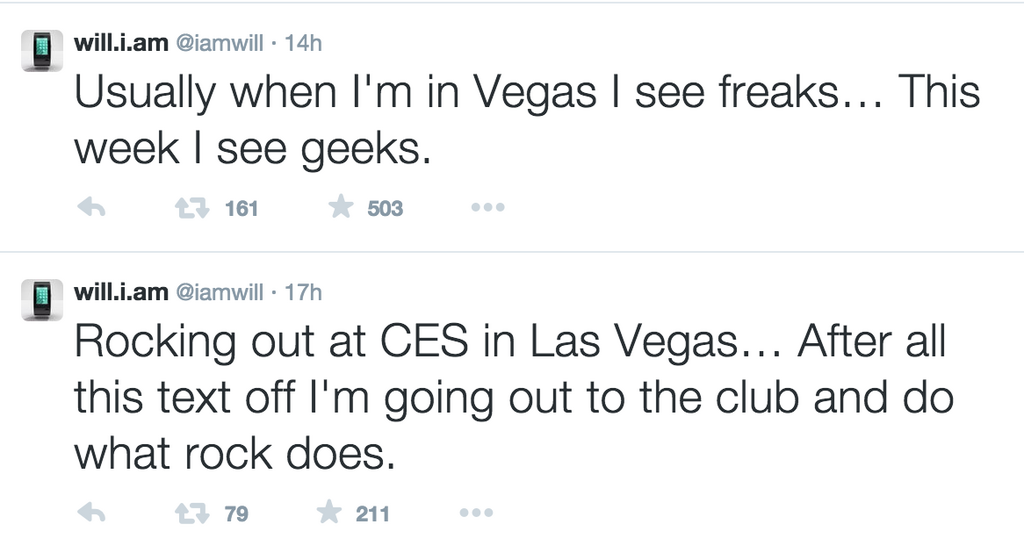 And, importantly, what products are winning the CES race?

The Lenovo ThinkPad and ThinkPad Stack are both in the top 5 most mentioned products so far, at 1st and 5th respectively.

Coming in 2nd is the still much anticipated Apple Watch (thought to be slated for a March release) despite Apple not making any CES announcements, or participating in the show.

Netflix – both a product and brand – came in fourth with 2,500 mentions over the past two days. While in previous years, the talk was all about tablets and wearables, TV and PCs seem to be making a comeback.

Text100 will keep monitoring CES – we’ll be posting our summary here on on Monday. Are you at the event? How are you finding it? Let us know in the comments!

Methodology: Text100 used Brandwatch to monitor online news, Twitter, Facebook and discussion forums between January 5 and 6, 2015. We tracked and analyzed more than 250,000 US CES mentions over this period.