Why Our Employees Spent An Afternoon With Plasticine and Flipcharts

You might have noticed that we’re pretty focused on employee satisfaction here at Brandwatch. We have super cool offices and a great team, and the culture is one of transparency, collaboration and respect.

One of our initiatives is Funky Friday: our dev team are allowed to spend Friday afternoons working on their own projects or ideas – anything that they have a burning desire to develop, but which doesn’t fall under their usual projects.

At the end of the day, everyone presents their ideas and if any of them are good enough – which they often are – they get put into the roadmap and become part of the product.

That means every developer gets the opportunity to shape the direction of the app. Every now and again, we have full day Funky Fridays, complete with pizza and a ‘theme’ to work from (say, ‘authors’). 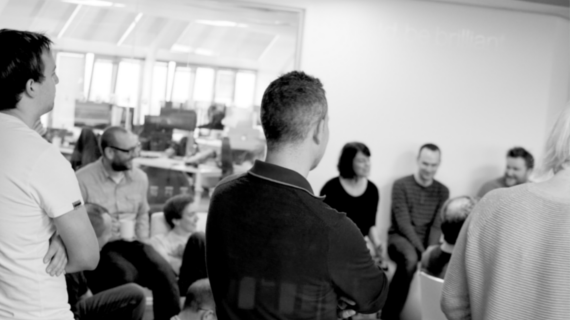 Recently, some of the product team were considering a ‘no code’ Funky Friday, and this led them to think ‘if there’s no code, then why can’t everyone take part?’

Product Manager Glenn White said: “Brandwatch is full of very smart people and we wanted to have a day where everyone could devote their time to new big ideas.”

And thus was born SMAFF – Super Mega Awesome Funky Friday – an afternoon where every employee (from the CEO to the commercial teams to the developers) got to put their brains together and come up with their ideas to make Brandwatch better, which took place last Friday.

Everyone was put into teams of 4 or 5, given an area of the office (complete with nibbles, plasticine, pens, post its and flipcharts) and given about 2 hours to come up with one idea.

The theme? ‘If you knew you couldn’t fail, what would you do to make Brandwatch better?) The emphasis was on moonshots.

At the end of the day, the teams all put together an A1 page explaining their idea and then everyone voted, in secret, for their favourite. The winners were revealed whilst everyone enjoyed a few beers.

Joel Windels, our Lead Community Manager, said: “It was interesting to start thinking about things that shape the entire company and go beyond what constitutes our normal roles. Working with colleagues that you don’t normally cross paths with to think of things no-one has even considered before was a refreshing and unusual experiment.”

There were some fantastic ideas at the end of the day – for now, they’re super secret, as some are now being considered for development in the future. “It was a huge success and we have plenty of moonshots that we can build towards,” says White.

As well as some great ideas, the day was a fantastic opportunity for everyone to work together, and to get involved with the development side of the company.

Account Director Andy Keetch says: “SMAFF lived up to its name, and it is an excellent way to show that ideas can and should come from all parts of the business. I loved that everyone got to contribute, throw ideas about, and get working towards making more cool stuff happen”.

We’d recommend every company to do similar. Big ideas can come from anyone, no matter what their title!