At some point in the not too distant future, Virgin CEO Richard Branson is sending the Winklevoss Twins into space.

A currency with a market now worth $5.7 billion, of which the twins own 1%. The digital currency in question?

What on earth is going on?

If this all sounds utterly insane to you, you’re not alone.

The whole Bitcoin story is a web of weirdness and wonderfulness, from a shadowy creator known by the alias “Satoshi Nakamoto” (who may not even exist), to the confiscation of $33.6 million worth of Bitcoins from Silk Road founder Ross Ulbricht – this is a currency wreathed in mystery, controversy, scandal, suspicion, notoriety and, above all, seductive promise.

In fact, according to the Winklevoss Twins in a recent Guardian interview, Bitcoin will be bigger than Facebook:

“Bitcoin potentially could be more impactful because being able to donate 50 cents to someone across the world has more impact than potentially sharing a picture, […] but they’re very different. Facebook is like the internet – a large company and an application.”

Before we go any further, you’ll likely have all sorts of questions about Bitcoin (unless you’re already merrily mining them yourself). To get clued up quickly before we continue, take a look at Choice Loan’s ultimate interactive guide to the currency.

Meanwhile, if you’d like some more industry commentary to wrap your head around, here’s Branson discussing why Virgin are now starting to accept Bitcoin:

The Winklevoss twins may believe that Bitcoin will be bigger than Facebook, but recent research by Socialbakers hints that social media and Bitcoin are inextricably linked.

According to their findings, as Bitcoin’s value rises, so does the currency’s number of Facebook fans and Twitter mentions.

Essentially, this research suggests that measuring mentions and fans could predict Bitcoin value as it rises and falls.

Whether or not Bitcoin’s value is the metaphorical “chicken” or the proverbial “egg” in this relationship remains to be seen.

Does positive social activity actively boost Bitcoin price or do rising Bitcoin values increase buzz and positivity around the currency on social media? We’d be interested to hear your thoughts! 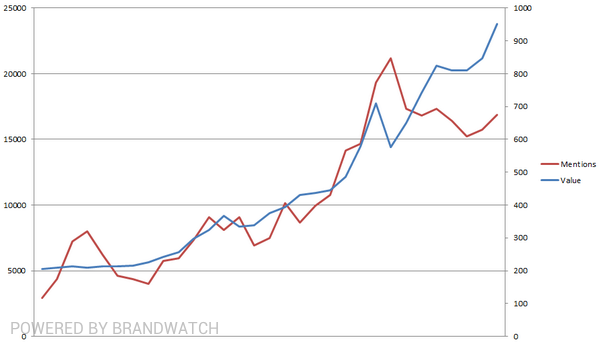 Daily mentions of Bitcoin alongside the currency’s value for November, gathered using Brandwatch.

With social networks so closely related and tied into Bitcoin’s story, this is an almost impossible question.

As the Winklevoss bros. (who should know better than most) explain, a digital currency and a social network are very different things.

Yet, at the same time, as Socialbakers’ and Brandwatch’s data clearly shows, the application and the currency have almost a symbiotic relationship. They’re not only completely incomparable, they’re also inextricably linked.

This twisted relationship makes the question of whether or not Bitcoin will become bigger than Facebook something of an irrelevance.

When it comes to the social good which Bitcoin (hypothetically) could do, the possible benefits to society could vastly outweigh the societal good of social media.

Twitter, Facebook and their ilk may connect people globally, increase transparency across borders and give every person a voice – making the world that much smaller – yet the potential benefits of Bitcoin are global and monumental, including:

When asking the question “will Bitcoin be bigger than Facebook?”, the potential knock-on, global effect could indeed prove more significant. Yet, there’s a very long road between Bitcoin as it stands today and Bitcoin’s ultimate goals.

Meanwhile, if by “bigger” we’re talking about uptake and usage – that remains to be see. Currently there are 1.23 billion Facebook accounts used actively each month. Meanwhile, 225 million people have active Twitter accounts. By comparison, here are a few Bitcoin statistics, uncovered by John Ratcliff, to give you an idea of scale:

As you can see, there is a very long way to go before Bitcoin has the kind of user base of the social media giants. But could it get bigger?

Well, that’s unlikely to happen overnight. There is still a lot of uncertainly, confusion, distrust and downright fear surrounding this digital currency, which means that not many people are likely to leap onto Bitcoin’s bandwagon just yet. 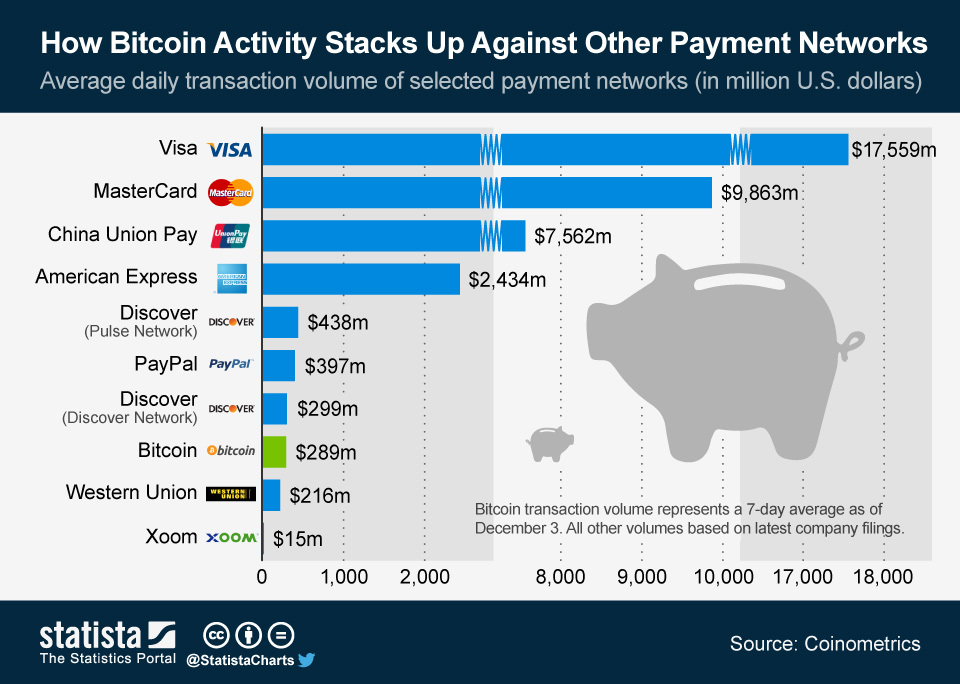 The currency is as yet largely untested, unregulated, not overtly accepted by any government, difficult to factor into your income tax and, generally speaking more complicated to get started with than simply opening a Facebook account (with greater consequences).

The answer to our question, therefore, is “possibly, one day”.

Financial and political decisions will have a huge influence on how “big” Bitcoin becomes but one day, maybe, we could be paying with Bitcoin as easily and breezily as we now update a Facebook status.