The Winners and Losers on Social: The Importance of Brand Identity

A poorly-conceived hashtag can swiftly become a full-blown PR disaster for your brand identity. Some of the worst disaster:

Social media blunders occur in the public domain, and are therefore highly visible. As companies such as CelebBoutique and McDonald’s know, a poorly-conceived hashtag can swiftly become a full-blown PR disaster for your brand identity.

However, it doesn’t necessarily take a cataclysmic error to damage a brand’s online image. Twitter is awash with companies whose social media campaigns are actually hampering their success. We take a look at some companies with big personalities online.

Even the most dynamic Twitter accounts occasionally publish boring updates, and followers are generally willing to forgive and forget.

However, Dr Pepper is a repeat offender. Their account has been known to tweet more than twenty times in a single day, and their posts are generally pretty uninformative.

This is just a small selection of tweets from September 28: 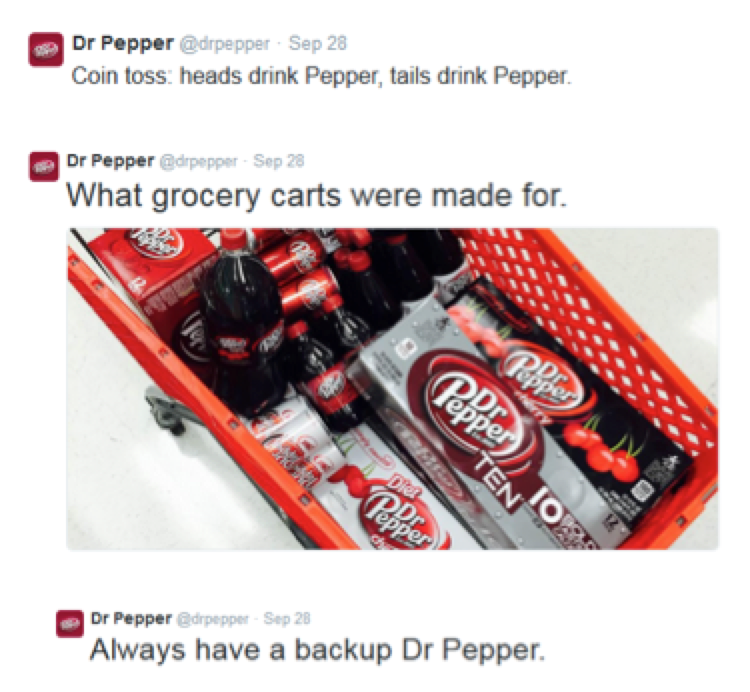 These messages are merely serving to remind followers of the brand’s existence. This tactic is useful in moderation, but twenty attention-seeking tweets in one day is a sure-fire way to lose followers and alienate customers.

However, these useful tweets are generally drowned out by the waves of irrelevant content.

Humour can be an effective tool on social media – but only if executed well. Poorly-formed ideas and half-jokes will attract little follower engagement, and are ultimately a waste of time. Pepto-Bismol get it right on Facebook.

Twitter is home to plenty of branding disasters. However, some companies are online maestros. The Twitter feed of British supermarket Sainsbury’s is a fantastic example of solid social media marketing.

The Sainsbury’s account only interacts with relevant real-world events. They put together purpose-made images, engage with the official hashtags, and join in the general online ‘noise’ around an event: 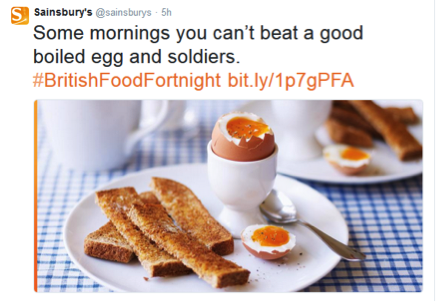 They also post strategic tweets during the advert breaks of popular and relevant TV shows, when a large number of their followers are likely to be online: 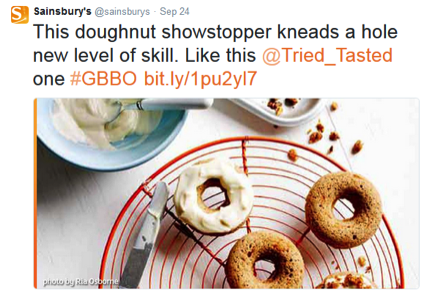 Image-heavy content tends to do well on Twitter – but only if the pictures are of a high quality.

A large proportion of Sainsbury’s tweets include an image, making for a colourful and visually attractive feed. It’s clear to see each photograph has been staged professionally, potentially by an in-house photographer: 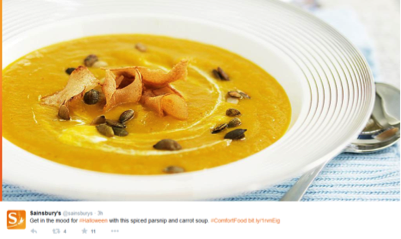 Your own photography skills may leave something to be desired. However, by hiring a professional photographer for the day, you can cheaply create a bank of images to use in future posts.

Popular social news site BuzzFeed has seen unrivalled levels of success since its launch. This is partly due to their standard tactic of creating posts which people can relate to on a personal level. The Sainsbury’s Twitter account also sees success with this method:

As the Sainsbury’s account shows, it is possible for brands to create an effective and authentic Twitter strategy. However, even multinational corporations can fall victim to the common pitfalls.

When developing your own plan, spend some time observing other corporate accounts. Identify the most (and least) popular posts, and use these insights to guide your own online strategy.