The Woman’s March: Why We Marched

A social media history of the Women's March.

Last week’s Women’s March was a uniquely emotional event. Across the globe, millions gathered to express a complex brew of emotions: anger about the incoming president, fears about the country’s future, and joy over banding to fight together.

These swirling, often contradictory emotions can be hard to parse, but doing so helps us understand the causes and results of the historic, record-setting protest.

Because social media was such an instrumental force in spawning, spreading, and sharing the message of the march, we decided to track it over several social networks. We used social media analytics to analyze the emotions and issues that catalyzed the march, as well as the people and events that brought the Women’s March together, and how these all relate to a volatile moment in America’s history.

Of course, it all starts with the election — so let’s start there.

As we’ve discussed in the past, fear and disgust dominated last year’s presidential election. Even compared to other contentious campaign cycles, 2016 was all about the negatives. 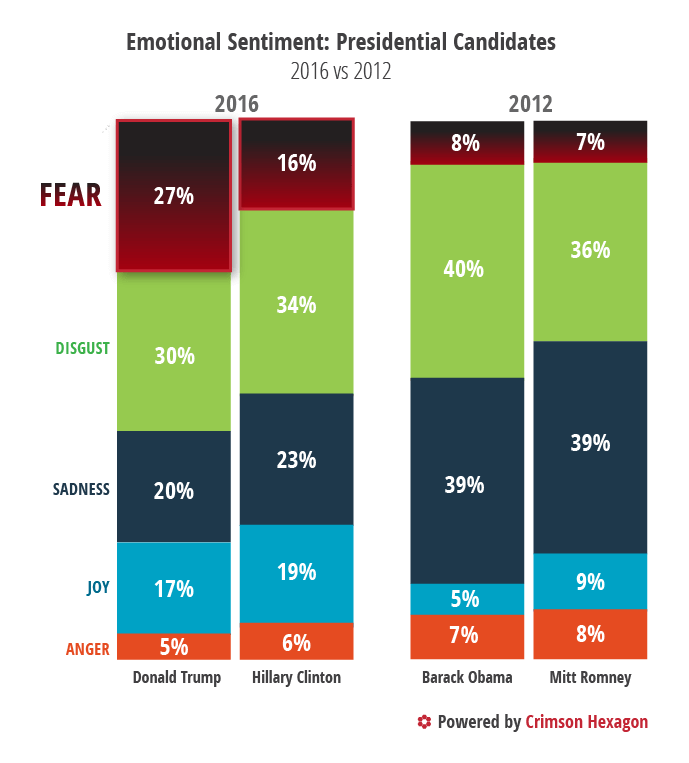 When we compared the pre-election social conversation and the post-election discussion, we found that one emotion grew much more than the others.

What’s the story here? Why has the social conversation surrounding the presidency become more joyful since the inauguration of a uniquely divisive president?

This is where the Women’s March starts to enter the picture. When we dug into the joy sentiment of the overarching conversation, we found an interesting answer: the uptick in joy surrounding America’s new president is due largely to the Women’s March and the protest and advocacy that has bloomed since Donald Trump’s victory. 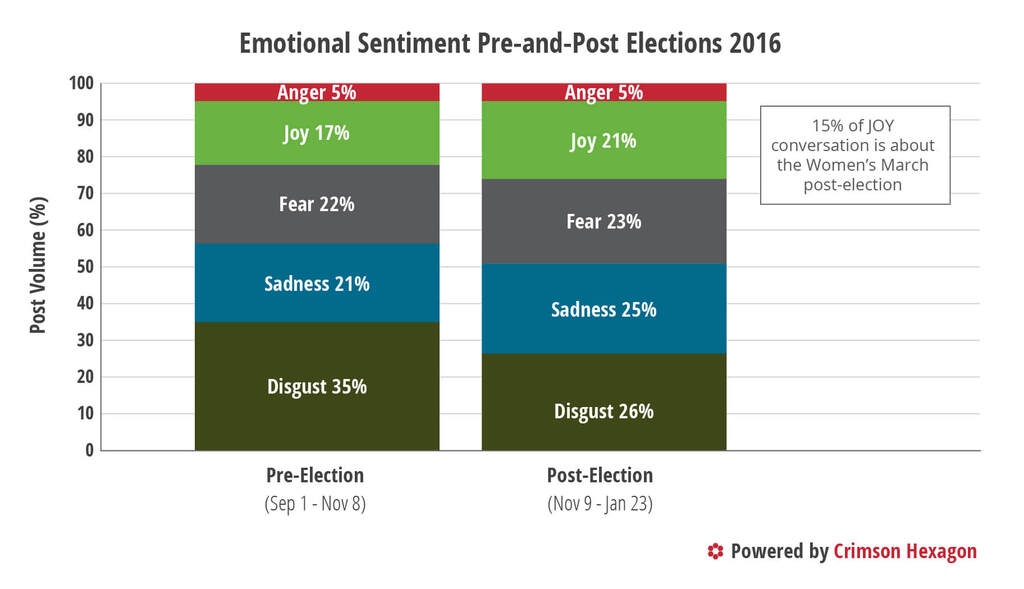 On the surface, the increase in joy may appear to be caused by Trump’s supporters celebrating their candidate’s victory, and the appointments and policies he has made since his victory. But when we dug in, we found that a full 15% of that conversation was not about supporting President Trump, but protesting him, specifically through the Women’s March.

Almost overnight, the sadness and frustration that affected the hundreds of millions of Americans upset over Trump’s victory started turning into the more nuanced emotions of protest.

On the actual day of the march, January 21st, there were over 11.5 million posts shared on social. This was over 1.5 times more conversational volume than the presidential inauguration the day before. Hoping to turn a negative into a positive, activists across the country (and the world) started organizing a protest that could sublimate fear, anger, sadness, and frustration into something more potent and proactive.

But protests are not based entirely on emotions; they are also built on issues.

The seeds of the protest

The emotional analysis of the social media conversation surrounding the election, the candidates, the inauguration, and the march give us a better understanding of the varied and complicated emotions racing around the country these days, but what can they tell us about the specific reasons so many people took to the streets?

Here were the primary reasons people mentioned for joining the march. 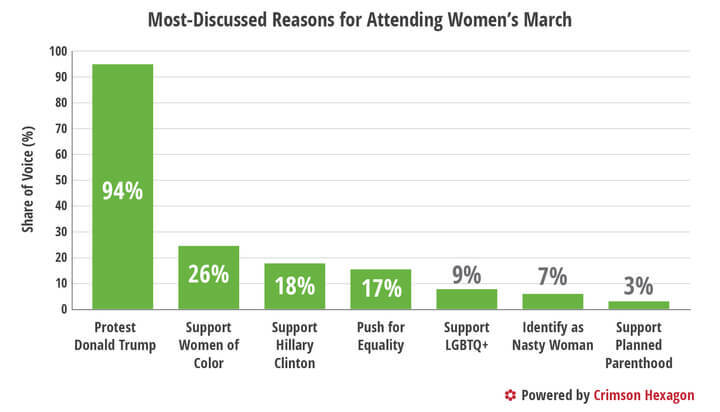 Below the nearly universal intention of “protesting Donald Trump,” the Women’s March folded in issues from several other important ongoing causes. In fact, the movement expanded organically, and a popular hashtag — #whyimarch — started making the rounds on social media to catalogue the many reasons people joined the cause.

When we analyzed the hashtag, we found a collection of words and phrases that represent a wide range of catalytic issues, including: equality, human rights, equity, respect, democracy, and racism. Clearly, the Women’s March grew to encompass many of the issues that dissenters worry a Trump presidency threatens to undermine. 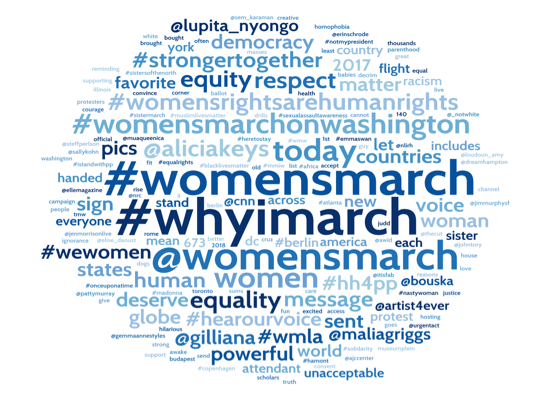 But the causes of the march, identified by our social media analysis, only give us insight into the roots of the protest — but what about the response? How did the march resonate with global audiences and ricochet across social platforms?

Given that it was largely responsible for organizing and promoting the Women’s March, it is no surprise that social media was also essential to the coverage and response-sharing of the protests. 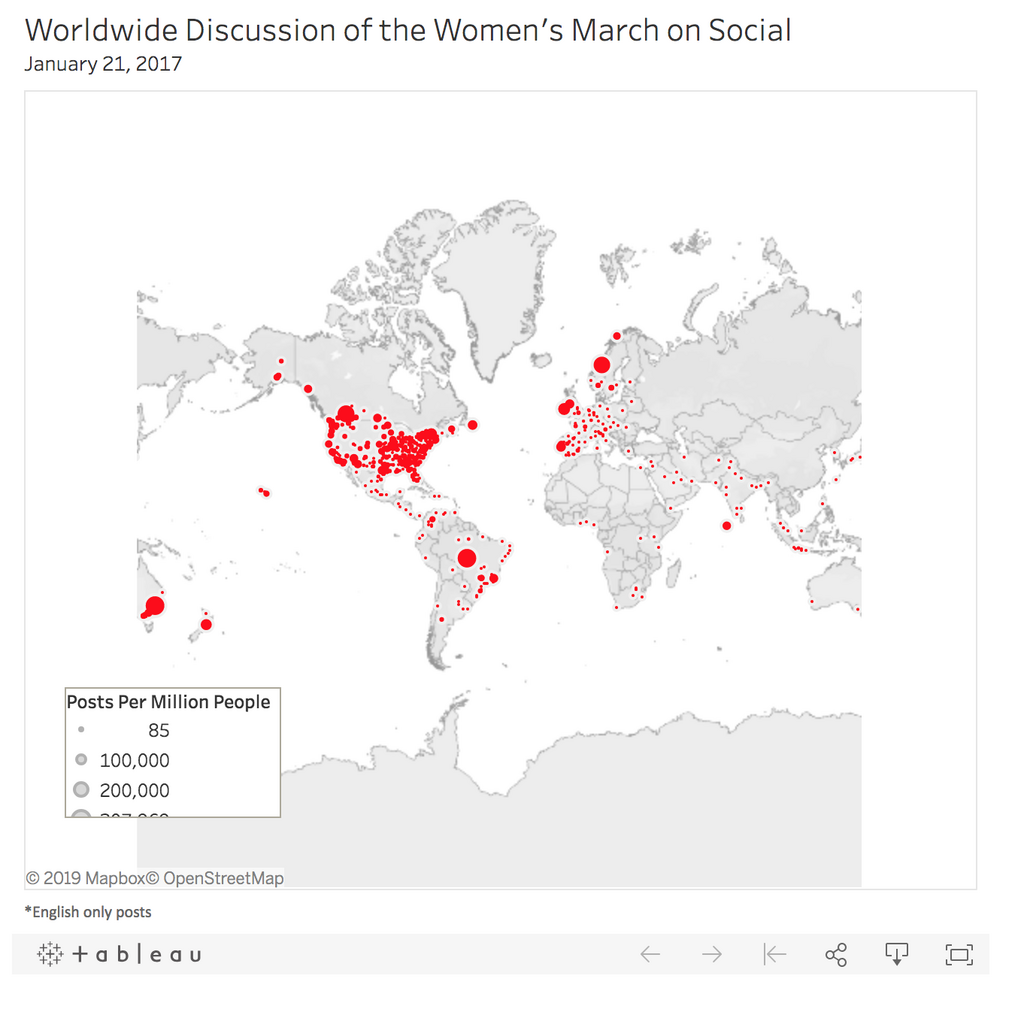 People from every corner of the earth (including Antarctica!) used social media to share their experiences about the march, their stories, and, of course, their favorite signs.

The legacy of the Women’s March

Not everyone agrees about the impact or execution of the Women’s March, but almost everyone agrees on one thing: It was just the beginning. If the attendance and social volume is any indication, we can expect an uptick in protesting and activism. And social media is likely to play an increasingly important role in how people plan, carry out, and share their experiences of protests.